All quiet on Israel's northern front

The likelihood of a war in Lebanon and Syria is low as the Jewish state marks 69 years of independence. 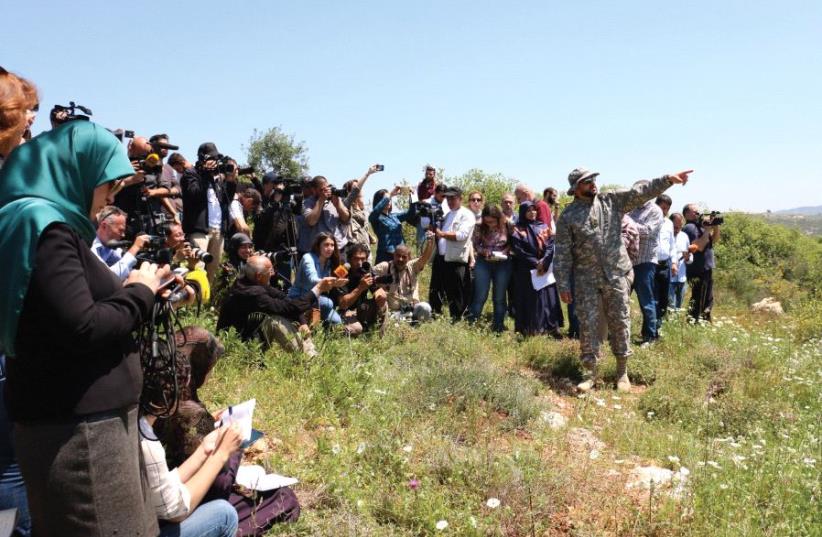 A Hezbollah commander briefs press members on April 20 about Israeli military positions along the border with Lebanon
(photo credit: AFP PHOTO)
Advertisement
ON APRIL 20, Hezbollah took Lebanese journalists on a tour of the Israeli border led by a commander of the Shi’ite militia in full combat uniform. According to the 2006 cease-fire agreement between Israel and Lebanon under the terms of United Nations Security Council Resolution 1701, Hezbollah personnel are prohibited from wearing military fatigues or carrying weapons along the border. Only the Lebanese army is entitled to do so.Israeli military commanders and the government took the televised tour lightly.They know that it was aimed for domestic consumption, rather than as a threat against Israel. The tour was an exercise in public relations to demonstrate that Hezbollah has not abandoned its commitment to the struggle against Israel.To see the Israeli positions, there is no need for Hezbollah’s guided tours. Anyone traveling along the border region on the Lebanese side can see the Israeli fortified military posts with their bunkers and antennae, border obstacles and army patrols.What the tour shows, above all, is the troubled situation of the Shi’ite movement.

HOWEVER, ISRAELI non-interventionism has a few exceptions. One is that the IDF will respond and retaliate in measure to any “spill over” of the war in Syria across Israel’s border regardless of who is the source of fire – be it the Assad regime or the rebels ‒ and whether or not it is intentional.Another exception is that Israel acts against efforts by Iran and its proxies (Hezbollah and other Shi’ite militias) to gain a foothold near its Golan border. “We will not tolerate an Iranian presence near our border,” another senior military source tells The Jerusalem Report.At the same time, Israel uses its air force from time to time to bomb convoys and warehouses of advanced weapons (longrange accurate missiles) on their way from Iran via Syria to Hezbollah. These air strikes are delicately executed to avoid unintended clashes with Russian fighter planes in the skies of Syria, using the joint “deconflicting” channels set by Israel and Russia.US Secretary of Defense James Mattis visited Israel in mid-April to assess the situation in Syria and confirmed what Israeli intelligence had already revealed ‒ that it was the Assad army that launched the sarin gas attack near Idlib against civilians earlier in April.In talks with his Israeli counterpart, Defense Minister Avigdor Liberman, Netanyahu and Chief of Staff Lt.-Gen. Gadi Eisenkot, both sides concurred that despite its military victories of the last year, the Assad regime continues to face obstacles to enlarging its sphere of control in Syria. This is because Assad’s army is exhausted and overextended after six years of bloodshed, while Hezbollah and the other Shi’ite militias are reluctant to engage in major direct battles against the rebels.This realization, out of frustration and despair, pushed the Assad regime to use some of its “residual capacity” of chemical weapons (as much as three tons out of its once massive stock of 1,300 tons) in the last sarin attack.“The war is not going to end soon,” says the third senior military officer who spoke with The Report. “And international efforts to reach a diplomatic solution are not succeeding.” Yossi Melman is an Israeli security commentator and co-author of ‘Spies Against Armageddon.’ He blogs at www.israelspy.com and tweets at yossi_melman.