Jonathan Spyer reports from a regime sponsored tour of war-torn Syria and finds rampant antisemitism and empty rhetoric that fails to disguise the dictator’s flimsy grip on power. 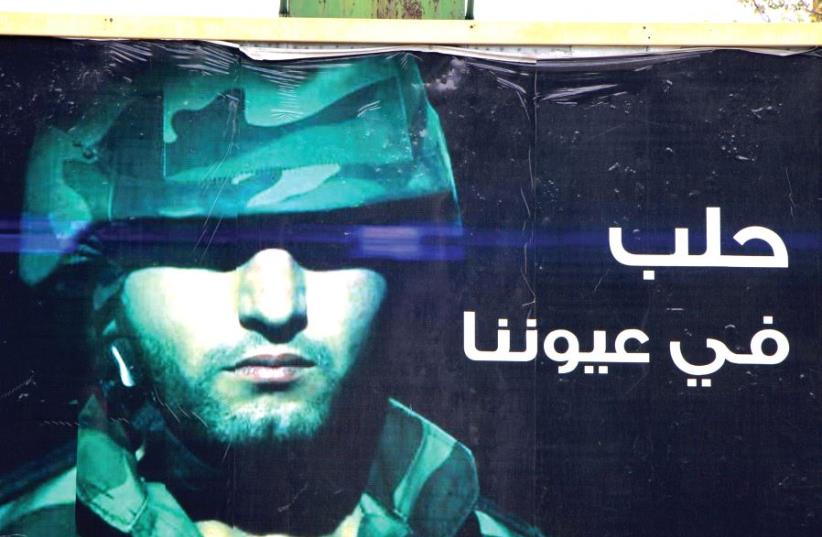 A poster placed by the Syrian authorities in western Aleppo shows a member of the security forces and reads ‘Aleppo is in our eyes’
(photo credit: JONATHAN SPYER)
Advertisement
THE MORTAR shells came early in the morning at about five. At regular intervals. Solemn and sinister. They were a reminder of how close it all was.We were in the Damascus Old City. There was still fighting in Jobar, about two kilometers away. The rebels had also counter - attacked from the east, from the suburbs in eastern Ghouta, the previous week. A shell had landed in the precinct of the Umayyad Mosque.This was not in accordance with the line being promoted by the regime, ac- cording to which the rebellion was on the verge of defeat. But there it was. 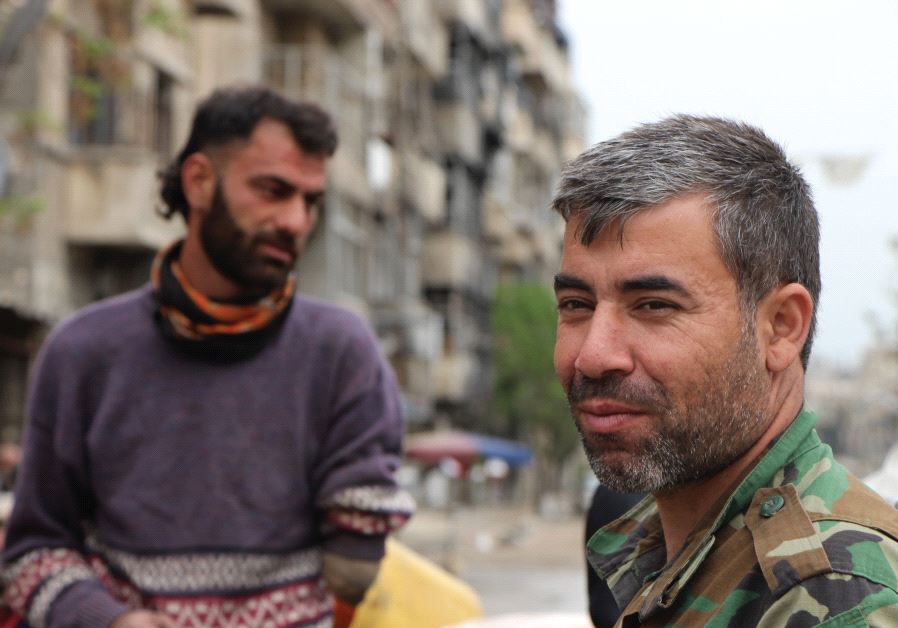 A volunteer with the Iranian-trained National Defense Forces is seen with a disabled veteran of the Syrian Army in the Bustan al-Qasr neighborhood of Aleppo (Jonathan Spyer)
THE REGIME has been advancing since the intervention of Russian air power on its behalf in September 2015. But the advance is slow, and it remains doubtful if Assad will ever have sufficient strength to reunite the entire country under his rule.By itself, the regime is very weak. The Russian contribution is decisive in the air.Iran and its proxies are the key element on the ground. The Assad regime, from the outset, has rested on a narrow base of available support. The Iranians have trained the auxiliary forces that make up the numbers, like the NDF that guards the Damascus Old City. Tehran’s proxies – Lebanese Hezbollah, the Iraqi Shi’ite militias, the Afghan Fatemiyun and others – play a vital role on the ground.Without Russian and Iranian assistance, a total regime victory is impossible. The unanswered question at present is what the Russians want. They, above any other force, control the direction of the war between Assad and the rebellion against him.In the meantime, Russian paratroopers in uniform stroll cheerfully through Damascus and Aleppo, and the regime-controlled part of Syria has effectively become a proxy, or puppet, of Moscow and Tehran’s interests.Controlled from above, the Assad regime is also subject to fragmentation from below.There are more than 100 pro-regime militias active in the Syrian war constituting around half of the available troop strength available to the regime. These militias are not mere servants of Assad. Rather, they are centers of power and resources for the men who control them. Some are small local groups, numbering just a few dozen fighters. Others are countrywide and make use of heavy weapons including armor and artillery.So the “regime” side in Syria today isn’t really a single entity at all. It is a coalition of interests, of which Assad and the power structure around him constitute only a single part. But it is in the interests of all these elements that the Assad regime present itself as a single, united and sovereign force. The regime’s antique Pan-Arab nationalist rhetoric and the echoes it finds among some elements in the West and the Middle East are a part of this.We entered Aleppo via the Sheikh Najjar industrial district in the east of the city. The destruction wrought by Russian air power on formerly rebel-controlled eastern Aleppo is chilling, awe-inspiring in its proportions ‒ whole neighborhoods reduced to rubble and rendered uninhabitable. Moscow employed the means of total war on the city. What remains is mostly silence. Just a few families have returned and are living among the ruins.I have been in Sheikh Najjar once before.That was in the summer of 2012 when the rebellion had just broken into the city. I remembered it as we walked among the desolation.It was before the rebellion had taken on its definitively Sunni Islamist character – though the signs had already been prominently there. I remembered the constant noise, the government planes overhead, the commanders of the long defunct Tawhid and Afhad al-Rasoul brigades in the Shaar and Saif al-Dawli neighborhoods, and the terrified civilians in the basement of the Dar al-Shifa hospital as the regime aircraft dropped their bombs outside. Dar Al-Shifa is long since destroyed, of course. The civilians have gone, too. Replaced by silence and ruins. A massive poster of Assad and his brother Maher is mounted at the entrance to the Aleppo Citadel.“Congratulations on your victory, O Aleppo,” it reads. Another, seen all over the western part of the city, depicts a stern, helmeted member of the security forces and reads “Aleppo is in our eyes.” This has a double meaning in Arabic ‒ “We are watching Aleppo,” but also “Aleppo is precious to us.”This is the way the Assad regime speaks to its subjects. A threat, lightly coated in a sickly sweet rhetoric.Western Aleppo, nevertheless, appears superficially untouched by the war. The rebels, entirely lacking in air power and with only primitive, improvised artillery, were never able to make a serious impression on it. But the regime’s hold is narrower than it appears. Even now, the rebels are not far from the city; they are located just northwest of Aleppo in Kafr Hamrah and Huraytan.The strained normality of the street scene in the west of the city is punctuated every so often by deep, ominous booms of artillery fire from somewhere not very far off. The war is not over. Nor has it gone away.A single highway snakes its way south of Aleppo through regime-controlled territory, with the rebels to the west and Islamic State to the east. At its narrowest point, near the town of al-Sa’an, the government controlled area is just a few kilometers wide. You must take this road to get from Aleppo to Homs.The devastation in Homs is, as in Aleppo, breathtaking ‒ whole neighborhoods turned into wasteland, rendered uninhabitable.Homs was one of the nerve centers, the heartland of the revolt against Assad. Destroying the rebellion there meant destroying much of the city itself. This, the Russians have undertaken and largely achieved.Our guide in Homs was an ebullient Alawite Syrian lady named Hayat Awad who was brimming with vim and confidence, and contempt for the “terrorists,” as she called the rebels. She wore a pendant around her neck, showing the face of one of her sons who died fighting the rebellion while serving in Assad’s army. 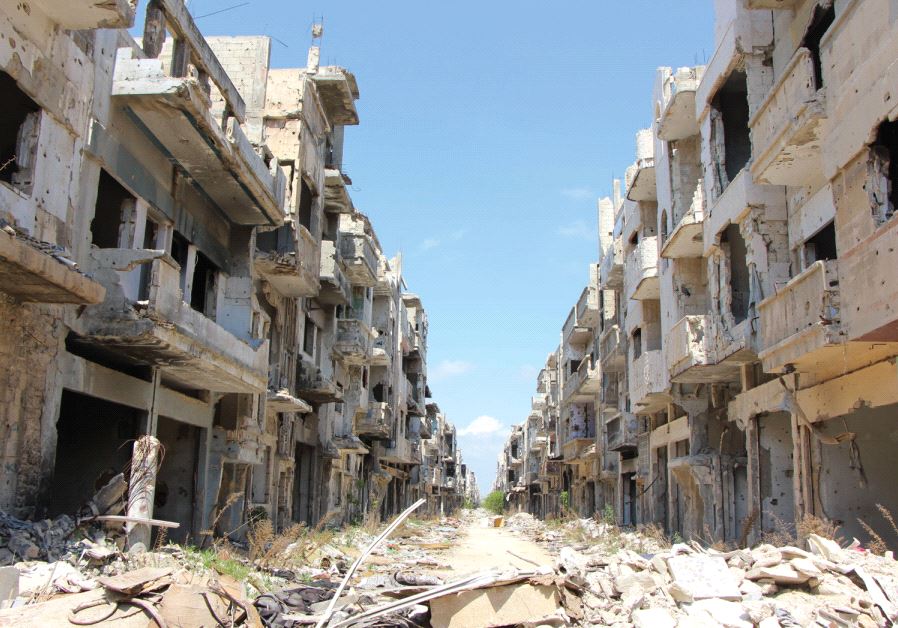