Israel and Egypt: Between alliance and rivalry 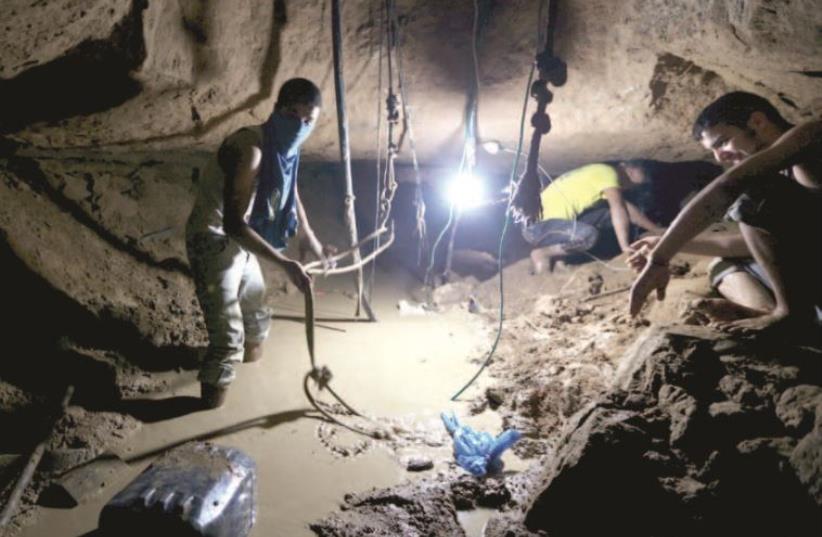 Gazans repair a smuggling tunnel, flooded by the Egyptians, beneath the border between Egypt and Gaza, November 26.
(photo credit: REUTERS)
Advertisement
THE ILL-ADVISED declaration on February 6 by Infrastructure and Energy Minister Yuval Steinitz that Egypt had flooded some of Hamas’s Gazan smuggling tunnels at Israel’s request brought attention to an important development: Israeli-Egyptian relations have over the last two years reached an unprecedented level of mutual understanding and cooperation, primarily on security issues.To that end, Israel has allowed Egypt to introduce larger numbers of troops and heavy weapons into Sinai than allowed for in their peace treaty, and Egyptian F-16 fighter jets and Apache helicopters now operate against jihadi insurgents within sight of the Israeli border.

The two countries are also like-minded regarding what they both view as the negative behavior of Hamas, the unwelcome efforts of Turkey to play a bigger regional role, and Iran’s power projection in the region.Egypt’s approach to relations with Israel is two-pronged and contradictory.It is guided by a) strategic, political and economic interests and b) Egypt’s self-perception and view of “the other,” as understood by various domestic actors.It is this latter category that places fundamental limitations on the relationship, in addition to the continuing differences over the unsolved Palestinian-Israeli issue.First, the half or three-quarters full glass: The continued absence of war and extremely low likelihood of war for the foreseeable future.Egyptian military, political and economic elites have long understood that war was not in Egypt’s interest, while peace opened the door to vital American, and other Western, aid and investment.Following the gradual ascent to power of the Muslim Brotherhood following Hosni Mubarak’s overthrow in 2011, Israel’s worst fears – the return of a hostile Egypt ‒ seemed on the verge of being realized.But for Hamas, the Palestinian offshoot of the Brotherhood, it was a false dawn. The Sisi regime, in power since July 2013, has taken off the gloves, accusing Hamas of providing vital support to Islamist militants who are drawing the blood of Egyptian security forces in Sinai.On the diplomatic level, the improved Egyptian-Israeli relationship is reflected in the fact that both countries are now again represented by ambassadors after a hiatus of some years.Economically, on the other hand, the level of trade and investment remains low, and the whole issue of newly discovered natural gas fields in both countries suggests that they will be more competitive than cooperative on this matter in the future. On cultural and ideological levels, the dominant view among Egypt’s political classes has long been one that views Israel as an aggressive geopolitical rival and competitor. “Normalization” (“tatbi”) in the social and cultural realms remains a taboo for most Egyptians.A recent study by Esther Webman of the Moshe Dayan Center for Middle Eastern and African Studies highlights another fundamental obstacle to warmer Egyptian-Israeli relations. The image of the Jew as villain, she demonstrates, has been adopted by competing political and religious factions in Egypt and other Arab countries in order to explain the changing circumstances and catastrophes that have befallen Arab societies, particularly in the wake of the Arab Spring.Examples from Egypt abound. During the Tahrir Square protests of 2011, anti-Mubarak signs included the drawing of a Star of David on the forehead of president Mubarak. Muslim Brotherhood journalists protesting Abdel Fattah el-Sisi’s coup in 2013 declared Sisi to be Jewish and that Egypt was now under Zionist occupation.Similar rhetoric has been directed against the Muslim Brotherhood by the pro-Sisi camp, which has created elaborate anti-Semitic conspiracy theories regarding the Brotherhood. They range from the claim that both parents of its founder, Hasan al-Banna, were Moroccan Jews and Freemasons, to the Brotherhood’s supposed adoption of the plans of the “Protocols of the Elders of Zion” to undermine Egyptian society.Overall, the gap between Egypt’s self-image and its capabilities is yawning. Israel’s success holds up a mirror to Egypt’s regional and domestic weaknesses, reinforcing long extant tendencies to view Israel in a negative light. Hence, the prospects for long-term improvement in Egyptian-Israeli relations will continue to be inhibited by socio-cultural and political-ideological factors that touch on the fundamental core identity and self-image of the Egyptian polity, even as the two countries quietly deepen cooperation in the security and intelligence-sharing areas.And, of course, peace between Egypt and Israel remains a comforting constant in the turbulent Middle East.  The author is a professor in the Department of Middle Eastern and African History and Senior Research Fellow at the Moshe Dayan Center for Middle Eastern and African Studies, Tel Aviv University.The column is based on a presentation given at a symposium, ‘Israel in a Changed Middle East,’ held at the Rubin Center for Research in International Affairs, IDC Herzliya.