Religion and state: The minority rules

A new poll reveals Israelis' changing views on the separation between religion and state.

By DAHLIA SCHEINDLIN
JANUARY 16, 2012 13:40
ultra Orthodox woman_521
(photo credit: Marc Israel Sellem)
Advertisement
The storm over Haredi (ultra-Orthodox) acts of “women’s exclusion” highlights another angry battle of values between religious and secular elements of Israeli society.Gender-relations is the current focus following several incidents: religious soldiers walking out of ID F ceremonies with women singing, the “Rosa Parks” incident when a woman refused to move to the back of an unofficial, but de facto segregated bus, and the appalling verbal abuse by Haredim of an eight-year-old girl in Beit Shemesh. These have added to the high tensions already flaring around signs in some Haredi areas calling for separate sidewalks and the refusal to allow advertisements with pictures of women to be posted in their neighborhood.What is the public’s response? In mid-December, a passionate demonstration with an impressive turnout of roughly 4,000 was held in Beit Shemesh, organized by civil society groups and attended largely by local residents, both secular and religious.But what next? Will the public demand systemic change? The storm of commentary seems to fall loosely into two or three discernible major streams: There are the outright condemnations of the Haredi community and alarm bells about growing fundamentalism; others defend the majority of Haredim and point to “bad weeds” – imploring citizens to avoid generalizing and employ humanity, tolerance and respect for the other. Another response has been to highlight hypocrisy by pointing out either gender inequality in the non-secular world and government policy, and, as many commentators have done, to link women’s equality with minority rights in general.There has been little discussion about a political system in Israel that inextricably links and even partly conflates religion and state. Although just 9-10% of the population, Haredi parties sit in the Knesset and in nearly all governing coalitions. The ultra-Orthodox continue to control enormous areas of daily life through the Rabbinate and the Interior Ministry. This forces citizens to use Haredi institutions in order to realize their basic rights to marriage, divorce and burial, as well as determination of Jewishness, kosher licenses for businesses and more.The political system thus gives powerful and disproportionate legitimization to a minority whose values largely contradict liberal domestic norms held by the majority.Another response to the recent events could be that the violent clashes of worldview will never end until a decisive break between religion and politics is made.After all, up until now, Israel has lived from crisis to crisis. In August 2009, this column addressed another nasty spike of tensions, sparked by demonstrations against parking lots operating on the Sabbath in Jerusalem. Riots over allowing traffic on Shabbat on streets that run through Haredi areas were common in the previous decade. In Israeli cultural lore, the classic Ephraim Kishon film “The Policeman” has a famous scene that is tragicomically close to the present: a group of Haredim protest a car driving on the Sabbath and they are fully prepared to overrun the good policeman. In the film, Officer Azulai charmingly wins them over. That was back in 1971. In reality – then as now – no one is winning.In 2009, The Jerusalem Report asked a strongly worded question outlining a plan for near-total separation of religion and state to see if respondents believed that institutional, political change is the appropriate response. We described a level of separation beyond even some Western liberal democracies, on the theory that maybe in our heated society any contact between democracy and the divine is just too explosive to risk.This time, we decided to engage in a tracking exercise. Asking the very same question, with almost the same sample design, can lead to results that may indicate if there has been any change in public thinking. Is the cumulative effect of outrage increasing the number of people who support separation of religion and state? Or does the public outrage inevitably settle down like so many other outrages – corporate, bureaucratic, economic, political, conflict-related? The question asked: “Imagine a proposal for a total separation of religion and state in Israel. Israel will remain a Jewish state, but parties will not be allowed to run on a religious agenda; there will be no funding for religious institutions, and marriage, divorce, burial will be under state authority only; religious ceremonies by the Rabbinate will be only by citizens’ choice. Do you support or oppose this proposal?” In the summer of 2009, 500 adult Jewish respondents were quite split: half (49%) supported the proposal and 41%, eight points less, opposed it. Those who supported it broke down evenly between those who greatly or somewhat supported it, but among those opposed, twice as many opposed it intensely as weakly. Three-quarters of secular respondents supported the proposal, but only 36% of traditional (Masorti) – and 52% were opposed. Just 12% and 5% of religious and ultra-Orthodox, respectively, supported the proposal. The youngest respondents (18-35) opposed the separation of religion and state at a higher rate than all others.

What has changed? Two and a half years and at least one crisis-cycle later – the overall Jewish population shows little difference. In the current telephone survey of 500 Jewish adults, 51% supported the separation proposal and 42% rejected it. The similar numbers and nine-point gap, compared to 2009, are well within the margin of error. The intensity levels (those who support or oppose “strongly” or “somewhat”) are all but identical. As in our previous survey, higher-educated and higher-income respondents show absolute majorities who support the separation. 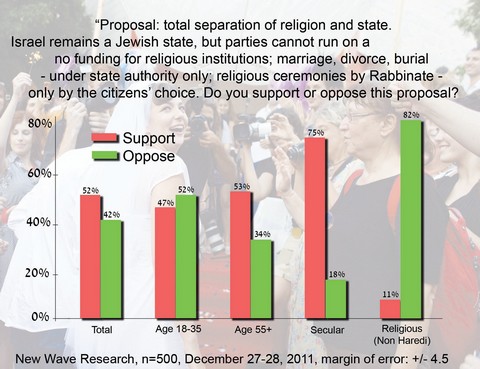 However, looking deeper into the demographics, we see that some groups expressed shifts. In 2009, only 36% of traditional respondents supported the proposal. In the current survey, 43% support it (those who defined themselves as secular and religious remained exactly the same). In the current survey, 20% of Haredi respondents actually supported the proposal – but with their scant representation in a sample of 500, this can’t be taken as a statistical trend. Still, it warrants exploration.Among young people from 18-35, who make up a sufficiently large sample to arrive at conclusions, there is a significant change: from 35% who supported the proposal then to 47% who support it now.One further finding that is just a statistical nuance could be relevant: In 2009, 50% of men and 45% of women supported it, a small gap that is within the margin of error; 40% of women opposed the separation. Today, 52% of women supported the proposal, compared to 51% of men, almost the same. Again, 40% of women opposed. That means the gap between women who support or oppose the proposal has risen to 12 points compared to eight points in 2009. It’s a small increase, but it could be some reflection of the gender hostility expressed of late.Still, why hasn’t there been a larger shift in support for separating the two elements? Rafi Barzilay from Kfar Neter, near Netanya, 43, a strategic political adviser who has moved from the left camp rightward over the years, tells The Report in a telephone interview: “Although I can get very angry about these incidents, and the media hype, it doesn’t influence my basic attitudes.” Barzilay describes himself as secular. “[The incidents] don’t call into question my own personal definition of religion. I won’t say ‘I don’t want to be Jewish,’ because of [them]… regarding the basic tenet of religion and state, which is very fundamental, it doesn’t make me want a change.”When read the question, Barzilay defines himself as moderately opposed – the choice that won the smallest minority of responses, just 13%.But when it comes to religion and state in Israel, it seems that the minority rules.
Advertisement
Subscribe for our daily newsletter