No meeting of minds: Jerusalem and Moscow remain miles apart

Much has been made of Israel’s burgeoning ties with Russia, but Jerusalem and Moscow remain miles apart on Syria, Hezbollah, Iran and the Palestinians 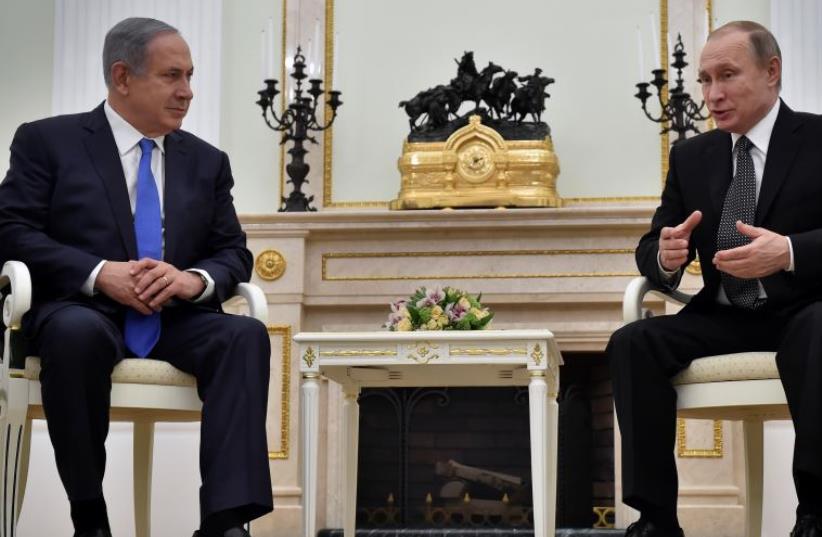 ussian President Vladimir Putin (R) meets with Prime Minister Benjamin Netanyahu at the Kremlin in Moscow, Russia, April 21, 2016
(photo credit: REUTERS)
Advertisement
THE VISIT of Prime Minister Benjamin Netanyahu and his wife Sara to Moscow in early June would hardly have made a ripple, but for the fact that it was the premier’s fourth trip to the Kremlin in less than a year. Even in the case of such avid fans of organized tours abroad, such frequency must have a reason.Officially the visit was dedicated to commemorating the 25th anniversary of the restoration of diplomatic ties between the two countries, after a long hiatus between the Six Day War in 1967 and the emergence of the Russian Federation in 1991 on the ashes of the old Soviet Union.

Of course there were other reasons and other goals – primarily the signing of an agreement to extend the payment of Russian pensions to Russian emigrants living in Israel and a thorough exchange of views on the state of the emerging and troubled Middle East.The close personal ties between Netanyahu and Russian President Vladimir Putin have long been evident and clearly Russia’s recent armed entry into the Syrian theater necessitates frequent consultations between them on tactical military coordination, which in turn provides scope for exchanges on wider strategic assessments.The military coordination is good, as opposed, say, to the many potentially dangerous border incidents between Russian and Turkish forces, and should be welcomed. But on the overarching diplomatic- strategic level, for which the leaders, not the military operatives, are responsible, Netanyahu and Putin are light years apart.Indeed, the Russian “Pravda Online” news outlet described the visit as a Russian foreign policy “slap in the face” for Israel.There is no meeting of minds on Syria, Hezbollah, Iran or the Palestinian issue.Putin continues to believe that Bashar Assad should remain at the head of the Syrian state as a stabilizing influence in the face of ISIS and the local Syrian opposition. Assad is also seen as a staunch Russian ally, helping to promote Moscow’s ongoing economic, political and military interests in the region. Moreover, from Putin’s point of view, Hezbollah and Iran are part of a key pro-Russian axis, with a potential for destabilization of Middle Eastern gas and oil markets.Netanyahu’s desperate efforts to appear as one of Russia’s best friends in the region and his unrealistic plans for partitioning Syria and gaining international recognition for Israeli sovereignty over the Golan Heights evoke only snickers of derision in the Kremlin.Moreover, Israeli rejectionism on the Palestinian track – using the shopworn argument that there is no peace partner on the other side – causes the same unease in Moscow as it does in Western capitals.So why did this failed visit nevertheless receive public attention? Despite their differences in virtually every sphere, this was a meeting of two internationally isolated leaders who comforted each other with their common hatred of US President Barack Obama, Germany’s Angela Merkel, Britain’s David Cameron and France’s Francois Hollande – the leaders of the free world who are sick and tired of the dissembler from Balfour Street and disgusted by the con artist in the Kremlin.Putin still believes that the Jews run the world in general and the US in particular – and that ties with Netanyahu – especially in the run-up to the US presidential election – are a safe investment even if from time to time he needs to hold his nose.Their mutual hatred for Obama engendered a small practical step: Netanyahu invited the giant Russian Gazprom company to help search for gas and oil in Israel – which, if it comes off, could enable the sale of gas and oil directly to Europe rather than via Turkey.The spirit of freedom and candid politics, which Obama instituted in his eight years in the White House and which Merkel is also trying to introduce in a fragmented Europe, tends to make more autocratic and manipulative leaders like Putin and Netanyahu seem out of step in Western capitals.The ostentatious nature of the visit – the almost imperial pomposity which included a 25th anniversary gala concert at the Bolshoi Theater – cannot hide the international isolation of two problematic leaders – whose place among the leaders of the free world is currently in doubt. Dr. Roman Bronfman, a former Knesset member, is an expert on Russia and co-author with journalist Lily Galili of ‘The Million that Changed the Middle East: Immigrants from the former USSR’.