Survey: Israelis worry most about threats internally and from the north

The National Security Index shows how Israelis feel about major challenges to the country each year. 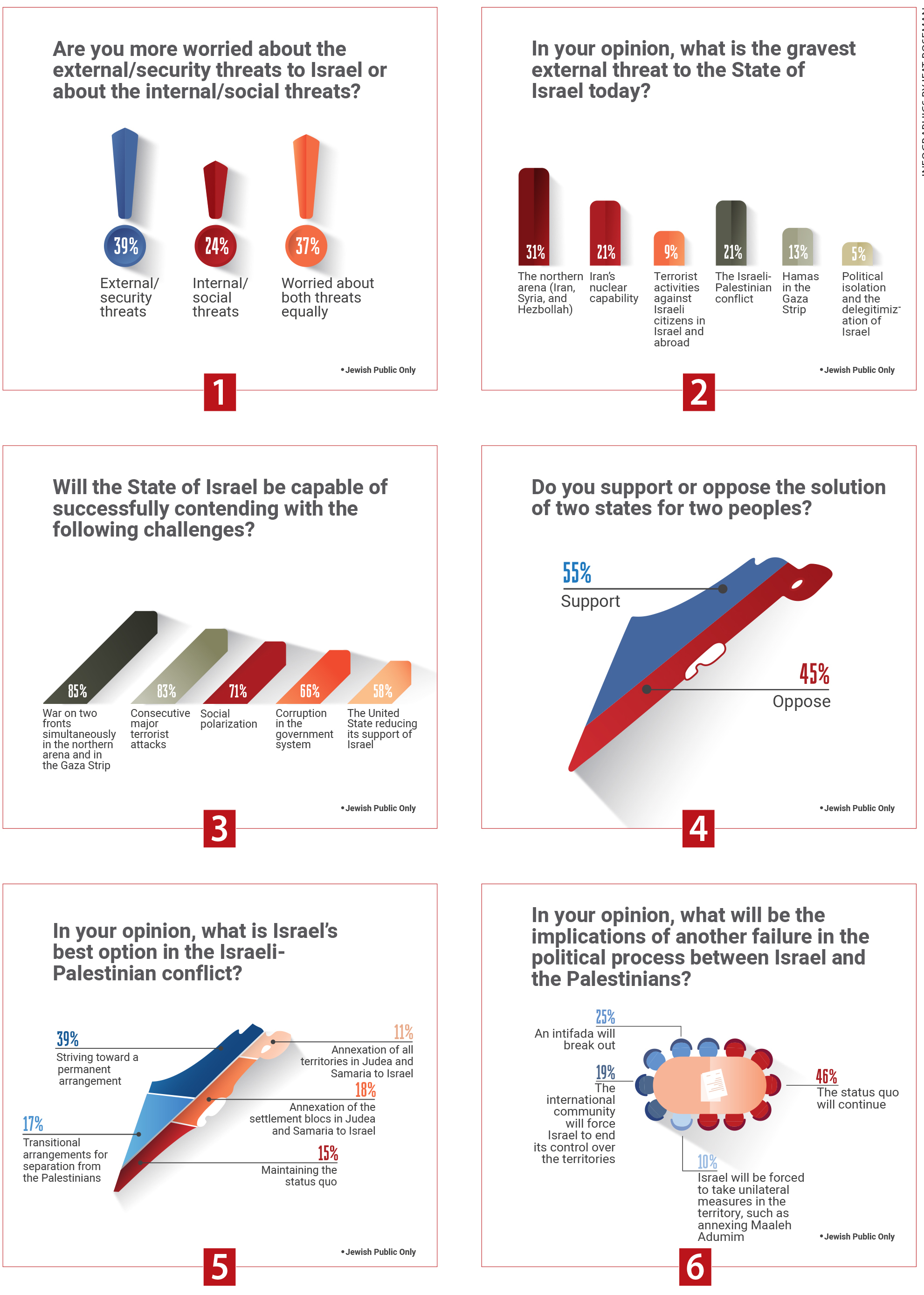 INFOGRAPHICS BY YIFAT ROSEMAN
The Israeli-Palestinian conflict: The public wants an agreement and opposes the status quo (Graph 4) Support for the two-state solution remains relatively high: 55 percent of the public support it. This is a slight decrease compared to the findings of the last two years: in 20152016, 59 percent of the public favored the two-state solution. Support for the two-state solution was consistently high and stable from 2003 until 2013, both during crises and at times of security calm, regardless of the leanings of the government (above 70 percent). Even if there has been a decrease in recent years, support for the solution remains high − despite the political deadlock, tensions related to various aspects in the internal Israeli arena, the fact that the state is ruled by a distinctly right wing government, and the deterioration of the security situation since 2015.Graph 5 A clearer picture emerged from a related question. Respondents were asked what, in their opinion, is the best option for Israel in the Israeli-Palestinian conflict in the immediate future. It seems that most of the public (56 percent) desire a settlement, whether a “permanent settlement” (39 percent) or “interim agreements leading to separation from the Palestinians” (17 percent). Only 11 percent express the desire to annex all of Judea and Samaria or the settlement blocs (18 percent), and only 15 percent support maintaining the status quo. A further specific question discovered that a large part of the public think that the status quo is bad for the country: 56 percent feel this way, compared to 43 percent who think that the status quo is in Israel’s interest.Graph 6 Although the majority of the public want a solution based on an arrangement, a large part think that, in practice, the status quo will persist. Responses to the question “What will be the ramifications of another failure in the political process between Israel and the Palestinians?” reveal that 46 percent of the public think that the status quo will continue, 35 percent think an intifada will break out, 19 percent think that the international community will force Israel to end the occupation, and 10 percent think Israel will be forced to take unilateral steps, such as the annexation of Ma’aleh Adumim. It appears that the public understands that a policy of passiveness is detrimental to Israel in the long term. It would therefore seem that when it comes to the perception whether or not time is on Israel’s side, most of the public feel that time is not on Israel’s side and believe that the passive policy Israel pursues and the political deadlock are harmful in the long run. In other words, the public senses the problematic nature of a bi-national state and expresses worry about this becoming a reality. It would therefore seem that the Israeli public still wants separation from the Palestinians one way or another. If the Israeli government reaches some agreement with the Palestinians, the agreement would presumably win an even higher percentage of support.Dr. Zipi Israeli is the head of the National Security Index project at INSS.  The National Security Index’s findings will be presented in detail at the INSS annual conference ‘Strategic Assessment for Israel,’ to be held on January 29-31, 2018