When will reality dawn? Neither separation nor annexation is viable in the West Bank

Neither Left nor Right lives in the real world. 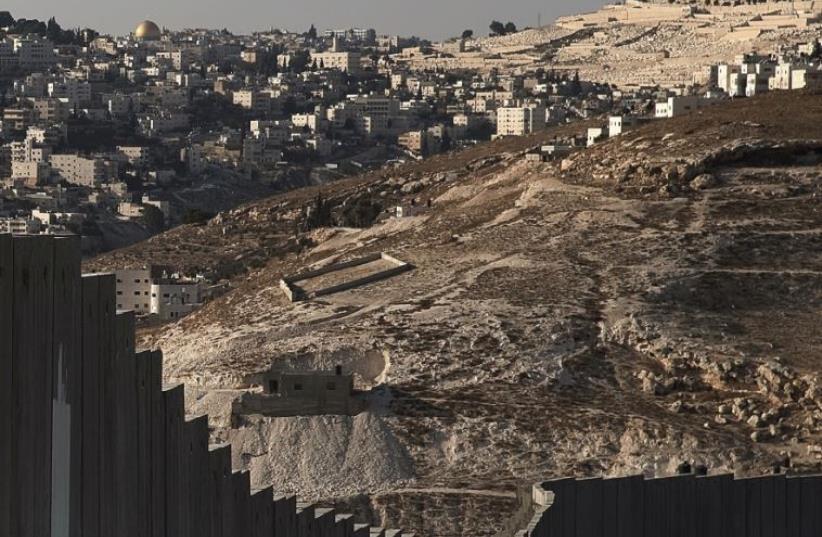 The Israeli security barrier between Jerusalem’s Old City, seen in the distance, and the Palestinian town of Abu Dis
(photo credit: REUTERS)
Advertisement
What can and should Israel do about the West Bank? The wave of lone-wolf kitchen- knife terrorism that began last October may be abating somewhat, but debate over the West Bank has heated up again.Two opposing proposals are on the table.One calls for increased Israeli presence and control (annexation), supported by the political right. Another calls for unilateral Israeli withdrawal (separation), especially from east Jerusalem, supported by the political Left.

Close examination reveals that neither plan is viable. Neither Left nor Right lives in the real world.Before explaining why, I want to set the stage. Most Israelis alive today were born after the Six Day War in 1967 and do not recall a time when Israel did not control the West Bank. Here are some basic facts and history that are unfamiliar to many.The West Bank comprises some 5,640 square kilometers (2,177 square miles), or roughly one-quarter the area of pre-1967 Israel, and, according to the CIA’s “World Factbook,” has a population of about three million Palestinians and 371,000 Israeli settlers. However, experts tell me there are more likely between 2.5 and 2.7 million Palestinians, and around 320,000 settlers (based on adding up the population of individual settlements). East Jerusalem has about 200,000 Palestinians.What is now known as the West Bank was part of the Ottoman Empire for 400 years, from 1517 until the empire dissolved in 1917 and the League of Nations gave Britain a mandate over what is now Israel and the West Bank.The 1947 United Nations partition plan proposed creating from British mandate territory, a Palestinian state, part of which was the West Bank, and a Jewish state. The neighboring Arab states rejected this plan, leading to Israel’s declaration of independence in 1948 and the resulting war. The 1949 Armistice Agreement that ended the war defined Israel’s borders with Jordan, Lebanon, Syria and Egypt – what are now known as the pre-1967 borders.Jordan occupied the West Bank in 1948 and, in 1950, annexed and ruled it, until 1967. This annexation by Jordan was recognized by Britain and Pakistan, but not by the international community.The Foreign Ministry claims that since the status of the West Bank was not defined in 1967, Israel is not subject to the international law of occupation, which specifies rules for administering land captured from an “established and recognized sovereign country.” The International Court of Justice at The Hague has rejected this claim, and international law continues to regard Israel as an occupying power with all the obligations this entails.In 1988, Jordan cut its administrative and legal ties with the West Bank and stripped West Bank residents of Jordanian citizenship.Actually, Jordan ceased representing West Bank Palestinians as early as 1985, in the wake of an agreement between Jordan’s King Hussein and PLO chief Yasser Arafat.In 1993, the Oslo Accords signed by Israel and the Palestinians created the Palestinian Authority. Under this peace agreement, the PA fully controls and runs Area A, about 11 percent of the West Bank land, jointly runs Area B with Israel, comprising 28 percent of the West Bank, and ceded full control of Area C to Israel, about 61 percent of the West Bank.The West Bank economy generates per capita GDP of some $4,000, measured at exchange rates that reflect true purchasing power. This is about one-tenth the level in Israel.The PA’s budget deficit in proportion to GDP, 16 percent, is among the highest in the world. This means the PA, which has an annual deficit of more than $1 billion, is crucially dependent on aid and gifts from other countries to pay its bills.This is why the PA is continually on the brink of collapse. A decline in the flow of aid means the PA becomes unable to pay the salaries of legions of its workers. This weakness is, in fact, its main strength ‒ the PA’s constant refrain is “send us money or we will disintegrate, and the picture will not be pretty.”The debate over what to do with the West Bank and the Israeli settlements there has generated enormous heat but very little light. To better understand the issues, I spoke with an old friend, Colonel (Res.) Moshe Elad of the Galilee Institute’s Center of Middle East Studies.Elad’s PhD dissertation was on the Israeli- Palestinian conflict, and has just been published as a book, “If You Wish It, It Is the West Bank” (a play on Theodor Herzl’s phrase “im tirzu, ain zo agada” ‒ if you will it, it is no dream). Elad served in the IDF for nearly three decades, mostly in the West Bank and Lebanon, and continues to serve in the reserves.As coordinator with the PA, he played a key role in implementing the 1993 Israeli- Palestinian peace accord. He launched Israeli-Palestinian joint patrols in Hebron, Ramallah, Nablus and other West Bank districts, and during the first intifada, served as military governor of the Bethlehem and Jenin districts. His Arabic is fluent. He came to understand the West Bank the hard way, through the soles of his feet.