As I mingled my way around the community, the ridiculous stereotypes dissolved, revealing compelling insights on the Jews of Stockholm.

By MOLLY GELLERT
MAY 14, 2013 05:04
Great Synagogue of Stockholm 370
(photo credit: Molly Gellert)
Advertisement
I knew nothing of Swedish Jews. Would they be taller? Blonder? Serve Swedish meatballs for the holidays? As I mingled my way around the community for a weekend visit, these ridiculous stereotypes dissolved, revealing compelling insights on the Jews of Stockholm. When traveling abroad, there are a few tell-tale signs of a synagogue. Plastic curlicue communications to a guy’s ear as he peers under the body of a passing car, is one of them. And so, I approached him with passport in hand. He examined its pages carefully while asking El Al-esque security questions: “And what is the name of your Rabbi in New York?”“Rabbi Joshua Davidson.”“And how did you hear of this synagogue?”“I Googled ‘Jewish community Stockholm.'”And with this he smiled, handed me my passport and opened the gate of the Great Synagogue of Stockholm.Inside the gate I walked slowly past a wall with the names of more than 6,000 Holocaust victims related to Swedish Jews. I received, however, a bit of comic relief upon entering the synagogue. Just outside the main prayer hall was a sign with little white plastic letters outlining the days and times of services. While I don’t know my days of the week in Swedish, I did notice that the letters “S”, “H” and “T” were missing from the word SHABBAT: Services on, “ABBA” would begin at 9:15. This didn’t help defuse my stereotypes as even a synagogue in Sweden could be touched by its legendary pop group. 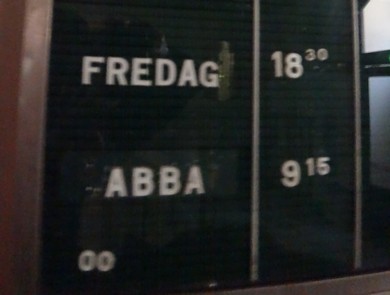