By LAHAV HARKOV
MARCH 29, 2012 15:22
weekly schmooze 311
(photo credit: Courtesy)
Advertisement
How do you say Shaq in Hebrew? Well, you just say "Shaq." But the NBA legend can say "Baruch Hashem," "Leshana Tova" and "Mazel Tov," and also lift Jon Stewart in the air. Stewart joked that his son wants to play professional basketball, but it's unlikely because he's Jewish. Shaq told the fake-news host to tell his son that "Uncle Shaq" says he can make it.Now, for someone who presumably knows a few more words in Hebrew, we have everyone's favorite Jewish rapper Drake. The artist formerly known as Wheelchair Jimmy is filming a music video for his song "HYFR (Hell Yeah F***ing Right)" that recreates his Bar Mitzva. Rather than going back to his hometown of Toronto, though, he brought fellow rappers Lil' Wayne and DJ Khaled to a synagogue in Miami. Here's a shot of Drake rapping from the bima: 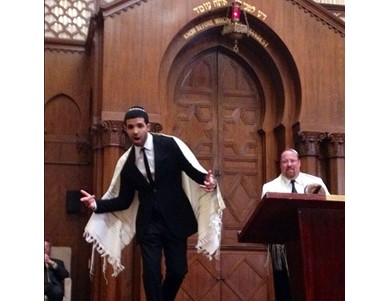 Drake rapping at the Speaking of Jewish coming-of-age ceremonies, Big Bang Theory star Mayim Bialik visited the National Museum of American Jewish History in Philadelphia to celebrate the 90th anniversary of the Bat Mitzvah. Bialik described her own Bat Mitzvah day, when her photo was on the front page of The Los Angeles Times arts section, because she was playing the young Bette Middler in Beaches.Comedian Rachel Bloom has a very specific demographic: 12-year-old boys in Hebrew School. Bloom has released a Sarah Silverman-esque song and music video called "You can touch my boobies\Sex as understood by adolescent boys," portraying a kid falling asleep during a Hebrew School lesson and fantasizing about his teacher. "Some may say it's a comment on gender roles and sexuality as portrayed by the media," Bloom blogged. "Most will probably say 'booooooooooobs!'"<As Pessah approaches, the time has come to savor every last morsel of leavened bread before you're forced to chop on matza for seven days (eight, if you're outside of Israel). In honor of the upcoming holiday Forward has ranked the top ten Jewish sandwiches in America. Many are made of deli meat, but there is also falafel, schnitzel and cream cheese with lox.The Weekly Schmooze collects the hottest Jewish culture news from around the world. Ranging from celebrities to philanthropy to quirky communities, we're here to schmooze about Jews. If you have any news to share with The Weekly Schmooze, write to: weeklyschmooze@gmail.com