Iranian leader sends greeting on Twitter while Obama pays a visit to a synagogue in Sweden.

By JTA, JPOST.COM STAFF
SEPTEMBER 5, 2013 00:02
US President Obama in Stockholm's Great Synagogue370
(photo credit: REUTERS)
Advertisement
As Rosh Hashana, the Jewish New Year began on Wednesday both the US President Barack Obama and the Iranian President Hassan Rouhani wished Jews around the world a Happy New Year.A Twitter account believed to operate with the authorization of Iranian President Hassan Rouhani wished Jews worldwide a Shana Tova. Meanwhile, in Sweden President Obama examined artifacts from the life of Raoul Wallenberg and wished Jews worldwide a “shanah tovah” during a tour of Stockholm’s Great Synagogue.

Rouhani's New Year's Wishes“As the sun is about to set here in #Tehran I wish all Jews, especially Iranian Jews, a blessed Rosh Hashana,” the tweet posted Wednesday said.Mohammad Reza Sadeq, an adviser to Rouhani, denied that the Twitter account belonged to the Iranian president, telling the Fars News Agency that "any official news on him (the president) is released by the presidential office.”However, CNN quoted a close aide to Rouhani as saying that, while the president himself did not send out the tweet, staff members in his office run the account, and therefore it is semi-official.Rouhani was elected this year as a relative moderate ostensibly willing to make Iran’s nuclear program more transparent, but resisting calls by Western states and Israel to reduce Iran’s uranium enrichment. 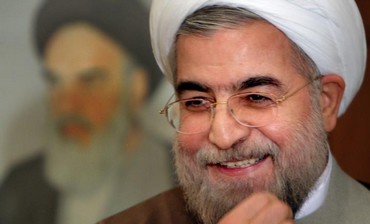 He had during the election decried his predecessor Mahmoud Ahmadinejad’s broadsides against Jews as “hate rhetoric.”Iranian Jews now number less than 10,000, although the ancient community was at one time the largest in the Middle East.The tweet was accompanied by a 2011 photo of an Iranian Jew praying at Tehran Synagogue.

Obama's New Year's wishes US President Barack Obama visited the Stockholm synagogue on Wednesday, where he examined the belongings of the Swedish diplomat who saved thousands of Hungarian Jews during the Holocaust and later disappeared into Soviet custody.At a Holocaust memorial outside the synagogue, Obama delivered a short Rosh Hashana greeting.“To all our Jewish friends here in Sweden, in the United States and around the world — especially in Israel — I want to wish you and your families a sweet and happy new year,” he said. “L’shana tova.”Obama met with Swedish leaders and toured presentations of the country’s innovations in environmentally friendly technologies on a stopover before he headed to St. Petersburg for a G20 industrial nations summit.The White House on Wednesday also released Obama’s video message for the Jewish New Year. The message recalled a speech delivered 50 years ago by Rabbi Joachim Prinz at the Lincoln Memorial, just prior to the Rev. Martin Luther King Jr.’s historic speech at the March on Washington.“Representing the thousands of Jews there that day, [Prinz] told the marchers, ‘When God created man, he created him as everybody’s neighbor. Neighbor is not a geographic term. It is a moral concept,’ ” Obama said.“As the High Holidays begin, it’s a chance not just to celebrate with friends and family, but to ask some of life’s most piercing questions: Am I treating strangers with kindness? Am I living not just for myself but for others? Am I doing my part to repair the world?”Obama also recalled his visit to Israel earlier this year to “renew the unbreakable bond between our two countries.”
Advertisement
Subscribe for our daily newsletter