What does Jewish law say about uterine transplants?

While uterine transplants might be able to overcome legal obstacles, it remains critical to carefully consider its ethical and societal implications.

Over the past decade, doctors around the world have successfully transplanted one woman’s uterus into another woman. The recipient was then able to be impregnated via in-vitro fertilization and bring her baby to term. In some cases, the donor woman died, and her uterus was successfully procured from her body. In other cases, living donors were used. Sometimes these were post-menopausal women giving their uteruses to their daughter, whose similar genetic composition makes a successful implantation more likely. In other cases, the donors were women undergoing hysterectomies for other reasons. In all cases, the intent was for the recipient to only proceed with one or two pregnancies. The donated uterus will then be removed so that the woman will no longer need to take immunosuppressive drugs.

This medical technique still requires further development. Yet, it bears the promise of giving a woman with an absent or failed uterus the opportunity to have the emotional and physical experiences of pregnancy, while offering an alternative to adoption or gestational carrier surrogacy. It is critical to evaluate the moral and legal implications of such a procedure. We’ll offer a tentative analysis based on some initial rabbinic literature on this topic.

In certain respects, uterine transplants raise less ethical issues, since there is no ambiguity created regarding the legal mother of the child. The transplanted organ clearly takes on the identity of the new body and, in any case, no genetic material was contributed by the donor.

Interestingly, the first halachic discussion about uterine transplants took place in the early twentieth century. As Dr. Edward Reichman has documented, many rabbinic treatises were penned in response to an alleged but ultimately fantastical case of an ovarian transplant. While many of the writers expressed incredulity at the reports, they raised many of the core issues regarding transplantation of reproductive organs at that time. 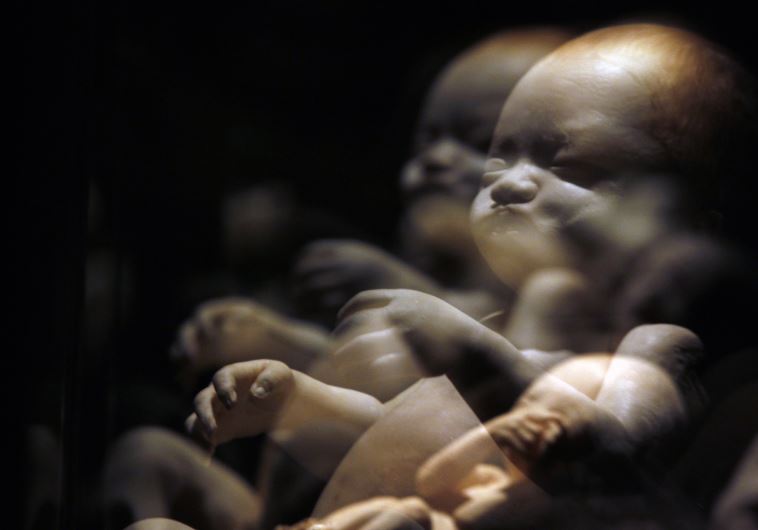 A plastinated fetus is seen during the exhibition ''Body Worlds'' by Gunther von Hagen in Rome (credit: REUTERS)

Some ethicists wonder whether it is justified for the (live) donor and recipient to undergo risky procedures. The recipient, for example, will need to undergo the initial transplant, IVF implantation, caesarean delivery and then a hysterectomy at a later stage. These are life enhancing but not life saving surgeries.

OTHERS, HOWEVER, retort that in the Bible, we find no less of a figure than Rachel who, while suffering from infertility, screams out to her husband Jacob, “Give me children, or I shall die” (Genesis 30:1). The ability to bear one’s own children is deemed a sufficiently worthy cause to allow some level of risk, particularly in controlled medical environments.

Many decisors, furthermore, believe that fertility ailments are sufficiently grave to permit some therapies that might include lower-level prohibitions. Even if these therapies are not lifesaving procedures, they are being performed for a praiseworthy cause.

While this might justify a recipient undergoing the procedure, some decisors have questioned whether a live donor can perform such an operation on herself. Jewish law restricts human autonomy over our bodies and generally prohibits causing physical harm to oneself. Yet, medieval authorities like Maimonides limited this prohibition to cases of aggressive self-inflicted wounds - controlled procedures done for the sake of a great need or helping others, however, would not be prohibited. Of course, one would need to ensure that the risk level of the procedure is not excessive and that the donor gave informed consent to the procedure.

A potentially more significant obstacle is the prohibition against sirus (sterilization). Jews are prohibited from removing their reproductive organs or harming their fertility, unless necessary for therapeutic reasons. This problem might be obviated if the donor may need to undergo a hysterectomy anyway for other health reasons (as in the case of a prolapsed uterus or while undergoing a prophylactic oophorectomy to prevent ovarian cancer). Additionally, the entire prohibition of sirus may not apply in cases when the donor is already infertile, as in the case of post-menopausal women.

When it comes to procuring a uterus from a posthumous donor, there are of course no concerns regarding battery, sterilization or unnecessary risks. Nonetheless, there remains a general prohibition of desecrating a human corpse or benefitting from a body. As opposed to posthumous donation of hearts or lungs, a uterus is not pikuah nefesh (saving a life) that would necessarily override those prohibitions.

Many have argued that a controlled, careful process of removing the uterus does not desecrate the body, for example, removing a cornea is not considered defilement of a body. The recipient might be benefiting from the corpse’s body; but, in this case, it is for the sake of therapy and helping to fulfil the great mitzvah of procreation. As such, the prohibition of illicit benefit may be overridden in this case by other considerations.

Given the novelty of the procedure, however, it remains critical the donor or their family understand that their donation will include the uterus. As always, consent remains a critical part of new procedures, even as it is by no means the only consideration.

While uterine transplants might then be able to overcome legal obstacles, it remains critical to carefully consider its ethical and societal implications. As with many emerging technologies, one can imagine positive and negative ways in which it may be utilized. One hopes that our society will have the right moral compass in utilizing this technique for the greater good.

The writer is the executive director of the Halachic Organ Donor Society and is the author of A Guide to the Complex: Contemporary Halakhic Debates.