It is not difficult to imagine the depths of Moses’s disappointment, frustration and torment. 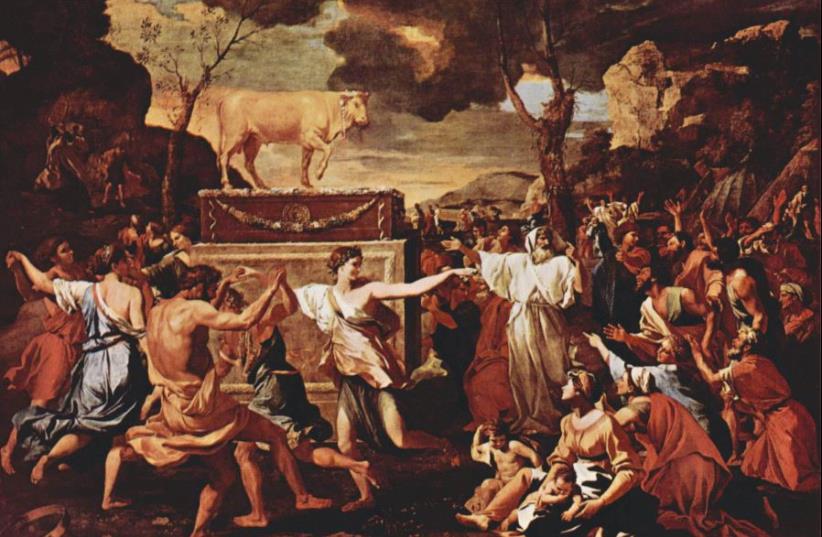 'The adoration of the Golden Calf’ by Nicolas Poussin
(photo credit: WIKIPEDIA)
Advertisement
The main story in this week’s Torah portion, Ki Tisa, is one of the most embarrassing ones at the beginning of the Jewish nation’s history: the sin of the golden calf. It happened when Moses went up to Mount Sinai and stayed for 40 days in order to receive the Divine directives written in the Torah. The nation waited for him at the foot of the mountain, but days went by and Moses did not return. There were people – according to tradition, they were the “erev rav,” non-Jews who attached themselves to the Jewish nation in the Exodus from Egypt, who had not let go of the idolatrous Egyptian culture and wanted to create a substitute: a god in the form of a calf.
These people turned to one of the respected people in the nation, Chur – the son of Miriam the prophetess, who refused to cooperate with them and paid for this with his life. Immediately afterward, these same people turned to Aaron, Moses’s brother, and demanded of him, “Come on! Make us gods!” Aaron, apprehensive of more bloodshed, preferred to cooperate with them. He tried to postpone the creation of the calf under different pretexts, but the pressure from the nation was ultimately decisive. With surprising generosity, they donated the gold jewelery they had brought from Egypt, and melted it to create the golden calf.
The calf was made, and Moses descended from Mount Sinai and was faced with the shocking sight of the nation dancing around the golden calf, ecstatically calling out, “These are your gods, O Israel, who have brought you up from the land of Egypt!”
It is not difficult to imagine the depths of Moses’s disappointment, frustration and torment. During that past year, Moses had courageously faced Pharaoh, the Egyptian king, and demanded that he free the Hebrew nation of slaves and allow them to leave Egypt. With the help of manifest miracles and the 10 plagues that God brought down on Egypt, Moses succeeded in his mission and liberated the nation. He led them through the sea, arriving at Mount Sinai, where they experienced a public Divine revelation, the only one in history, in which they heard the Ten Commandments. And now, it seemed, the nation had gone back to its ways, to Egyptian idol worship, to dancing around a golden calf.
Moses began a series of actions. First, he broke the Tablets of the Covenant that he had brought down from Mount Sinai, understanding that a nation that worships a golden calf could conceivably also make the tablets into a sort of idol. After that, he burned the calf and punished those who had initiated the sin. Then Moses turned to God to plea that He not punish the nation for their sin. During the prayer, a fascinating dialogue took place between Moses and God; one which its significance has been analyzed by commentators and philosophers for generations. We will take a peek at the writings of the giant of Jewish thought, Maimonides, who dedicated a long chapter to this in his monumental book “A Guide to the Perplexed.”
Moses asked two requests of God. The first: “…let me know Your ways, so that I may know You - so that I may find favor in Your eyes” (Exodus 33, 13); and the second: “Show me, now, Your glory!” (ibid ibid, 18). Maimonides explains that Moses wanted to know the ways in which God leads the world, and in addition, he wanted to grasp godliness itself. God refused the second request: A human being, even the greatest human like Moses, is incapable of grasping the essence of God. It is beyond human capability. But God answered the first request in the affirmative:
“I will let all My goodness pass before you…”
(ibid ibid, 19)
What did God teach Moses about His ways of leading the world? He taught him about the virtues of compassion that represent Divine leadership. Here, Maimonides adds significant insight: Why did Moses ask to know the ways of God? Because Moses understood that a human leader must adopt these ways when dealing with the nation. The incredible disappointment brought upon Moses by the nation’s creation of the calf led him to search for the Divine paths a leader should take.
These paths are the 13 attributes of compassion. Just as God is capable of forgiving the sins of humans, so humans are called upon to forgive the sins of others. A worthy leader is one who is guided by compassion. Moses learned this after the sin of the golden calf. It is a lesson we should also learn and internalize. ■
The writer is rabbi of the Western Wall and Holy Sites.