On the moral plane, the Torah taught the world how to see. That remains our responsibility, our struggle and our task. 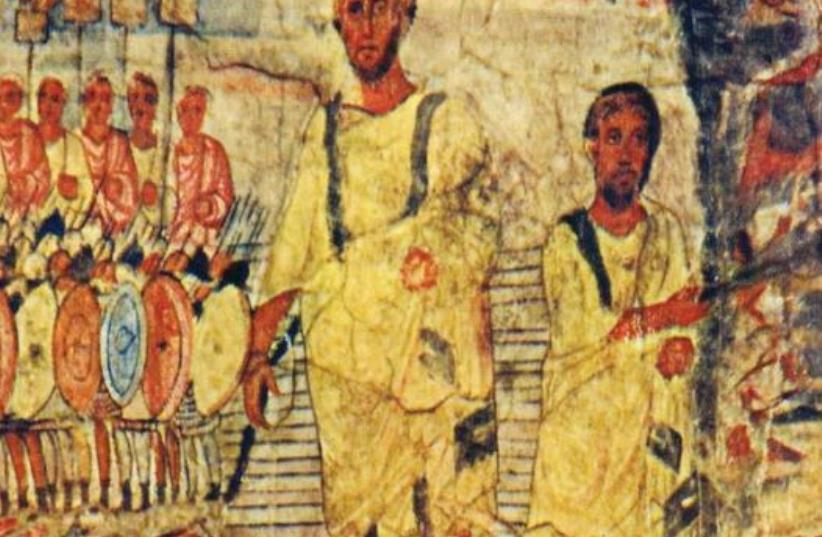 ‘Hand of God in Exodus and the Crossing of the Red Sea,’ wall painting from the Dura-Europas synagogue in Syria
(photo credit: Wikimedia Commons)
Advertisement

We are accustomed to thinking of Genesis as being a book about family and Exodus a book about a people. Yet beginning Exodus by contrasting households in each book offers a different view of the story.

Picture the household of Pharaoh. At the head of the household is a cruel man who imagines himself a god. At the same time he raised a daughter who, in defiance of her father, rescues a Hebrew child from death. And then there is Moses himself, raised in Pharaoh’s household, who identifies nonetheless with his people and develops an enduring sense of justice.

The first lesson from all of this is that your origin need not be your destiny. Pharaoh’s daughter transcended the brutishness of her background. Moses’s sense of decency could not be destroyed by his proximity to power.

Yet we see what happens in such an atmosphere: goodness is driven underground. It must show itself stealthily. The midwives lie about their rescue of Hebrew children (Exodus 1:19). Pharaoh’s daughter does not acknowledge Moses until he is grown (Exodus 2:10). When Moses sees the Egyptian taskmaster beating a Hebrew slave, he looks around to make sure no one is watching, before he takes action. In a home or a society ruled by wickedness, acts of goodness must be acts of cunning as well.

Contrast this to what we have learned in Genesis. When the brothers sell Joseph into slavery, it is their immorality they must hide, not their goodness. Here the family dynamic has been flipped on its head: where the home is good, bad acts must be hidden. Where it is bad, the good takes refuge in the shadows.

What is true in a home is true on a larger canvas as well, but with a twist. For just as good acts must be hidden in a wicked society, cruel acts become invisible. Wickedness need not be hidden, since it forms the background of everything. When the tendency of the society is to evil, citizens can barely distinguish the unkind act.

In Germany, after the rise of the Nazis and before the mass deportations, gradual humiliations and degradations of Jews became commonplace. The average German barely noticed them. Their occurrence was normalized, and people tend not to see what is normal, only what is different.

Now we can understand the plagues in a very different light. One of the enduring questions of the Exodus is – why didn’t God simply take the Israelites out of Egypt? What was the reason for the sound-and-light show, the plagues with all their attendant drama?

Part of the aim of the plagues was to make overt that which had been hidden. Had the Israelites simply disappeared, there would have been economic disruption but no moral reckoning. The slavery had become invisible to the Egyptians since no one thought it was wrong. In order to come to terms with what one has done, it must first be seen.

The Torah’s impact on the world was to make the wickedness visible. Its insistence on the plight of the widow and the orphan was intended to force us to notice those who were forgotten and unseen. Acts that had been taken for granted were suddenly cast in a bright light. The Torah tells us again and again that we must not turn away.

Leonardo da Vinci once said that his aim in life was to learn how to see. On the moral plane, the Torah taught the world how to see. That remains our responsibility, our struggle and our task.