We can learn two powerful lessons about the human psyche by understanding the calf as a symbol and not as an embodied god.

By DAVID WOLPE
‘WHILE THE Golden Calf surprised Moses, Herzl was ready to confront it.’
(photo credit: Wikimedia Commons)
Advertisement

The golden calf is one of the great mysteries of the Torah. How could a people, having so recently seen the majesty and power of God, revert to the idol worship of Egypt? Was Egypt not decisively defeated?

First, it is important to remember, as Ramban makes clear, they did not worship the calf itself: “For no one could be so stupid as to think that the gold in their ears brought them out of Egypt.” (Ramban on Exodus 32:4)

We can learn two powerful lessons about the human psyche by understanding the calf as a symbol and not as an embodied god.

The Israelites first fled a culture of the visual. When we think of ancient Egypt we imagine the pyramids, the sphinxes – even the realm beyond this world was rendered visible, with mummification and a literal City of the Dead, in Cairo. Sculptors made statues for inclusion in tombs because they were substitute bodies for the souls. Things were rendered tangible.

Now, Israel must adjust to the idea that the greatest reality is one you cannot see. Even invisible forces like wind were represented in pagan civilizations by tangible symbols. How could you have such a powerful god without a physical representation? It went against everything they had known and so the calf was a substitute for the representation of God that has disappeared (Moses). 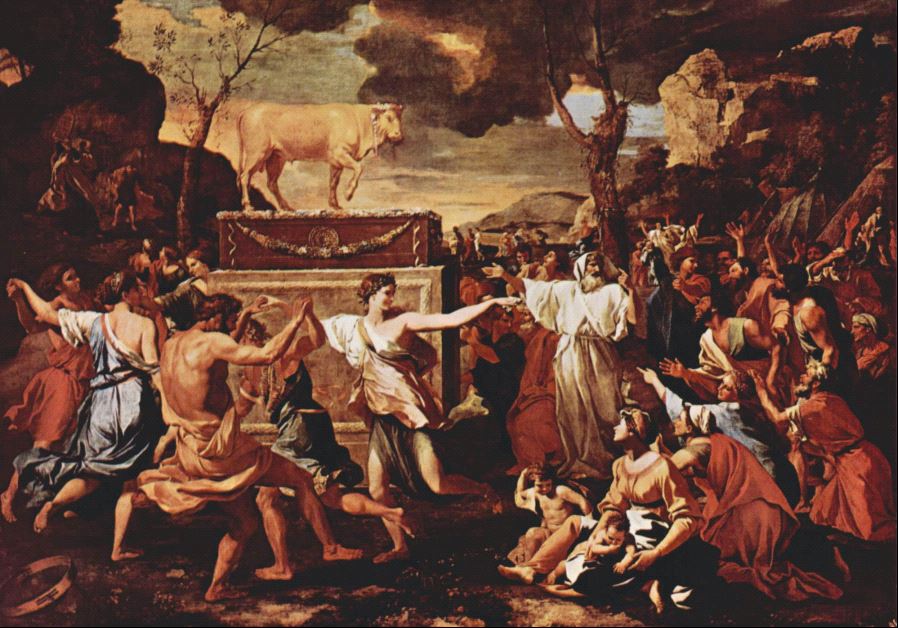 'The adoration of the Golden Calf’ by Nicolas Poussin (credit: WIKIPEDIA)

Remember, the Torah says, “When the people saw that Moses was so long coming down from the mountain, they gathered around Aaron…” (Exodus 32:1) Before Moses went up the mountain, they had a symbol of God in God’s servant. Now, he was gone. If it seems far-fetched that a person could be a substitute for god, then I remind you that the Israelites speak of god in the plural, which the Bechor Shor commentator says could mean they are referring both to the calf and to Aaron.

The craving for something tangible, so evident in other religious systems, makes its appearance here as the Israelites grapple with the disappearance of the one who they thought represented God. But that is not the only psychological phenomenon on display here.

The nation from which Israel emerged is called mitzrayim and is associated with the word tzar (narrow). Our first impulse is to consider that which is narrow as confining. But it can also be safe. A straitjacket might seem uncomfortable but its restraints also keep the person from harming themselves or others. A tight hug feels safer than a pat on the back. To be unmoored is to feel uneasy.

The Israelites went from a tight space to the most open place in the world – the desert. What could be more precarious and insecure feeling than the sandy expanse with no buffers against the world?

Finally underlying everything is fear. The former slaves are feeling what psychiatrist Erich Fromm termed Escape from Freedom. We assume we wish to escape to freedom, but there is a terror in not have order and structure, in the lone, level sands that give only choice. As all sorts of modern studies have demonstrated, too much choice does not create happiness, it creates dizziness. There is a vertigo of possibility.

That solid, tangible piece of gold was intended to be an anchor in a scary time. However, the people of Israel were in the wilderness and needed to live with the Torah as the map and God the guide. Idols are cheap comfort and will not hold up as a pillar at the center of our lives.

Along the way to Israel, Israel must grow. ■

The writer is Max Webb senior rabbi of Sinai Temple in Los Angeles and author of David: The Divided Heart. On Twitter: @rabbiwolpe