We must look closely: What was the background of this incitement? Why did the king of Egypt incite his nation against the Israelites and why was he so successful?

Parashat Vayigash tells us about Jacob’s children who went down to Egypt to buy food due to the famine in their area. Judah and his brothers beg for mercy from Egypt’s viceroy until he can no longer contain himself and he reveals his identity to them. “I am your brother Joseph, whom you sold into Egypt” (Genesis 45:4). Then Joseph moves his father, brothers and their families to a very fertile area in Egypt, called the Land of Goshen, and he sustains them and provides them with grain.

At the end of the parasha, the Torah details the depth of the crisis in Egypt as a result of the famine. Joseph, who had collected a great amount of grain during the years of plenty that preceded the famine, sold it to the residents of Egypt during the years of famine. The result was that the Egyptians bought the royal grain until they were impoverished and their assets were transferred to the pharaoh, the king of Egypt, leaving them to beg Joseph for bread.

Out of despair, they offered to sell to the king their fields, and themselves as slaves, in return for food. Joseph accepted their offer and bought all their fields. From then on, the residents of Egypt moved into cities and worked their fields for the pharaoh, who took ownership of the land.

It seems that to answer this question, we must skip to the beginning of the Book of Exodus, the second of the five books of the Torah. At the beginning of Exodus, we hear of a new pharaoh ruling over Egypt who did not know Joseph. This pharaoh incites his nation against the Israelites, who have since become a huge family. This incitement works and the Egyptians make the Children of Israel their slaves, torturing them and killing their sons. Now we must look at this closely: What was the background of this incitement? Why did the king of Egypt incite his nation against the Israelites and why was he so successful? 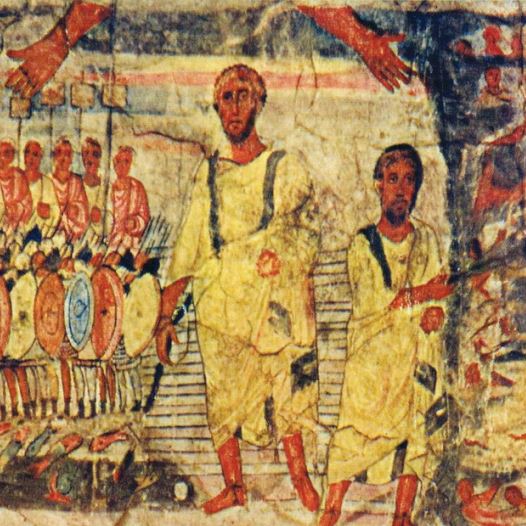 ‘Hand of God in Exodus and the Crossing of the Red Sea,’ wall painting from the Dura-Europas synagogue in Syria (credit: Wikimedia Commons)

The answer to this is in the detailed description that concludes Parashat Vayigash. Divine will made it that the geopolitical situation that Joseph created in Egypt during the years of famine was the key to the incitement against his family years later. A situation was created in which most of the residents of Egypt lived in crowded cities, enslaved to the king, forced to pay him a fifth of their yield, which they worked hard to grow. However, the pharaoh had tremendous wealth, which he accumulated primarily during those seven years of famine when he sold grain to the Egyptians in return for their assets.

Over time, this invariably led to great unrest and bitterness among the residents of Egypt. The pharaoh, afraid of being overthrown, found a simple solution: He incited the Egyptians against the Children of Israel – the only ones who had fields and were not enslaved to him. Thus, the pharaoh hoped to kill two birds with one stone – to take the Children of Israel’s wealth and to direct the Egyptians’ rage in the Israelites’ direction.

This phenomenon is not unique in the annals of history. More than 80 years ago, Adolf Hitler used the same method. Though the verses appearing in this week’s Torah portion give us the background to the incitement against the Children of Israel, and their enslavement and murder, we can learn lessons from this story for our times as well.

In this generation of social media, it is very easy to incite against individuals, sectors and political groups. This incitement frequently succeeds in making us turn our feelings of anger and frustration toward a particular person, sector or movement. This is the easy way to escape daily challenges – to find a guilty party. When we read about the way the king of Egypt behaved, we learn to sharpen our senses and pay attention: What is the goal of those who are inciting? Are they trying to help us or are they playing with our feelings for their own benefit?

Instead of inciting, we must take responsibility. Instead of resentment, we must grow and create change.

The writer is the rabbi of the Western Wall and Holy Sites.