What do Jews believe about the afterlife?

Less than half of American Jews believe there is a heaven or a hell; not all that surprising, since that half also does not believe in a higher power or spiritual force of any kind.

By STEWART WEISS
Sun penetrating the clouds above the mountains near Chengdu, China. "It looks like Genesis to me," says Tomer
(photo credit: TOMER ZADOK)
Advertisement

It was the great Joseph Burg (1909-1999), onetime religious affairs minister, who coined the phrase, “Midvar seker tirchak,” stay away from surveys – a play on words of the Torah commandment, Midvar sheker tirchak – stay away from falsehood. But a rather interesting survey recently appeared that caught my interest and bears examining.

The Pew Research Center reports that a majority of adults in America – 73% of those surveyed – say they believe in heaven. At the same time, a majority (62%) say they also believe in hell. While a quarter say they don’t believe in either heaven or hell, only one in six Americans don’t believe in any kind of afterlife. Religion, obviously, plays a major part in what one does or does not believe and so, not unsurprisingly, only 3% of atheists believe there is a world after this one, as opposed to 96% of evangelicals who are sure they are moving on.

And as for us Jews? Less than half of American Jews believe there is a heaven or a hell; not all that surprising, since that half also does not believe in a higher power or spiritual force of any kind (Orthodox Jews, you might have guessed, are a complete exception; a full 93% of them feel certain that the God of the bible is a definite reality). If it’s any consolation, you’ll be happy to learn that while God and heaven did not rank all that high, 8 in 10 Jews do say that they like to eat or cook traditional Jewish foods (though not necessarily keep kosher).

So I thought a few words were in order about Jewish tradition’s view of heaven. First off, with the exception of some kabbalistic texts, there is virtually no mention or description whatsoever of heaven in the Tanach (Bible). There are, however, some rather obvious hints. We are told, for example, that Jacob was “gathered to his people” when he died. This infers that he was reunited with his ancestors in another place, echoing the Zohar’s statement that when we die, all our loved ones will come to greet and escort us. We are also told (Malachi 3:23) that Elijah the Prophet will return one day to announce the coming of the Messiah; where, exactly, would he return from if there was no heaven?

The Talmud is somewhat more explicit about an afterlife. The Mishna in Sanhedrin assures us that “all Israel has a share in Olam Haba, the world to come.” (This, by the way, does not mean that heaven is reserved exclusively for Jews; all people who follow the basic laws of civility and morality will gain entrance, as well.) And Ethics of the Fathers (4:21) reminds us that “this world is but an entrance way leading to the next world; prepare yourself here so that you may enter the banquet hall.” 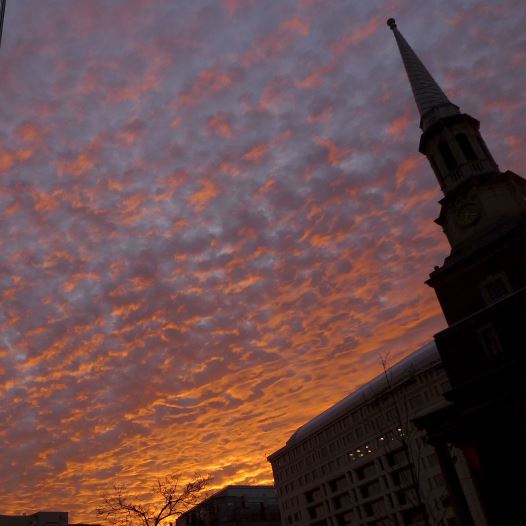 Early morning clouds are reflected in a window at sunrise across the New York Avenue Presbyterian Church steeple in Washington January 6, 2012. (credit: REUTERS)

Essentially, the rabbis propose that there are four phases of existence. The first is Olam Hazeh (this world), where we are now. It is essentially finite, lasting no longer than 120 years – although the possibility of reincarnation, primarily to “complete” our life’s mission that was left unfinished is also an authentic Jewish idea.

The second phase is Olam Haba, or Gan Eden (heaven or paradise). This may be a spiritual paradise where we experience an overwhelming closeness to God or, in some opinions, a kind of “holding zone” for our souls, awaiting an eventual reordering of the universe.

The next phase is Y’mot Hamashiach, the age of the Messiah. This will happen in the natural world, when humanity will undergo a radical change for the better. Poverty, war and violence will end, prosperity will abound, the entire Jewish People will return to Israel and knowledge of God “will flow like a river” over all the Earth. Traditionally, this era of redemption will center on one mortal human being, but others believe it is an overall process that begins with our establishing sovereignty over our own land.

The last phase is T’chiyat Hameitim, the resurrection of the dead. Though this is virtually impossible to comprehend and questions abound (Will we come back in our bodies? At what age? If we were married more than once, with whom will we be reunited?), Maimonides says that a believing Jew must accept this tenet with full faith. And the prophet Ezekiel vividly foretells, in the Vision of the Dry Bones, that God “will open your graves, lift you out of them, and return you to Israel.” The Book of Daniel confirms: “Many of those that sleep in the dust of the earth will awake, some to eternal life, others to reproach… and the sages will be radiant like the bright expanse of sky, and those who lead the many to righteousness will be like the stars forever and ever.”

The rabbis suggest that little is said about Heaven for two main reasons. First, exactly what will happen there is incomprehensible to us in our mortal state; it is like a language that we do not understand. Secondly, we should avoid focusing on what awaits us at the end of (our) days and rather concentrate on the work we have to do in this world. “Do not be like a servant who serves his master only for the sake of a reward,” we are taught, we should act out of an intrinsic sense of kindness, love and compassion – in imitation of God – without having an agenda or ulterior motive.

Nevertheless, the knowledge that there will someday be a “balancing of the scales” in either this or a future world, that justice must ultimately prevail, helps us to maintain our faith in God and spurs us on to confront the severe challenges that this world presents. Heaven, then, is the place where everything makes sense and all our questions and conflicts are resolved. That is why it is also referred to as Olam Haemet, the World of Truth.

One dramatic story sums this up: Rabbi Yosef, the son of the great sage Rabbi Yehoshua ben Levi, had a near-death experience – he died, but came back to life. His father asked him: “What did you see there?” Yosef replied: “I beheld a world which is the reverse of this one; those who are on top here, were below there, and vice versa.” His father said to him: “My son, you have seen the corrected world.”

Our task, it seems, is to use all our strengths and capabilities to reach our potential in this world – to do our share to simulate “heaven on earth.” The Redemption will come, but we should not underestimate our ability to speed its arrival. We have been blessed with that power, if only we choose to employ it.

Meanwhile, until we arrive at that higher Garden of Eden, the rabbis reveal that there are three things which are may’ayn Olam Haba, a glimpse or taste of that glorious world to come: Shabbat, a sunny day and the love between husband and wife. So, weather permitting, take a walk in the sun with your loved one on Shabbat. It’s pure heaven. 

The writer is director of the Jewish Outreach Center of Ra’anana. [email protected]