If Tel Aviv's beach is once again to become the common ground for all of the city’s residents, it must succeed in rearranging the permeability between city and nature.

By ITAI PALTI
DO NOT REUSE!!!! Mayslits Kassif’s promenade renovation plan
(photo credit: Courtesy)
Advertisement
Mier Dizengoff, the first mayor of Tel Aviv, famously once said that the city’s beachfront need not be designed for public use, because Jews had no interest in bathing. Today, the new renovation of Tel Aviv’s beach promenade is encountering resistance and harsh criticism even before its first phase has opened. It isn’t the first, or most dramatic alteration to the city’s most valued public space, but it is happening at a time when the public is finding ways to exert greater influence.All relationships between city and nature are characterized by their level of permeability. Ancient city walls represented that separation as a dichotomy of self and other. The structures that had previously demarcated cultures became irrelevant, as nations formed and cities opened to the outside world. What was once considered external to the city became public land, as republics and democracies eventually introduced the notion of collective property.The relationship of Tel Aviv to its beach began when the city, originally founded inland, reached the Mediterranean shores. At that point, the debate of how to distinguish self and other, or city and nature, began to take its course. Dizengoff, in his conviction of the public’s disinterest in beach activity believed that industry should benefit from the shore. In the proposed gesture of extending the city’s urban fabric up to the water, he determined to perpetuate a binary state of city and nature.Thankfully, Dizengoff’s idea never came to fruition. The beach in its early years left in its natural state (pre-promenade) became the fertile ground that arguably contributed to forming Tel Aviv’s pluralistic and liberal identity. As the city’s only significant refuge, the stretch of sand, in the 1920s, was the common ground for locals from all walks of life regardless of social status.Significantly, it transformed into the unwitting symbol of the normalization of Jewish existence, a Zionist ideal. The city on the beach, by contrast to the East European ghetto, helped expand the realm of the people beyond that of an impermeable community. In absorbing the multiplicity of the city, a city of immigrants, the beach represented the democratization of an emerging society. 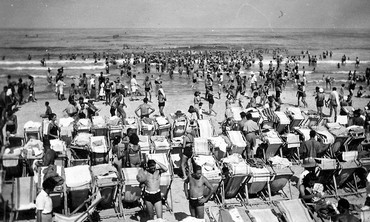 The beach as a democratizing force in the early 20th Century (Tom Beazley - Wikicommons)In the same years that the beach became the gate to city, its popularity began to decline. During the 1920s the municipality neglected the beachfront, even as residents littered without inhibition. The White City’s sands quickly transformed from a source of city pride to a disgrace. In the late 1930s, one of a few different plans was put into motion and the first Tel Aviv beach promenade emerged. In its essence, the action of building a promenade embodied the official regulation of beach activities. One could walk and sit on the elevated platform – surveying the beach, or one could bathe and sit on the sand.Perhaps perpetuated by the dismal state of the beach, such a statement of separation was conceived. The line between city and nature was drawn out as a permanent boundary. Almost overnight, a walk along the beach transformed from traversing between the built and the natural to a patrol of the city walls. Later reincarnations of the promenade perpetuated the binary option of concrete or sand as the overarching architectural quality. 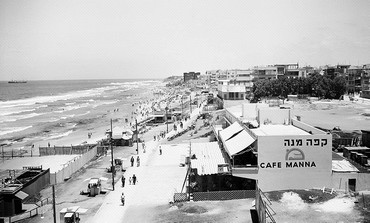 A time when the city and beach blurred into one another, before the first promenade, 1938 (Rudi Weissenstein)In the 1940s, the city municipality began pumping sewage into the sea, rendering it unfit for bathing. The stretch of land that started out as the catalyst for democratization, was later subjected to threats by political partisanship, and eventually paralyzed by an undemocratic exploitation of public property. In turn, the city’s residents abandoned the promenade for new recreational centers inland.The beach continued to suffer from mismanagement and the city turned its back to the sea. Only in the 1980s, when the Dan region installed a sewage treatment facility did the beach begin to recover. Tombolo breakwaters were placed which expanded the area of sand out into the sea. These two acts constituted a statement of reclamation, the expansion of the public realm beyond the city walls. The beaches were cleansed and the waters eventually became fit for bathing. Residents flocked beyond the promenade once again to nature, as a refuge from the intense urban experience that the city had become. 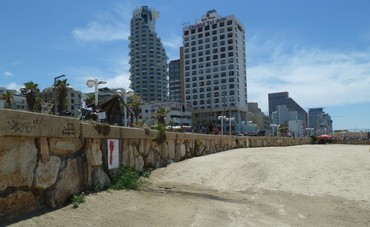 The promenade as a city wall, defining a binary quality of concrete or sand (Courtesy)Today once again, the beach is subject to a democratic process represented on two fronts that are ironically at odds; the public action surrounding the work, and the architectural intent of the architects. Work on the first section of Mayslits Kassif’s promenade renovation plan is nearing completion. The second phase is being postponed by a District Court order, following a public objection by a group claiming the project is environmentally and financially irresponsible. Judge Michal Agmon Gonen has ordered a public consultation and an environmental assessment that allegedly should have been carried out in the planning phase of the project.The Facebook group “Saving Tel Aviv Beach”, and the related activity on the social network are the driving forces behind the scrutiny surrounding the project. It should be seen in the larger context of the democratization of the public sphere, promoting accountability for actions that affect wider society. Israelis have taken enthusiastically to such activity, and it has brought about historic shifts such as the social justice protests of 2011.There have also, however been cases of irrational mobbish behavior spurred by erroneous online information. Last month, a photo of a woman using her mobile phone was uploaded to Facebook falsely claiming that she ignored the nationwide memorial sirens. The photo became viral and the woman suffered abusive comments and threats as a consequence. A visit to the online petition of the group “Saving Tel Aviv Beach” uncovers emotive hyperbole such as “in a few years there will be no beach left at all”; a counterproductive statement in the context of rational debate. The objectors do however raise a number of valid points. Amongst the objections, is that the plan extends beyond the currently built area without having been subject to the relevant approval process and an environmental report. At a costly NIS 150 million, the group claims that the municipality funds are better spent on improving deprived neighborhoods. The objections raised have in turn been addressed with varying success by most major parties involved in the project. Mayslits Kassif claim that following an in-depth analysis during the design process, it became apparent that there was an opportunity to put to greater use the seldom frequented space alongside the current promenade wall. Commentators are responding that the little used part of the sand constituted a ‘buffer’ zone, or was integral to the view of the beach from the promenade above. The details are numerous and do require debate, but the effect is incontestable: what in the past would have been in the hands of a select few has evidently become a more egalitarian process.Alongside the public debate, a separate process is aiming to implant a democratic quality to the promenade. From the project’s inception, the architects were confronted by territory layered with compromises. In the three most recent decades, the sand and the sea have gradually been reclaimed back into the public realm. The promenade stands as a relic corresponding to a dated city wall, from a time when misuse and pollution rendered the beach an external territory. The challenge faced is to bring together city and nature, and correct the currently binary architectural quality of the existing structure.Mayslits Kassif have instated a variety of optional interactions with the beach. One can walk the upper promenade and survey the view, sit or lie on the large steps, walk along the sand on the lower promenade, or occupy the sand. In a coastal city that up until now had no free attractive spot to enjoy the beach without sand, the option is long overdue. Without addressing the particularly wide dimensions of the lower promenade (which bears numerous objections), it does allow for parents with prams and disabled people to enjoy significant proximity to the sand for the first time. In diversifying the experience between concrete and sand, the architects have addressed the multiplicity of the beach’s prospective users. 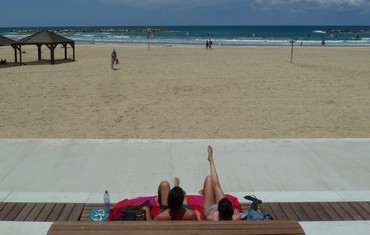 A section of the new promenade (Courtesy)In the wider historical context of the beach, the latest architectural intervention, and the social action involved mark a peak of democratic intentions. The process of architectural projects in the public realm will need to adapt in order to consider the citizens’ demand for greater influence. With that influence, a mature rational voice must be adopted to ensure fair democratic accountability. The architects’ execution of their role is yet to be judged, though the reaction of the public to the opening of the first section hints at success. The measure of the project’s effect will ultimately lie not only in the change to the number of people using the beach, but also in their variety. If the beach is once again to become the common ground for all of the city’s residents, it must succeed in rearranging the permeability between city and nature, and the disparity between self and other. Through the augmentation of the beach’s inclusive qualities, Tel Aviv stands to strengthen a symbol that epitomizes its character as a pluralistic, democratic city.