The stakes are high for Tel Aviv's Ganei Sarona project, not only for its aspired commercial success and its responsibility in preserving a heritage site; Sarona is a new district being born into a into a competitive city.

By ITAI PALTI
SEPTEMBER 23, 2013 10:44
A render showing a renovated Sarona, surrounding development
(photo credit: VIEW POINT)
Advertisement
The Ganei Sarona project is expected to open at the end of the summer. The 140-year-old ex-Templer colony within Tel Aviv is being brought back into the public sphere through an extensive renovation process surrounded by huge development. In Italo Calvino’s Invisible Cities, Marco Polo the explorer attempts to describe a city named Zora. From his knowledge prior to visiting, he depicts a city of order and stability. However, he states, “in vain I set out to visit the city: forced to remain motionless and always the same, in order to be more easily remembered, Zora has languished, disintegrated, disappeared. The earth has forgotten her.”The story of Zora is a warning to all historical cities, it is a reminder of the importance of renewal to a city’s existence. Now that Tel Aviv is transforming into a patchwork of heritage sites, the discourse as to how we preserve is taking shape and Sarona is one of the largest singular statements to date.The complete narrative of the Sarona Templer Colony, founded in 1871, remains largely outside of the public’s consciousness. The simplified narrative tells of an insular community of German settlers who with varying success managed to work the land and survive in a time when the region had little comfort to offer.Some of the agricultural techniques brought over and developed in the Templer colonies were adopted by Jewish settlers in latter years, including pioneering the use of Eucalyptus trees to dry up mosquito infested swamps. 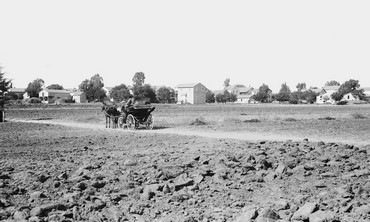 Sarona as an agricultural village (Wikicommons)Reincarnations of Sarona were products of wider European and local movements. Its population and endeavors being partly funded by Germany brought about deportation by the British and souring relations with local Jews. Eventually the colony was abandoned and taken over by the new state, the old buildings being used as the first offices of many of Israel’s national institutions and government.In the 1970’s, a plan to demolish Sarona and redevelop its prime real estate was successfully thwarted by preservationists who argued for its historical value. The Tel Aviv Municipality reopened discussions on Sarona’s fate in the 1990’s at which time The Society for Preservation of Israel Heritage Sites headed by Tamar Tuchler began its struggle for saving the Templer colony. These actions were part of a wider process over the last three decades that Tel Aviv has undergone, gradually finding in itself architectural and urban qualities worth preserving. The city’s previous self-image manifested itself all too evidently in the lack of upkeep and appreciation of what is now viewed as an indispensable cultural asset.Tel Aviv was relatively free of the preoccupation of most historical cities trying to cope with the responsibility of safekeeping a built heritage. Today however, there are many examples of buildings or neighborhoods that are protected by stringent laws and a special preservation planning department of the City Council. It is in these specific points in the city that the tension between preservation and development plays out.There are examples of creative solutions to this tension, for example along Tel Aviv’s Rothschild boulevard where skyscrapers hover over some of the city’s first buildings. However, a number of different questions are raised when the subject for preservation is more multifarious than a single standing structure. In Sarona especially because of its historic identity as a separate entity to Tel Aviv, the act of preservation doesn’t limit itself to a building and it’s materials, but to a neighborhood and its spirit.Sarona’s built heritage as a Templer farming community has become its raison d'être. It is the rural aspect of its identity that not only differentiates it from the surrounding urban fabric, but repels it by virtue of its self contained historic value. The preservation of Sarona’s spirit is dependent on its contrast to the city. On these grounds especially, the balance of conservation and regeneration is critical to its success.The Sarona project cannot be judged solely on the preservation of the Templer structures, but also on the highrises that will encircle it. On Sarona’s South side, a huge residential and retail development is near completion and it is planned as an integral part of the "Sarona experience." It will be argued that the juxtaposition of massive development next to a delicate heritage site is insensitive and incongruous to its surroundings. However, it is the contrast that it delivers which will highlight the contrary nature of Sarona’s original spirit to its current urban envelope. 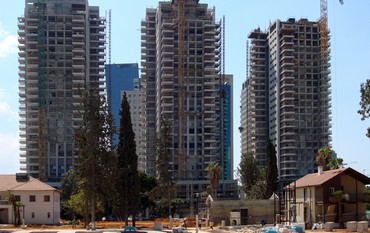 The contrast in scales of old Sarona and its surrounding development (Itai Palti)The disneyfication of historic Sarona, as it is, conserved within limited and controlled boundaries is inevitable. It is the cost of preserving any built environment, the act of extracting the space from the more organic process of urbanization is a form of objectification. If on Rothschild, the historic buildings become akin to perfectly preserved dollhouses next to skyscrapers, Sarona will likely become a theme park in the romanticised image of its original form.The ill fate of the Italo Calvino’s city Zora represents the peril of over-preserving a built environment. Yet Sarona with its emphasis on conservation is still at its core an act of change, and concurrently an acknowledgment that not all must be sacrificed at its altar.The virtues and faults of the new Sarona can be judged within this framework, one that looks beyond the inevitable consequences of any similar act of preservation. These are the creative boundaries that the designers faced, challenged to balance the needs of the public, along with commercial prospects against the honest restoration of buildings, landscape, and spirit.Identity The song “Heimat” by Carl Kuebler, a Templer who lived in Sarona, emphasized the rural nature of the village. It begins: "On Saron’s green fields / Lays a small friendly village / Golden oranges, fruit orchards /Flower gardens invite one in." Therein lies the discord between the act of recreating an historically private and insular world, and at once connecting and exposing it to a modern bustling city and its inhabitants.Landscape architects Zur Wolf accepted this complexity and pursued a greater representation of the rural identity of Sarona. To concentrate the qualities of an agricultural village that had once spread over a far larger area they inserted new groves, fields, and structures between the lots of houses where they wouldn’t have originally existed. These ‘symbolic’ elements are strategically placed as part of the site’s interconnectedness so as to experience them through discovery rather than a forced linearity.Ora Hacham Rafael and Lior Wolf also point out that some of the rural textures that they had intended to incorporate into the design were later abandoned for more ‘useful’ public assets such as open grass areas for picnics. Some gardens of the preserved houses, arguably a major element in the community's heritage had to be partially paved over for the commercial use of cafe and restaurant seating. 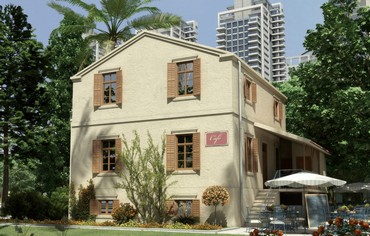 Rendering of preserved Templer house transformed into cafe (VIEW POINT)
It remains to be seen how much of old Sarona has really been sacrificed to meet commercial goals. Yet there are exceptions which give the new neighborhood another dimension and a greater variety of life; the Technion will open a new small campus, there will be museums and art galleries, and a range of organized public activities. Over time, changes of use will likely occur and if the management is dynamic Sarona could strike a healthy equilibrium.Connectivity Even before it is opened there is already reason for praise, namely that the new-old streets of Sarona will be publicly owned and therefore a new major asset to the city. This stands in contrast to the Old Train station complex located between Neve Tzedek and Jaffa which has succeeded as a destination, but as yet failed to integrate itself into the city’s urban fabric.The location of Sarona places it between some of the city’s major future developments (Gindi TLV, the new towers around Azrieli), and in proximity to Ibn Gvirol, Carlebach and Dizengoff. The loose grid of streets that has largely stayed faithful to the original village plan by Theodor Sandel, and the wide open spaces will likely make Sarona a favored route between its surrounding focal points.Sarona is naturally well connected to Kaplan Street. Though an opportunity is being partially lost on the site’s corner reaching Menachem Begin, where a bridging staircase is dwarfed by a set of impervious terraces forming Sarona’s facade to the street. A greater emphasis on the staircase could have made a better contribution to Menachem Begin, improving the city’s continuity in an especially strategic point across the road from Yehudit Boulevard (arguably Tel Aviv’s most frustratingly isolated boulevard). 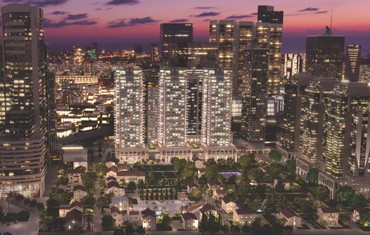 Sarona and surrounding towers (VIEW POINT)The towers which will eventually surround Sarona, and their planning will dictate the ultimate accessibility of the city’s latest historical attraction. Since the restored village will be surrounded on three of its four sides, future developments play a greater role in that sense than Sarona village itself. The role of connectivity should not be considered for its primary purpose only, it is also the driver of change. It is an acceptance of adaptability as part of being integrated into the city’s organic ebb and flow.Balance There is a duality to the lesson of Zora, the languished city. If Zora’s demise was rooted in its enthusiasm for preservation, we can also assume that its previous existence had been worth preserving. Though Zora now exists only in memory, it would not be so had it not developed an identity to remember. Zora’s imbalance meant that it only truly existed with varying presence between its birth as a city of continual change and its static extinction.Ultimately what will determine the longevity of Sarona is not only its integration into the city’s urban fabric.Sarona will need to carefully balance its identity as a destination and experience, with its effectiveness as a thoroughfare and ability to adapt. Only then will it become a living space, adopting the city’s role as a backdrop for infinite unpredictable occurrences, the type one experiences so often on the lively streets of Tel Aviv, or any vibrant city.Itai Palti is a British/Israeli architect currently living in Tel Aviv, Israel.
www.itaipalti.com
www.facebook.com/itaipalti.studio
Advertisement
Subscribe for our daily newsletter