Photography doesn't stop after you press the shutter button.

By TOM LANGFORD
Photography darkroom 370
(photo credit: Thinkstock/Imagebank)
Advertisement
Tom Langford is a commercial photographer, professional retoucher, and a website designer.In1994 Apple introduced the first digital camera for the consumer, the Quicktake 100. It could store 8 very small pictures (640 x 480 pixels) in its internal memory that could be downloaded into an Apple computer using a serial cable. Amateur photographers were now able to view their pictures for the first time on a computer screen.Before the digital revolution, enthusiasts had to put in some serious work if they wanted to view even one of their pictures at a reasonable size. They had to use a chemical darkroom, know how to use an enlarger and have the skills to make a print using "multigrade" photographic paper. It took time, effort and expense to make even one black and white picture. Making color prints was an even more complex and expensive affair that was rarely attempted.During the first few years of digital photography the skills we used in the chemical darkroom were transferred to the computer and the term "digital darkroom" was coined. We started using programs, such as Photoshop, to improve our pictures in the computer. It is now commonplace to view our shots on a computer screen and most enthusiasts don’t bother to improve their pictures. Younger generations have never seen a chemical darkroom and so even the term "digital darkroom" has no real meaning for them - the skills of crafting an image in the darkroom are largely forgotten: Convenience has conquered and photography is the poorer for it.The digital darkroomMy motto is: ”If a picture is worth showing, it's worth improving”. Let's look at a picture that has been presented straight out of the camera and see how it can be improved in the computer. This shot was sent in by Daniel Landesman of Boston, MA.  He is a newcomer to photography and this is his favorite picture. 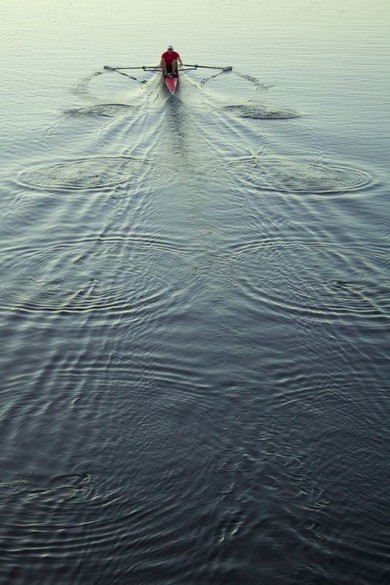 He writes that the "constant dipping of the paddles into the water created beautiful, symmetrical circles. I imagined a beautiful shot of the racer going off into the horizon with a beautiful triangle of ripples left as his foot prints. I also noticed the water appearing lighter as it got further from me. Hence the background water gradually darkens as from the top of the photo to the bottom."I am very impressed that Daniel first visualized the effect he was after and then composed it so effectively. He also realized the dramatic effect of the rower disappearing into a bright horizon. This an excellent shot and he is already developing the awareness of a professional photographer. The picture is only let down only by its lack of preparation in the computer. It's almost a crime to present an image of this quality just as it came out of the camera. Let's see what can be done to improve it.First we need to attend to the color and contrast. I opened it up in Photoshop and used a Curves Adjustment Layer to remove the greenish cast and brighten up the dull, low-contrast appearance. I then used a second Curves Adjustment Layer to give a perfectly white horizon.I wanted to emphasize the foreground ripples and used a third Curves Adjustment Layer to increase the contrast only in this area: I used the gradient tool in the layer mask to gradually reduce this effect from the foreground to the background. 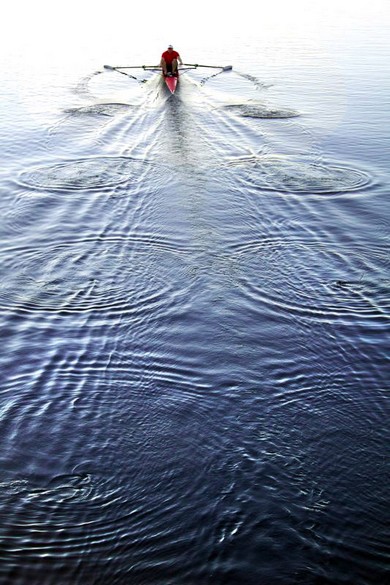 Unless you are very familiar with Photoshop none of this will make sense, but it was much easier and effective to improve this picture in the computer than in the chemical darkroom. There are many online tutorials that will help you understand the simple methods I used. Here is how the layers palette looked for those of you who are interested. 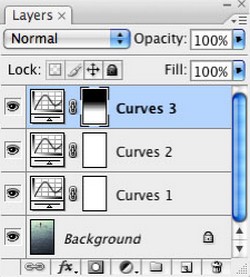 Good pictures don't just happen; they are the product of understanding, experience, effort and talent. I learned my trade in the days of film and then adjusted to digital capture and it's inconceivable for me to show one of my pictures without processing it first in my digital darkroom. Photography does not stop after you press the shutter button.
Constructive FeedbackIf you are aspiring to develop your photography skills, send me a picture and I may use in one in my articles with some constructive feedback.Send one picture only, at a small size to suitable for emails to [email protected].Don’t know how to send a photo by email at a reduced size? See my Brief Guide to Picasa:  www.langford.co.il/courses/PicasaGuide.htmlTom Langford is an Event and Commercial photographer, website designer, and professional retoucher. He teaches photography courses for beginners and improvers. Details of his courses and field trips at: http://www.langford.co.il/courses
Follow @JPost_Lifestyle