By TOM LANGFORD
FEBRUARY 7, 2012 12:56
Donna running
(photo credit: Tom Langford )
Advertisement
Tom Langford is a commercial photographer, professional retoucher, and a website designer.Have you ever been shown holiday snaps of beautiful places and had to be told how breathtaking they were because the pictures made it look boring? With photography it’s possible to make wonderful scenes look ordinary and ordinary scenes look wonderful.Here is a picture that was sent by Stew Feuerstein from New York. He’s an advanced amateur photographer who has been shooting for 40 years. It was taken from a second floor window of the Uffizi Gallery in Florence and shows the Arno River. This is a very picturesque view that has been caught effectively – I’m sure when Stew shows his holiday snaps nobody yawns. 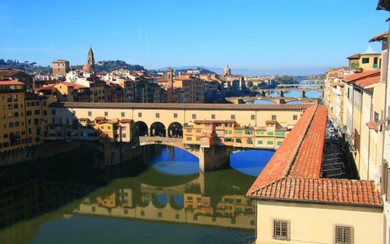 Arno River in Florence (Stew Feuerstein)It’s a carefully composed shot with plenty to interest the eye. I like the way in which Stew thought about the picture before he took it: “Looking out the window I was sure this was going to be a magnificent shot. I particularly like the red tile roof on the right protruding like an elbow into the river, accentuating the segmented (by bridges) multiple lines of perspective (river, buildings) receding to the mid right of the frame," he says. "The blues and greens of the river and sky work well with the rich earth tones (buff, tan, earth yellow, ochre) of the buildings and roofs," he adds."The buildings and mountains in the background give it perspective and dimension with the haze fuzzing out the distant hills. The reflections in the river give it a preternatural feel…..I punched up the saturation (in camera) which made the shot dramatic,” concludes Stew. In my photography courses I always stress that cameras never take pictures: You take pictures with your head, the camera merely records information, and I think we can see this principle at work here. The more you understand what a Good Picture is and the better you can speak articulately about it, the greater the impact that picture will have. My method of critique takes this process one step further. I ask three simple questions: - What works?
- What does not work?
- Could it be improved, and how? Stew has eloquently answered the first question: There is a lot of movement caused by the strong perspective pulling the eye into the picture and into the distance. This is added to by the strong horizontal right to left direction taken by the roofs, and a strong vertical movement caused by the reflection in the water.Your eye is being moved around the picture as I have indicated with the arrows. 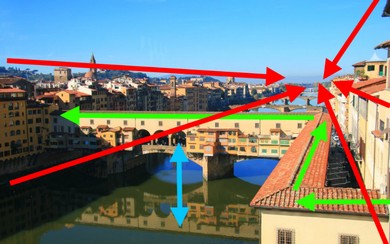 Arno River in Florence (Stew Feuerstein)
It's just as important to understand what doesn't work in a picture too. There are two weak areas that I have indicated with these two white circles: 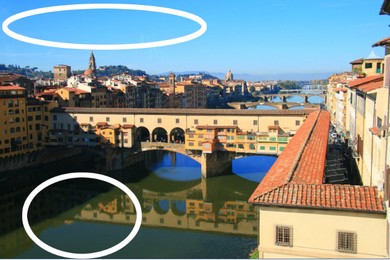 Arno River in Florence (Stew Feuerstein)As your eye is moved around the picture the clear sky allows it to "escape." This can easily be corrected, as we will see in a moment. The other weak area is at the bottom left which is the natural area for a primary focal point to help pull the eye in the opposite direction to the main perspective. We can now answer the third critique question: Can it be improved, and how?
The weakness in the sky is easily corrected by darkening it at the top. This vignette technique has been used by visual artists throughout the centuries to suggest a border directing your attention back into the picture. In the chemical darkroom we used to “burn in” the edges, giving extra exposure to the darken them. With Photoshop I used a curves adjustment layer with a graduated layer mask, see below.The lack of a primary focal point needs to be taken care of as you shoot. After taking the picture and noticing the weak bottom left area I would suggest waiting for an appropriate focal point to appear. Nine times out of ten nothing will happen, but if Stew was very lucky perhaps a couple of birds might fly by just in the right position, or boat would make its way up the river as I have indicated below. 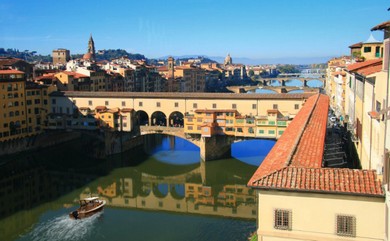 Arno River in Florence (Stew Feuerstein)Stew had used a setting in the camera to increase saturation for a more dramatic effect. It definitely worked but the water seen under the bridge is unnaturally intense. In the final version below I have desaturated this.I have also straightened up the horizontal perspective to give the bridge a more solid, central roll in the shot. This can be achieved with special perspective control lenses but is much more conveniently done using the Warp tool in Photoshop. This correction is not essential to the shot but is my own preference. 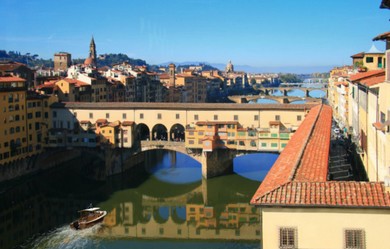 Arno River in Florence (Stew Feuerstein)The more that you understand the essential components of a Good Picture the more aware you become when they are missing. It’s very frustrating when a great shot is marred through lack of a primary focal point that refused to turn up just when it was needed most! I once spotted a wonderful shot in an airport lounge that only needed a group of busy people to walk by and complete it.I waited for at least 40 minutes with my finger gently pressing the shutter button of my camera keeping it pre-focused and ready to shoot. I had to give up when the battery was draining out. Frustrating it may be, but it’s all the more wonderful when you succeed.Send me your picture If you would like to develop your photography skills, send me a picture with details of how you took it. I may share some constructive feedback for selected shots in one of my future articles. Please send one picture only, at a reduced size to jpost@langford.co.il.If you don’t how to send a reduced size photo by email see my Brief Guide to Picasa: www.langford.co.il/courses/PicasaGuide.html Tom Langford is a commercial photographer, website designer, and professional retoucher. He teaches photography courses for beginners and advanced. Details of his next courses and field trips at: http://www.langford.co.il/courses
Advertisement
Subscribe for our daily newsletter