Sunrise from Masada 200
(photo credit: Joe Yudin)
Advertisement
Tom Langford is a commercial photographer, professional retoucher, and a website designer.Last week I gave a few tips about improving a sunset picture; this week we’ll see what can be done with a sunrise.Here is a picture from photography enthusiast Bob Brauser. It’s a rather attractive sunrise taken with his iPhone. As I have mentioned before, you take pictures using your head; cameras are devices that merely record whatever you point them at. Bob’s sunrise is an excellent example that you can create impressive images no matter what equipment you use. 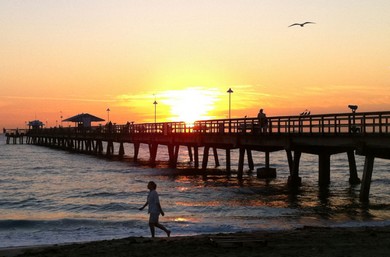 To develop as a photographer it’s important to understand why you like a picture. You have to be able to speak articulately about its strengths and weaknesses and to suggest practical steps that could have taken to improve it during shooting. You progress by having a firm grasp of the basic principles that all Good Pictures share, then by applying them effectively every time you shoot.Basic principlesThe first thing we need to understand is that this is not a picture of a sunrise but of a young person. The primary focal point is not the sun but the figure walking along the shore in a carefree manner. The secondary focal point is the pier thrusting right to left and out to the horizon. The sunrise is merely a background that would be very ordinary if it were not for these two main elements.Our eye is first drawn to the figure, then pulled along in the direction of the pier, then to the sun, then back to the figure, and only then takes in the lesser details. Good photographs take your eye on a journey, they tell a story. Snaps, on the other hand, are taken at a glance and require explanations of what is interesting about them.Once you really understand that good pictures tell a story you will be well on the way to becoming a photographer. This picture tells a charming story, so top marks to Bob and his iPhone.ImprovementsNow that we have spoken articulately about some of the strengths of this picture it’s time to examine its weaknesses and to suggest improvements.In the days of film and chemical darkrooms it took time, skill, effort and expense to make just one print decent enough to show to others. Now we simply download into a computer and can immediately view thousands of images. Using digital technology has not changed the fact that pictures worth showing are worth improving. Bob has done a little basic work, but there's still room for improvement. I would definitely crop it to give a greater sense of breadth. You can do this in the computer, or set your iPhone to a similar ratio in the camera settings. Cropping will loose the bird, which is a pity, but will tell the story in a more concentrated and effective manner. See below: 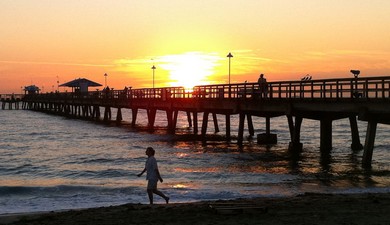 At the time of shooting I would have preferred to take a few steps backwards before I shot, then crop afterward to make a more effective composition showing a little more of the sea. In the version below I have also darkened the sky and increased the contrast slightly. You can do this with a basic editing program. 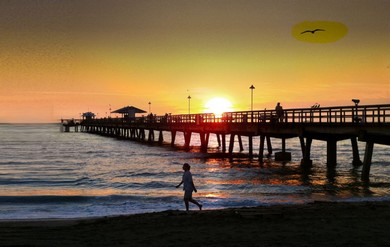 You might notice that I have also increased the saturation of the warm reflections and reshaped the burnt out sun. This requires more advanced software, such as Photoshop; in the past I would have done this with traditional retouching techniques using brushes and photo dyes.You can also prevent the sun from burning out if you download an HDR app for your smartphone camera. High Dynamic Range software retains both highlight and shadow detail but can be used only for static compositions; in this case it would have probably blurred the moving figure, but can be occasionally useful. EffortWhy go to all of this trouble both before and after you shoot?Story-tellers use expressive face, hand and bodily gestures while they tell a story - photographers have to supply all of the clues and information in a static photograph to be sure of telling a moving story. As Bob puts it: “We grab a sliver in time that has a special meaning for the photographer." The simple equation is that others will get out of your photography what you put into it. The process may now be digital but it still takes time, skill and effort if the tale is to be well told. One final touch: My personal preference would have been to take several shots as the figure moved to the left. I would probably have chosen one further from the center of the frame to spread the focal points out a bit more as indicated below. 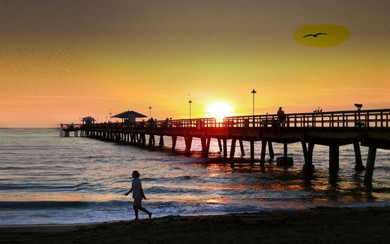 Send me your picture If you would like to develop your photography skills, send me a picture with details of how you took it. I may share some constructive feedback for selected shots in one of my future articles. Please send one picture only, at a reduced size to [email protected]If you don’t how to send a reduced size photo by email see my Brief Guide to Picasa: www.langford.co.il/courses/PicasaGuide.html Tom Langford is a commercial photographer, website designer, and professional retoucher. He teaches photography courses for beginners and advanced. Details of his next courses and field trips at: http://www.langford.co.il/courses
Advertisement
Subscribe for our daily newsletter