The only Jewish, Sabbath observant netsuke carver in history, artist Georges Weil has sculpted the likes of Ben-Gurion and Churchill.

By CARL HOFFMAN
FEBRUARY 19, 2010 18:20
netsuke 311
(photo credit: Courtesy)
Advertisement
To a middle-aged American writer raised on movies, television andBroadway theater, artist Georges Weil comes across as endearinglyEnglish and almost iconically suave, with the urbane mannerisms of filmactor David Niven and the polished voice of stage actor Cyril Richard.He is also erudite, speaking with what seems to have the ring ofacademic expertise in the history of fine art. “My education?” he asks rhetorically. “Grammar school,” he declares,with a puff of his cigarette. “I left school at the age of 16 because Ihad to. We did not have a wealthy household. I went to a Jewish school,and Judaism remains very important to me, on many levels. But my formaleducation stopped at the age of 16. Everything after that isself-taught.”Born in Vienna in 1938, Weil arrived in England with his family oneyear later, on the very eve of World War II, on the last plane fromAntwerp. He grew up in England, mostly in London.Weil briefly attended London’s St. Martins School of Art in 1956. “ButI got kicked out, which was, I think, the best thing that ever happenedto me,” he says. “Art schools – not all, but most – tend to train theirstudents to be put in a kind of box.” Weil believes that his departure from art school allowed him thefreedom to pursue his own interests and develop his own unique styles.Among Weil’s works during this early period were bronze portraitsculptures of David Ben-Gurion and Winston Churchill. He was to returnto this medium again briefly in the 1970s, creating bronze studies ofChurchill, Charles de Gaulle and, last but not least, singer/actorSammy Davis Jr., with whom Weil enjoyed “a friendly relationship ofmany, many years.”But Weil’s artistic pursuits largely had to wait until he could come up with enough money to support them. “I went into the jewelry industry – was actually pushed into theindustry unwillingly – because at that time I wanted to go to artschool instead,” he says. The artistic impulse within him began to force its way out, however, asWeil began to design jewelry, using diamonds and precious stones inmuch the same way as a painter uses colors. He started a company at theage of 17 which, 25 years later, was an acknowledged leader in modernjewelry design. “What was enjoyable about that period was the glamorous side of theindustry, the acquisition of great friends and famous names ascollectors,” he recalls. Among the collectors of Weil’s jewelrycreations were Frank Sinatra, Sammy Davis Jr., Peter Sellers, England’sQueen Elizabeth, and Hollywood’s queen, Elizabeth Taylor. Weil also began to create sculpture made of gold, silver and preciousgems, jewelry as objets d’art, which earned him glowing press reviewsthat compared his work to that of Cellini and Fabergé. One reviewerfrom the Illustrated London News went so far as to declare, “Fabergé objets, exquisite as they are, and superb as their workmanship is, arereally no more than expensive toys – Weil’s pieces are works of art.” Many of Weil’s sculptures in precious metals, like the gold hanukkiathat adorns a corner in his home, depict distinctly Jewish themes.Weil sold his jewelry studio in 1979 to devote more time to art. Heimmigrated to Israel with his family in 1989, leaving behind a famousname and works exhibited in no less a venue than the British Museum.“We were lucky Jews, because we came by choice,” he says. “Things werevery, very good in England. There was no reason to move at all. It wassomething I wanted to do for a long time… Zionism.”Since making aliya, Weil has focused on sculpture and painting. Amonghis major projects was the creation in 1994 of a five-meter bronzesculpture of a man blowing a shofar, installed at the entrance toHerzliya Pituah, near the beach where survivors of the Holocaust landed“illegally” toward the end of the British Mandate, 1945-1948. A similarsculpture, made the following year, was installed at Gilelleje,Denmark, where Danish Jews were spirited safely away in boats to Swedenduring the country’s Nazi occupation.
A VISIT to Weil’s studio provides a glimpse of the diverse array of artstyles, themes and preoccupations that have shaped his painting andsculpture over the past five decades. More or less “simple” oil oncanvas paintings, like one of Ben-Gurion from 1956, evolve before theviewer’s eyes into more complex paintings, sculpture, and then blendsof sculpture and painting as three-dimensional sculptures appear onpainted canvases. Surveying the enormous collection of work, one can deduce severalthemes that appear to have preoccupied the artist at different periods.Judaism is a major motif, with several paintings depicting theHolocaust, and many others representing the tallit, or prayer shawl.Horses are portrayed in colorful – sometimes blue – profile in severalpaintings. Asked, “Why horses,” Weil replies, “I like horses.”  Several frankly erotic studies of the female nude can be seen which,along with most of Weil’s sculptures and paintings of people, areheadless. Asked why these people are headless, Weil replies, “I reallyhave no idea.” Asked about the title of a particular work, Weil replies, “It has notitle. When it needs to have a title, it will have a title. At themoment, it doesn’t need one.” At this point, the viewer has learned to shut up, stop asking questions, and look, really look, at the art work.“I’m not one of those artists who will give you great philosophicalexplanations. I don’t have them. The audience must have them,” Weilsays.The sculptures are made mostly of cardboard, along with everyday thingslike coffee cans and the bottoms of plastic Coca-Cola bottles, allintegrated beyond recognition into the finished work. Many of thepaintings are in fact combinations of painting and sculpture, with thelatter standing out in sharp relief from the painted canvas – usuallyblack and white – to which it is attached. One work in particularcatches the eye, that of a man and woman – headless, as usual –standing beneath a ruined Greek temple with broken columns that issomehow suspended in midair.With the exception of one piece of sculpture – depicting an almostextraterrestrial-looking 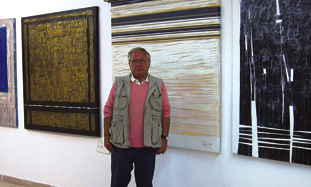 man in a gas mask – commemorating Israel’sexperience of the Gulf War, the art works seem to come from places inWeil’s mind, and not as responses to current events. “I live in my head,” Weil says. “I don’t produce politically motivatedstuff. I’m not a propagandist. I’m in search of an image, all thetime.”                                In addition to Weil’s focus on painting and sculpture, there are alsothe netsuke – tiny, often intricately carved Japanese sculptures ofpeople or animals, around the size of a matchbox. Weil explains, “The Japanese are a genius people, but they neversucceeded in inventing a pocket. They walked around in kimonos and,like everybody else, had to carry things around. They put most thingsin the sleeves of the kimono. The little things, like coins or tobacco,they put in a cloth bag called an inro, secured by a sting to thekimono belt or obi, which was attached at the other end to thenetsuke.”  Invented in the 17th century to serve as a counterweight to the clothbag, netsuke over time became objets d’art, carved into a variety ofminute sculptures, made from materials like wood, bone and ivory. “I collect antique Japanese netsuke. Being a sculptor, I said to myselfat a certain point if they could make them, maybe I can make them.There were no netsuke carving tools here in Israel, so I had to make myown as I went along,” he says. “Today, netsuke comprise a major body ofmy work. In my opinion, the netsuke is one of the world’s highest artforms.”      Weil is the only foreigner invited to join the Art Carver Society ofJapan. The induction ceremony nearly broke his legs, he recalls, fromhaving to sit on the floor with his legs tucked under him for theduration of the evening-long event.  “I literally could not get up. My knees were locked,” Weil recalls, with laughter. Describing himself as “the only Jewish, Sabbath observant netsukecarver in history,” Weil has already had several publicized exhibitionsof his creations in London and Japan, as well as one at the HaifaMuseum in 2002 that was scheduled for six weeks and extended to eightmonths.Weil collects Japanese as well as African art, which he considers to be“the mother and father of modern art.” “There would be no art nouveauwithout Japan,” he says. “No art nouveau means no 20th-century art aswe know it. No Picasso without Africa. No Les Demoiselles d’Avignonwithout Africa. No Constantin Brancusi without Africa. And no Van Goghwithout Japan and, for that matter, no Impressionism without Japan.”Although Weil used to exhibit his work widely and frequently in thepast, the netsuke show in Haifa was one of his few exhibitions inrecent years. “Since coming to Israel, I’ve been very, very quiet,” he says.Weil is, at best, less than enthusiastic about the general art scene inIsrael. “There is good work being done, but in my view an ‘Israelischool’ has not yet emerged. I think we are behind other, more advancedart countries like the US, France, Germany, England, where you havemajor world figures, both in the past and now. In my view, Israel hasnot yet produced a world figure in art. It is very, very hard for agood or potentially great artist to flourish here in Israel.”  When asked why he thinks this is so, Weil comes up with a surprising answer. “Art everywhere in the world has got to do with a couple of importantingredients. Number one: PR. Number two: Great gallery owners. Forexample, we can look at the beginnings of the American AbstractExpressionist school – de Kooning, Pollock and so on. The galleryowners who took these unknown works – the like of which had not beenproduced anywhere else in the world, they had balls. These greatfigures would not be great without these great gallery owners,” hesays. “There are, in my view, no great gallery owners yet in Israel,” Weilsays. “No one yet who will take a risk, who will take a gamble on workthey perceive to be special, who will exhibit it and promote it. Apartfrom his work, Jackson Pollock was made by one article in Lifemagazine. And Life did the article because they were bombarded by agallery owner. Here in Israel, the artist has to employ a PR person.The gallery owner isn’t involved. The artist is lumbered with the PRcosts. It’s unfortunately a different scene here. And I don’t thinkthat Israel can become a great art center until people realize that weneed great artists and great gallery owners.” Despite this assessment, Weil is cautiously optimistic. “These things will come,” he says. “We’re only 60 years old.”Georges Weil can be contacted by email, gweil@netvision.net.il
Advertisement
Subscribe for our daily newsletter