Tel Aviv's Rehov Herzl is where the city that never sleeps started out.

By AVIVA BAR-AM
JUNE 11, 2010 22:18
rehov herzl espresso bar 311
(photo credit: Shmuel Bar-Am)
Advertisement
Polish jeweler Akiva Arie Weiss, an avid Zionist who contributed to the cause, resolved to put his money where his mouth was and travel to the Land of Israel. In 1904, in the middle of his journey, he heard news that stunned him to the core: His idol, Theodor Herzl, had died of a heart attack at the age of 44.This is the first in a series of Tel Aviv Street Strolls, walks along the city’s most exciting, historic and colorful byways. It begins with Rehov Herzl – the heart of Old Tel Aviv.Naming the street for Herzl was no accident, for not only is he considered the father of contemporary Zionism, but his book Altneuland (Old New Land) was the inspiration behind Akiva Weiss’s decision to create the first modern Jewish town in the Holy Land.I recommend taking this circular walk during the week, when the street’s stores, bistros and coffee shops are busy with customers. This is also the time to take advantage of two wonderful (and free!) attractions: the unique mosaic walls inside the entrance to Shalom Mayer Tower, and a spectacular new Visitors’ Center called Herzlilienblum.Begin at the corner of Herzl and Ahad Ha’am streets. Behind you is the Shalom Tower – your last stop. In front of you stand the homes of Michael Polack (No. 1) and Weiss (No. 2).Weiss was so entranced with the Holy Land that he returned home, closed up his thriving business, and two years later brought his wife and six children (the youngest named Herzl) to Palestine. He had barely stepped off the boat when he heard of a meeting to be held that evening; a gathering of Jaffa Jews who would talk about the burning issues of the day. He already knew that their biggest problem was land, for Jaffa’s mixed Jewish-Arab population was bursting at the seams. Leaving his family to unpack, he hurried to the rendezvous. To his dismay, the only subjects that came up were, to his mind, petty and inconsequential.Impatient, he finally stood up and delivered an impassioned Zionistic speech, ending with an idea that may seem self-evident today but which was a bombshell at the time: He suggested they build an all-Jewish city! When they got over the shock a vote was taken, and this wildly original idea was accepted. A committee of five, including Weiss, was immediately charged with preparing a plan. Incredibly, within 24 hours the committee came up with a grandiose scheme for a wholly Jewish city, fully autonomous, with gardens, paved streets, sanitation and running water – almost unknown in this backwater of the Turkish empire. It took three years to acquire the land that would become Ahuzat Bayit, whose name was changed a year later to Tel Aviv. But eventually, on April 11, 1909, the 66 founding families were invited to a picnic on the sand. Here, using grey and white shells with plot numbers and family names etched inside, the lottery was held that gave birth to the tiny new neighborhood that grew into today’s metropolis.Weiss’s house, like others in the original colony, began as a one-story dwelling with a large front garden; he added a second floor in the mid 1920s. It was a gem of a place, for Weiss had planned on a career as an architect before his father died and left him in charge of the family business.Years later, as commerce developed in the area and the functional, no-nonsense International (Bauhaus) style became popular, many of the unique features of the house were destroyed. Luckily, in 2000 it was renovated, the first floor regaining much of its early 20th-century charm.On the other side of Rehov Herzl, the large edifice at No. 1 was built by religious Zionist pioneer Michael Polack. He died three years later, but not before founding the first yeshiva in Tel Aviv.Two well-known figures lived in the house with rounded balconies at No. 3: owner Shimon Ben-Zion was a renowned writer and educator who taught at the liberal, secular girls’ school in nearby Neveh Tzedek; while son Nahum Gutman, who was 12 when his family moved to Tel Aviv, was an author and artist particularly famous for his original style and as a foremost illustrator of children’s books.The large white building on the corner of Sderot Rothschild and Rehov Herzl was renovated a few years ago. It once belonged to Yosef Eliahu Chelouche, a Jaffa-born merchant, contractor and important public figure.On the corner of Rothschild, people of all ages are gathered around the kiosk/coffee bar 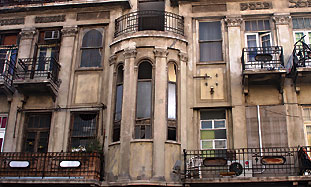