Many people are shy, but those who suffer from social anxiety disorder (also called social phobia) can become overwhelmed with anxiety in simple social situations. 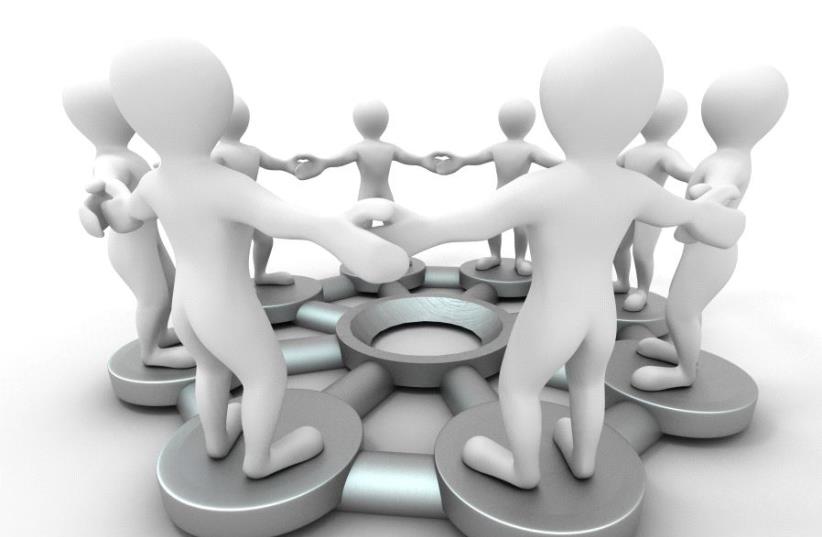 Social gathering
(photo credit: ING IMAGE/ASAP)
Advertisement
Yossi (not his real name), age 27, was a smart, perceptive young man with both a law degree and an MBA. He had served in an elite combat unit during his army service. He had a great job at a prominent law firm. Most of his work consisted of writing and reviewing contracts for businesses that his law firm represented.When he was offered a major promotion to represent his law firm at top-level business meetings, an opportunity to advance his career in the law firm, he turned it down.Why? For Yossi, the thought of being the center of attention at a major meeting, a requirement of the new position, gave him a severe panic attack. He began to sweat profusely, started to hyperventilate, and suffered from heart palpitations.
Read More...
Yossi had what mental health practitioners call circumscribed social anxiety disorder (SAD) – an intense, irrational and persistent fear of being scrutinized or negatively evaluated by others.People with SAD tend to be sensitive to criticism and rejection, have difficulty asserting themselves, and suffer from low self-esteem. Social anxiety disorder can be “limited,” like Yossi’s (he only feared being scrutinized in groups such as at work), or “widespread” – a much more debilitating condition that can make anything from walking to a table at a restaurant to attending a best friend’s wedding a reason to put that person into a state of severe anxiety. The major psychological defense for people suffering from this condition is avoidance, in other words, staying away from any social situation that can trigger panic and debilitating anxiety.Is social anxiety disorder just another name for being very shy? No, it is not, according to many leading researchers. The American National Institute of Mental Health conducted a survey in 2011 that took a nationally representative sample of 10,000 teenagers and interviewed them face-to-face. They found that while half of the youth self-identified as shy, only 12% of the shy group met the criteria for social phobia compared to 5% of the youth who did not identify as shy.Therefore, while there may be some overlap between the two conditions, they are not the same. Shyness is defined as feeling nervous or uncomfortable about meeting or interacting with people. It may be difficult to live with but shy people do not have major panic and anxiety symptoms as do people with social anxiety disorder.Furthermore, SAD, when untreated, puts up major roadblocks in the lives of those who have it. Like Yossi, many of these individuals avoid situations where advancement is possible. Moreover, others are afraid to go to parties as well as other social venues because they are overwhelmed with anxiety. SAD takes a toll on the lives of those who have it and compromises completing both educational and professional goals. These individuals clearly suffer from an overload of triggered and crippling anxiety symptoms.Treatment? Social anxiety disorder usually starts during one’s childhood or teen years, usually at about age 13. If left untreated, the young person goes through a very tough adolescence, a time when teens tend to connect more with their peers and separate from parents. If this young person avoids social gatherings because of his or her severe anxiety, the age-appropriate separation and autonomy stage of emotional development may be significantly compromised.Treatment begins with the individual asking for help and the therapist conducting a comprehensive evaluation.These individuals do in fact suffer from their symptoms and for many there reaches a tipping point where the individual seeks help. The treatment literature supports the use of cognitive-behavioral therapy (CBT) and relaxation training to help the person learn to cope more effectively with the hidden triggers that precipitate the severe anxiety. Like many other anxiety problems, psychiatric medication can be a useful adjunct in alleviating many of the severe symptoms part of SAD.I WANT to describe one CBT technique that has been very useful to help people with SAD. It is called exposure therapy.I ask my clients to construct a “fear hierarchy” of social situations. We start by working on the least anxiety-provoking social encounter and work our way up the list.Yossi’s SAD expressed itself as fear of groups. He was terrified about expressing himself in a group situation. For Yossi, the least fearful example of this was getting together with a few friends for a cup of coffee. CBT posits that negative or exaggerated beliefs are behind many emotional problems. When asked, Yossi told me that he feels his opinion about anything or any subject would sound stupid to his friends. Psychologically, I understood where these beliefs originated. Yossi’s father always put him down and was very competitive with him.Nevertheless, CBT focuses more on the here-and-now. Therefore, I asked Yossi to tell me what evidence he actually had that his opinions would be met with ridicule and that he would be judged harshly and/or humiliated by friends. Although he tried to find supportive evidence, the more he tried, the more he realized that he could not. In short, he realized his friends did listen to him with respect.He was helped to see the disconnect between his subjective beliefs and what was really happening. Subjective beliefs were triggering his severe anxiety.As a result, he began to let go of his negative beliefs in that situation. We did an experiment and I suggested he try to go out with friends for coffee a few times and see how he feels. The insights derived from CBT lowered his anxiety significantly and he reported he felt better.We continued to work on the fear hierarchy situations and, little by little, Yossi was able to reconstruct his negative beliefs into more balanced and realistic ones. After a year of treatment, almost all of his SAD had disappeared.One more word about shyness. I have treated many people who do in fact suffer from shyness. My point in this article is that it’s not the same as social anxiety disorder. Nevertheless, both conditions benefit from CBT.

The writer is a marital, child and adult cognitive-behavioral psychotherapist with offices in Jerusalem and Ra’anana. For more information see: www.facebook.com/ drmikegropper ; drmikegropper@gmail.com www.jpost.com 27 PSYCHOLOGY Fear of social situations