The Hai-Bar Yotvata Nature Reserve, with its not-so-reserved ostriches, is the closest you’ll ever feel to being in Jurassic Park. 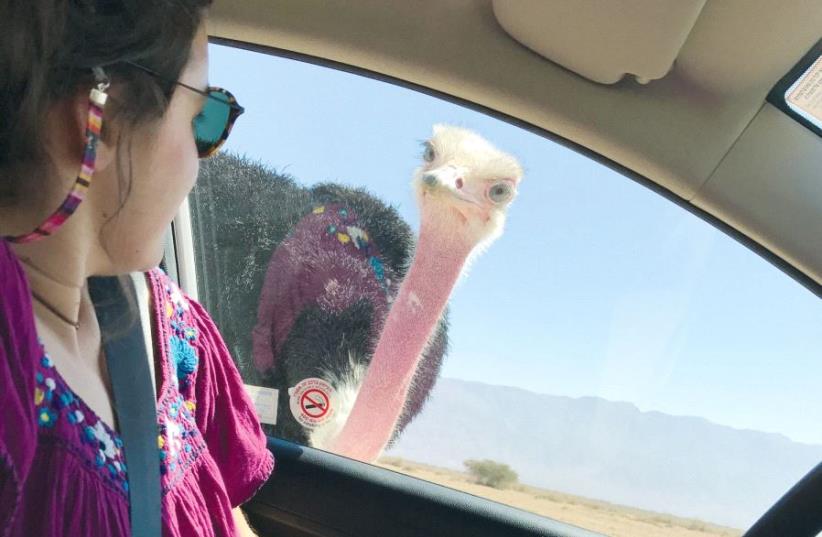 The Hai-Bar Yotvata Nature Reserve
(photo credit: BEN FISHER)
Advertisement
It’s a long drive from Jerusalem to Eilat through a desert that doesn’t vary too terribly much. And about 32 km. outside the city, you would be forgiven for looking out your window and thinking that the ostrich strutting along the side of the road is a mirage, brought on by the sun and hours of monotonous driving.You could ponder for years about that ostrich you saw on the road to Eilat, or you could one day discover the existence of the Hai-Bar Yotvata Nature Reserve, which would answer all of your questions. The reserve encompasses one of the largest salt flats in the South, spans 12 square kilometers in the Arava, between Route 90 and the border with Jordan, and serves as a home to more than a dozen species of animals mentioned in the Bible that have gone extinct or become endangered in Israel.

Although it receives an average of only 25 mm. of rain every year, there is enough vegetation to support the animals living on the reserve. The reserve was established in the 1970s under the auspices of the Israel Nature and Parks Authority, and more recently, in the 1980s, a few hundred hectares of land on the other side of Route 90 were fenced off to provide protection for the world’s last population of mountain gazelles.Herds of oryx and addaxes live on the reserve, as do cheetahs, hyenas and wolves. Some species, such as the Asian wild ass, have been reintroduced into the wild, and these handsome and noble looking donkeys have flourished in Machtesh Ramon in the Negev.However, it’s the aforementioned North African ostriches living in the reserve that are the stars of the show. It’s not until you get close that you realize how enormous and dinosaur-like the world’s largest bird is.The reserve tour is self-guided – the grounds are explored in your vehicle – and the ostriches are the only animals that seem to be remotely interested in you and your car’s presence. The various hoofed creatures and their absurdly cute offspring chomp happily on hay scattered by tractors, oblivious to the presence of humans, but the incredibly curious ostriches catch sight of a visitor from afar and begin to move their massive, feathered frames in your direction.It’s best to make sure that if you are bringing a rental car to the reserve, you have insurance not only for collision, theft, hail and fire, but also ostrich pecks, because although they are supremely inquisitive, they don’t seem to be the smartest creatures: They peck at the windshields, hoods and roofs of cars, thinking they’ll find food. Having an ostrich peck at your car is the closest you’ll ever feel to being in Jurassic Park. No one is quite sure whether an ostrich peck can break glass or not, and if you are scoffing at being afraid of a bird, you should know that they can grow up to 2.75 meters tall and weigh up to 168 kg.The ostriches aren’t the only birds Hai-Bar Yotvata has to offer; the reserve is currently running a mating program with its griffon vultures. As you drive through the premises and catch sight of their enclosure, signs warn you that driving too close to the raptors will disrupt their baby bird making process, and as the birds’ numbers have dropped precipitously in recent years, they need all the help they can get.The reserve provides an entertaining family stop on the road to or from Israel’s southernmost city. Entrance to the nature reserve costs NIS 28, with discounts for soldiers and students.