Jews had a large role and a rich past in the kingdom, but visiting the sites can be a bittersweet experience. 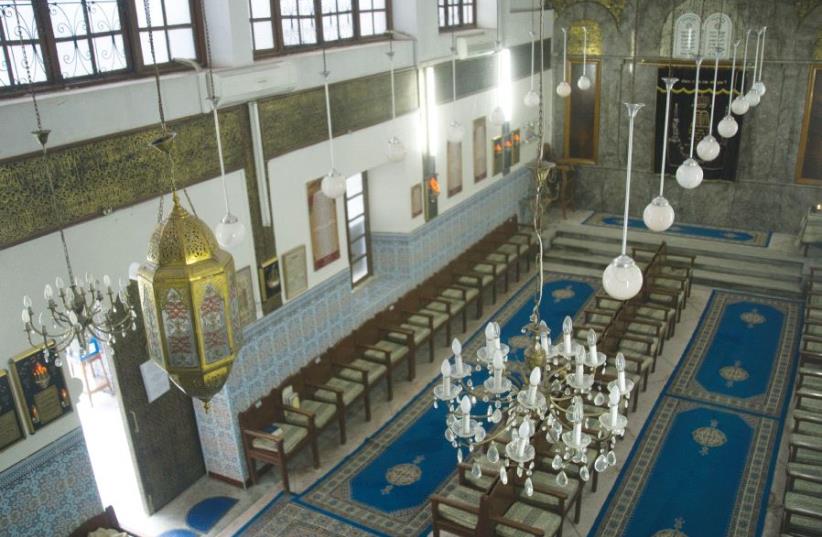 Sla’at al Azama Synagogue in the Mellah (Jewish quarter) in Marrakech
(photo credit: SARAH LEVI)
Advertisement
The kingdom of Morocco doesn’t need help convincing visitors that it has been around for a while.The four royal cities – Casablanca, Rabat, Fez and Marrakech – are bustling, mixing a unique contemporary urban sprawl with their walled-off medinas (old cities) complete with their own take on the classic market or souk.

While the periphery is rugged and dramatic, with the snow-capped Rif mountains in the north and Atlas mountains in the center fortifying the country, the Sahara in the south conjures up images of a vast desert with camels and nomads dotted throughout the landscape. The picturesque coastline stretches from the Atlantic Ocean to the Strait of Gibraltar, where the country is a close neighbor of Spain.It is here that the kingdom performs a delicate dance of maintaining a definitive identity, meshing European, Berber and Arab people and traditions to create an intricate mosaic of cultures, traditions and languages throughout this North African kingdom.The sovereign legitimacy of the nation is based on the belief that the royal family is a direct descendant of the Prophet Muhammad, thus creating a strong nationalist and religious loyalty to their king and country for centuries, as their kingdom’s motto states: “God, homeland, king.”The king, Mohammed VI, is highly revered among citizens and has made a number of important changes to improve the overall infrastructure and economy of the kingdom while preserving the national identity and customs of this vibrant land.Visiting Morocco is like stepping back into a time where items we take for granted as being mass-produced somewhere east of us are handmade by artisans whose skills have been passed down through the generations. The smells of grilled lamb, fresh olives and a rainbow of spices permeate the cityscape.The vast open landscape is green and lush, with rolling hills full of olive and argan trees. Djellaba-clad men and women can be found off in the distance shepherding herds of goats and sheep.And the tea, so much tea...In the cities, medinas are packed with merchants and artisans hawking everything from colorful leather shoes to handmade brassware. Connecting these shops and homes are narrow passageways that are often unyielding to large tour groups, which are often forced to hug the ancient stone walls in order to make way for men yelling “balak, balak! [get out of the way]” with donkeys carrying various items through the maze of winding streets and alleyways.Moroccan Jews share a proud and colorful history with rituals and cuisine unique to their roots. It was especially interesting to visit the source of these traditions and to witness such a large piece of Jewish history. 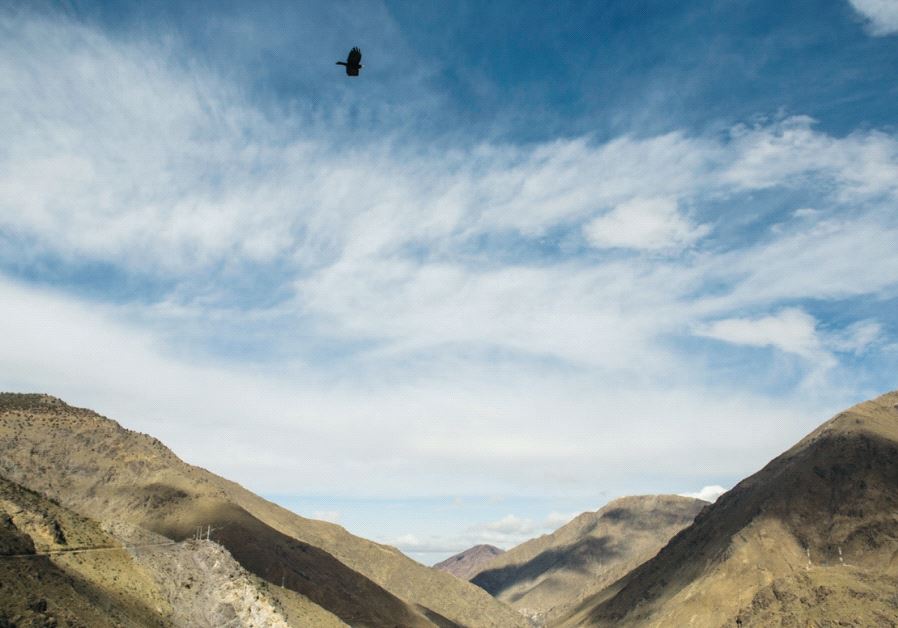 A bird flies over the Atlas Mountains. Credit: Sarah LeviCONTRARY TO the assumption that the Jews of Morocco are all of Sephardi origin, Moroccan Jewry, much like Morocco itself, has a varied and layered past. Starting from the destruction of the Second Temple, exiled Jews sought refuge in Morocco, where they lived among – and possibly intermarried with – the indigenous Berbers. A second wave of Jews came to Morocco around 200 CE, primarily from Greece. Jewish merchants set up shop and communities along the coast in cities such as Casablanca, Rabat and Essaouria.The next wave occurred during the seventh century during the Islamic invasion, shortly after the death of Muhammad in 622. It wasn’t until nearly a thousand years later that the exiled Spanish and Portuguese Jews fleeing the Spanish Inquisition in the late 1400s began pouring into the country.From that point on, the traditions and practices of all four waves of these Jews meshed not only with each other but with the land they inhabited. Their artisanship, architecture, cuisine and style of dress are noticeably indicative of Moroccan culture.Warding off the evil eye is something that was picked up and has been adopted into the culture; this is not unique to Jews but is found among many of those who inhabit the kingdom. In addition, people pay homage to their tzadikim in the form of “hilulas” or prayer festivals that take place annually in cemeteries all over Morocco. Thousands of Moroccan Jews, mostly from Israel but also from Canada, France and Morocco come on the anniversary of their tzadik’s death and joyfully pay their respects through lively meals, prayer and psalm readings near their graves.While European Jews were typically found in shtetls and praying at a shul, Moroccan Jews lived in the mellah and prayed at their local sla’ats. To be clear, mellahs were not a means to exile the Jews and they were not considered ghettos; on the contrary, they were to safeguard the Jews during times of instability.These mellahs (literally salt marshes) were established shortly after the Sephardi Jews arrived in Morocco, and can be found in all four royal cities as well as cities like Sale, Essaouira and Meknes.Jews of Morocco have historically enjoyed a relatively quiet and prosperous coexistence with their Muslim neighbors.However, we cannot ignore the fact that they were always considered second-class citizens within the kingdom.Their overall safety and quality of life were often not affected by this lower status and many will recall friendly, almost family-like, relationships between one another. 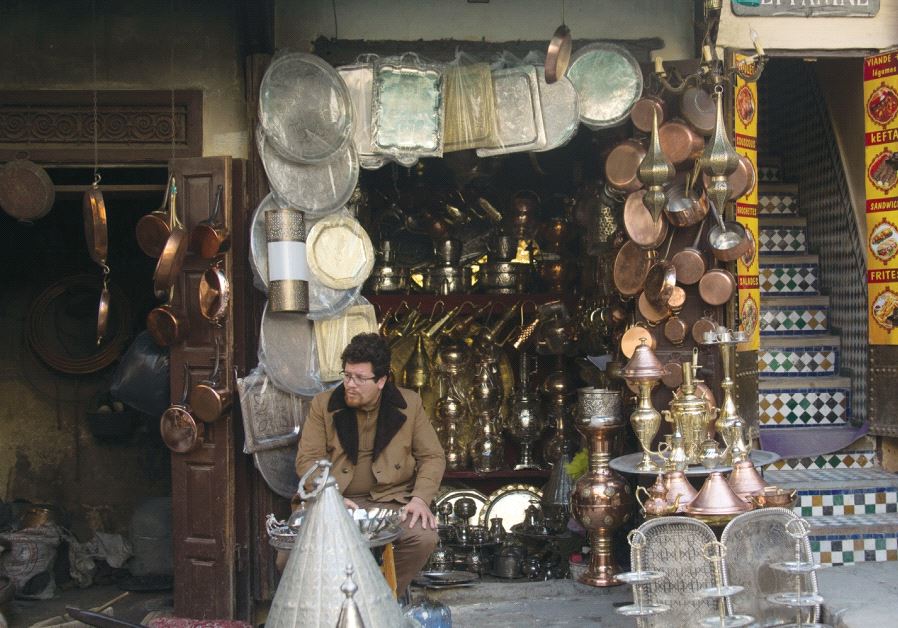 A merchant sits in front of a brassware shop in the Fez medina. Credit: Sarah LeviAt its peak, there were over 250,000 Jews in Morocco, but following the establishment of the State of Israel, those numbers dropped dramatically to around 3,000. A majority of those remaining resided in the seaside city of Casablanca; around 1,000 Jews still live there today. Casablanca holds the largest Jewish community in the Arab world and has the only Jewish museum in the Arab world. Guests can glimpse historical Moroccan Jewry – including clothing, old photographs, ritual paraphernalia and even a small synagogue on display. The only thing missing is a gift shop.The city also boasts more than 30 synagogues, a handful of kosher restaurants, Jewish schools, community centers and a Jewish cemetery outside the no-longer-inhabited mellah.The rest of what remains of Jewish life in Morocco is scattered throughout the country, mainly tucked away in the somewhat deserted mellahs in the cities. The remains of this dwindling community are a bittersweet lingering of times past.However, as the Jewish population shrinks in Morocco, there has been a recent effort in reviving these places throughout the country, as an increasing number of organized tours of mostly Diaspora and Israeli Jews, as well as Moroccan Jews taking a family roots trip are coming to visit and learn.One of these places is the Sla’at Alazama in Marrakesh. Hidden behind an unassuming blue door in the mellah is the oldest active synagogue in the city.Upon entering, an impressive blue and white courtyard leads guests into the decorative sanctuary that is a popular spot for tour groups and bar mitzvas.To keep up with this surge of tourism, artisans and merchants inside the medinas are ready to offer Jewish tourists an array of Moroccan Judaica, both old and new. In the bustling medina of Fez, one can purchase hanukkiot, mezuza cases, old Torah scrolls, dishes with intricately painted stars of David and even old dowry chests for young Sephardi brides. (“Free shipping! We take cash, euro, dirham, whatever you want”). Also in Fez’s medina, tourists can take a peek at Maimonides’s former dwelling place, which also serves as a cafe, adjacent to the famous water clock.Visiting Jewish sites in Morocco, like the dozens of synagogues and cemeteries scattered throughout major cities and outskirts can evoke mixed emotions.On the one hand, it is amazing to see relics of our shared past intact and open to the public. On the other hand, they are just that, relics from the past.Despite all of this, the Moroccan Jewish community is convinced that a revival is coming and Jews of Moroccan descent will in fact return to the land of their ancestors and bring life to these relics.