‘Our nekama [revenge] after the Shoah was not violence. It was love. It was about rebuilding our lives, getting married, having children, being good Jews, supporting Israel – making a difference with our lives and teaching this to our children, and later, to our grandchildren.’ – Carola Iserowski Greenspan

By DANIEL KLEO GIOSUÈ EISENBUD
Carola Iserowski Greenspan
(photo credit: The Greenspan family)
Advertisement
My grandmother, Carola, whose tragic and beautiful life has guided me on my most unlikely odyssey to Israel, is turning 90 on November 11. To honor her on this milestone, I am dedicating this column to her.Indeed, this is a love letter to her to reaffirm the invaluable life lessons she taught me, and to restate my promise to her that I will fulfill her wishes for me to carry on her legacy and never forget where I come from.Although she will not be able to read these words, or perhaps even understand them due to her Alzheimer’s, I write them with the same love and care as I would could she fully comprehend every one.Those of you who read my column with a degree of regularity should be familiar with Carola by now. If not, please allow me the honor of introducing you to the greatest person I have ever known.CAROLA ISEROWSKI Greenspan is the sole survivor of a family that once numbered 65, massacred during the Holocaust for being Jews. Despite this, she went on to live a compassionate and giving life to the fullest, and selflessly shared her uncompromised love with a world that had so wronged her.It is that love that has sustained me over the last year and a half here and lifted me to spiritual heights I have neither known, nor thought possible.What makes my grandmother so special, to me, is that if anyone ever had the right to be angry, hateful or misanthropic, it is her. However, Carola refused to give in to a darkness that would have effortlessly enveloped most of us with an unbreakable hermetic seal.Instead, she has lived a remarkable life that defines the majestic term “aliya” (ascent), without ever moving to the country she so deeply loves, and to which she inspired me to move.She is living proof that even in the face of unimaginable evil, sadistic cruelty and incalculable suffering, a person can still maintain their humanity – and even transform their pain into something beautiful. Something transcendental.In short, through her example, Carola taught me that nothing is impossible if it is done with pure love.THERE IS a famous biblical verse that she and my grandfather, Henek (also a Holocaust survivor, who passed away two years ago), always repeated with enormous pride and enthusiasm every time I was about to leave their apartment following one of our regular Saturday visits.In English, the verse can be roughly translated as: “If I should forget Jerusalem, may my right arm wither away.”Both ardent Zionists, I knew that what my grandparents were really doing when they recited these words was reaffirming – and passing on to me – their belief in the sanctity and necessity of Israel as the homeland for the Jewish people.And in my crude Hebrew, I took to repeating the second half of that verse with equal enthusiasm after they finished the first part, and would shake my right fist in the air for effect as I walked toward the door, which always made them light up.BEFORE I moved to Israel in July 2010, I lived with Carola for three months in her apartment in Riverdale, New York. There, two nurses cared for her in shifts around the clock, and I would sit with her for hours at a time, eat meals with her and tuck her in at night.At the time, it would have appeared that I was helping care for her, but in retrospect, I now realize that it was she who was caring for me.Even in her weakened, pained state, she selflessly shared her diminished yet still awe inspiring power and light with me. And I soaked it in like fuel that I knew I would need to sustain myself if I was going to make it in a country where I didn’t speak the language or have any family, friends or prospects.One afternoon, about a month before I made aliya, my mother, Barbara, came to visit, and as we were sitting around the kitchen table, I asked Carola if she wouldn’t mind writing her name on a piece of paper for me.As she was ridden with a combination of physical and mental ailments, I knew this request was the equivalent of her asking me to do a back flip on an oil slick. But I asked her to do it anyway, with a specific purpose in mind.After a few trembling, inauspicious starts – to my mother’s and my astonishment – she wrote her first name with near-perfect penmanship.My mom and I looked at each other in sustained disbelief afterward, as if we had just witnessed a miracle.I then thanked my grandmother profusely with hugs and kisses on her cheeks several times before taking the piece of paper with me to a tattoo parlor in the East Village of Manhattan to get the image permanently emblazoned on my right forearm. 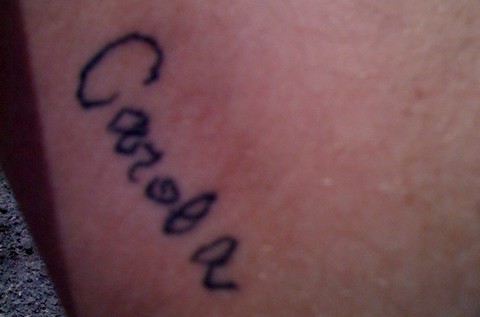 MANY PEOPLE who meet me assume this tattoo is a tribute to her for being forced to have a dehumanizing number barbarically branded on her arm during her time in Auschwitz. But that’s not so.While I fully recognize and honor Carola’s history and the importance of Jerusalem – where I now live – first and foremost, I recognize and honor my grandmother for teaching me about the unmatched power of love, and its ability to heal seemingly incurable wounds.There have been at least 100 moments over the past year and a half when I wanted to throw in the towel and move back to America. When I felt like I had nothing left to give.Every one of those times, I just stared at my grandmother’s name on my forearm and rallied like Rocky in the fight of his life.YOU SEE, I am now Carola’s messenger – and there is no opponent or situation on this earth that can keep me down.Even though I know I have joined a fight that I can’t win in my lifetime, every time I wake up, I hear a bell ring – and I stand with Carola’s love, dignity and strength in my corner.It is an unparalleled force.Happy birthday, Savta. If I forget you, may my right arm wither away.I love you, and will never forget where I come from.[email protected]
Advertisement
Hot Opinion