More than 50 years later, an Iranian intellectual’s praise of Israel is translated into English 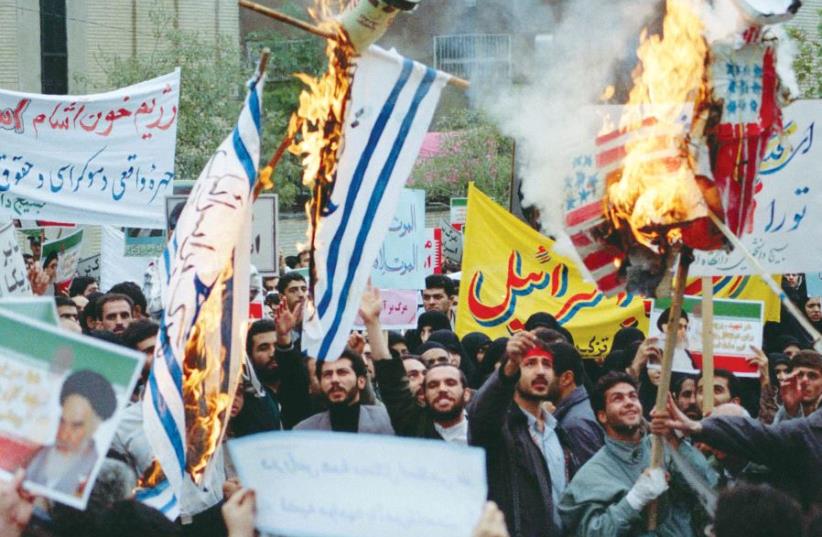 Iranian demonstrators hold placards and burn Israeli and US flags at a demonstration in Tehran in October 2000 – but this wasn’t always the prevailing Iranian approach
(photo credit: REUTERS)
Advertisement
It was February 1963. John Kennedy resided in the White House, The Beatles’ musical conquest of America was a year away and the media in the Muslim world were continuing their 15-year-long nonstop bashing of Israel.At the same time, following a two-week visit to that same Jewish state, a Muslim Iranian intellectual with close ties to the mullahs who 16 years later would establish a theocracy dedicated to Israel’s destruction, publicly lauded Israel and its leaders.

Jalal Al-e Ahmad, who died in 1969, was best known for his book Gharbzadegi (“Occidentosis”), which advocated that Iran, then ruled by the Shah, turn away from the Western influence that pervaded the country and return to its Islamic cultural roots.His essay “Journey to the Land of Israel” was made into a book in 1984 called Journey to the Land of the Angel of Death, despite the fact that the essay did not contain the phrase “land of the angel of death,” translator Samuel Thrope writes in his introduction. The Israeli Republic is the translation of that book, now available in English for the first time.What this Muslim intellectual wrote about Islam’s chief bête noire is truly remarkable. Israel is a “guardianship state” in the sense that it “governs and acts in the name of all 12 million Jews scattered around the world,” according to Al-e Ahmad. David Ben-Gurion is likened to the biblical Enoch and Moshe Dayan to David’s general Joab (Yoav).He also calls Israel a part of the East (“one end is Tel Aviv and the other Tokyo”). That East is the “hope of a world tired of the West,” and Israel in that area “is a base of power, a first step, the herald of a future not too far off.”Israel, he said, is a model for Muslims in dealing with the West. And he is happy that the Jewish state’s presence provokes its Arab neighbors, hoping that it may “plant the seed of the demand for justice and fairness in the heart of every Beduin Arab, and make all sorts of nuisance and trouble for their lawless, antediluvian governments.”He also praises Israeli kibbutzim – he visited Kibbutz Ayelet Hashahar in the Galilee – and is especially taken by Israel’s passion for educating its citizens. (Is it any wonder that a seminary student named Ali Khameni – who would replace Ayatollah Ruhollah Khomeini as head of the Iranian state 26 years later – phoned Al-e Ahmad to berate him about that essay on Israel?) It is true that Al-e Ahmad also criticizes the Jewish state. It is a “bridgehead of Western capitalism” and “a coarsely realized indemnity” for the crimes of Europeans (“that is the West’s sin and I, an Easterner, am paying the price”).In addition, following the Arab defeat in 1967, Al-e Ahmad echoed Arab rage against Israel and world Jewry. He wrote that Zionism “is the other side of the coin of Nazism and Fascism”; that “the French press is in the hands of the Jews... and the Jews manage all the television transmitters in New York”; that for 20 years, the Israelis “have been seizing Arab land bit by calculated bit.”Nonetheless, he didn’t join the Arab call to push the Jews into the sea, which he called “nonsense.” He continued: “The only solution to the problem is forming a federal government of Arabs and Jews.” So, he recognized, in effect, that Jews had a right to live in the Land of Israel.Yes, the Iranian intellectual got swept up in the despair and frustration following the Six Day War. Nonetheless, Thrope is clearly impressed with what Al-e Ahmad had written earlier. The translator gushes in his essay: “An Iranian who loved Zionism! A Muslim who loved Israel!” What’s truly amazing, Thrope notes, is that Al-e Ahmad praised Israel “in terms usually reserved for righteous clerics, religious pageants, and the 12 holy Shia imams.“He is envisioning Israel as a particularly Islamic kind of ideal polity in which divinely guided leaders – less than prophets but more than politicians – rule.”BERNARD AVISHAI has a somewhat different take.Avishai, an author and adjunct professor at the Hebrew University, wrote “Among the Believers,” another introductory essay in this book. He notes that Al-e Ahmad wanted “divine socialism,” and perhaps that is why the “guru to the ayatollahs” so admired what he saw as an Israeli version of what he desired.While Iranian and Israeli leaders may hate each other, they have much in common, the professor believes, especially in “their attitudes toward religious authority, political and economic populism, and the West.”This convergence of ideas between those two countries’ leaders happened in part because of decisions made by Ben-Gurion. The country’s first prime minister was not personally religious, but he decided to ally the Labor Zionist movement with small religious parties and gave in to their demand that “Jewish” (a definition required by the Law of Return) meant a person born of a Jewish mother or one who was converted to Judaism by an Orthodox rabbi. He also gave the Orthodox establishment control over marriage, divorce and burial.So, Avishai writes, Al-e Ahmad admired the Jewish state’s “compromised democracy.”But Israel need not have evolved in that way, Avishai believes. It might have become a “Hebrew Republic.”“The original Labor Zionist idea that ‘Jewish’ might be a novel, inclusive national category – might refer to anyone who spoke Hebrew and lived in the Jewish national home – was effectively abandoned.”And, I believe, fortunately so. OK, I get his point – their crazies, the mullahs, have something in common with our crazies: West Bank, pro-settlement, anti-two-state rabbis.Nonetheless, the Hebrew Republic would have been a non-starter. First of all, the Arabs wouldn’t have accepted it. Secondly, no American, British or French Jew would have supported such a state politically or financially.Most important, why would Jews have undergone severe hardships – some traveled by foot from Russia or Ukraine to the Land of Israel – and taken risks to live in a country in which Jews would constitute a minority of the population? Isn’t that what they were fleeing? Wouldn’t such a Hebrew Republic be a betrayal of their Zionist ideals?

Aaron Leibel is a former editor at The Jerusalem Post and Washington Jewish Week. His novel, Generations: The Story of a Jewish Family, which spans 1,500 years and three continents, is available online.