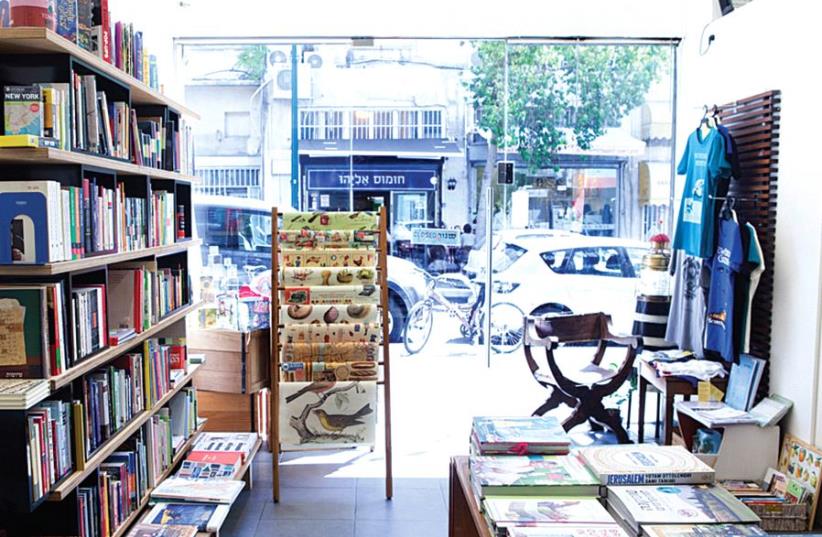 The Migdalor in Tel Aviv
(photo credit: DANIEL SCHECHTER)
Advertisement
Karon Hasfarim, Kiryat Tivon The bookstore Karon Hasfarim did not offer any specials for Israel Book Week, since it holds special events every week. It has held close to 900 book launchings over the past few years, and recently held a festive event to celebrate the publication of the book Hope under the Gray Sun by Anna Blandiana, the renowned Romanian poet. The clientele is eclectic and communal, but the store also attracts book lovers from all over the country.The vast majority of the books found at Karon Hasfarim are second-hand, such as the extensive collection of fairy tales and classic children’s literature.“Ten percent of our books are new, but we don’t carry bestsellers like John Grisham and such, and instead focus on classics,” says Avi Penn, who founded the store with Gilad Alon. “We don’t carry new books because we can’t compete with the big cartels.”Karon Hasfarim, 2 Hakalaniot Street, Kiryat Tivon Hamigdalor, Tel Aviv When Rona Yitzchaki and Dalia Shelef met seven years ago, they talked all the time about their longtime dream of opening a bookstore. Never did they imagine that it would be such hard work.“We are constantly injecting more oxygen into the place,” Yitzchaki says.Their bookstore bounced around a few spots before landing in its current location in the Gan Hahashmal Complex in Tel Aviv. The shop is beautiful, inviting and full of great books.The co-owners also hold story hours, summer camps, writing workshops for adults, book launchings and other literary events. The writer Meir Shalev, for instance, will be at the store to engage with kids and their parents about his new children’s book Panda Goes Herding.“We started out so small, but with big dreams and the energy to take us in a variety of directions,” says Yitzchaki. “There is intense competition in this small market, and the bookstore chains haven’t made our lives any easier either. We mostly stock unique books, such as art and design, and try to push books by small, independent publishers. We love giving exposure to young artists who are just starting out.”Hamigdalor, 1 Levontin Street, Tel Aviv Tmol Shilshom, Jerusalem In 1994, David Ehrlich had a dream: to open a bookstore with a little café inside.“The opposite is what ended up happening,” he admits. “The books sort of got pushed aside when the restaurant ended up becoming the more lucrative of the two businesses.”Hundreds of second-hand books line the walls of the café, and diners are welcome to peruse the books as they wait for their food to arrive.“Many people who come eat here don’t even know about the books ahead of time,” Ehrlich says “but by the time they leave, both their body and soul have been nourished.”Every week, Tmol Shilshom hosts literary and cultural events, such as an exploration of S.Y. Agnon’s work (after which the restaurant was named), the subject of exile and return to the Holy Land in modern Jewish literature, and even the distribution of flyers for a Haaretz short-story competition. Of course, this is all on top of the Lonely Planet recommendation decreeing that Tmol Shilshom serves one of the 10 best shakshukas in the world.

Tmol Shilshom, 5 Yoel Salomon Street, JerusalemMilta, Rehovot Until three and a half years ago, Michael Feinstein and Ora Niv worked in one of Israel’s bookstore chains, but a combination of personal reasons and what Niv describes as a gradual change in mood and the way the chain operated is what caused them to leave.“Store managers used to have a certain amount of autonomy, but then that was taken away, and they made no effort to hide this from us,” she says.So one day, Feinstein said to Niv: “Let’s open up a good old-fashioned bookstore,” and within a short time they had launched Milta in Rehovot.“We believe that Milta looks like a proper bookstore: lots and lots of books, some of which are not new at all – some are up to 200 years old,” says Niv.They also hold special activities, such as jazz concerts on Friday afternoons, lectures and story hours for children.“Every week we hold some sort of activity for the public,” says Niv, “because we’ve seen that people are thirsty for these types of events.”Milta, 36 Ya’acov Street, Rehovot Ashan Hazman, Beersheba When Tzachi Goldberg was living in Cape Town, he saw a café that was also a bookstore and fell in love with the concept on the spot. In 2006, after he had made aliya, he opened up a bookstore in Beersheba called Ashan Hazman (Smoke of the Time), where patrons could not only buy used books, but also enjoy a drink or a bite to eat, stroll through the gallery, buy music disks and even attend a fringe performance focusing on local artists.Musician David Peretz was so enamored with the shop that he wrote a song about it: “Ashan Hazman rises toward the low ceiling; outside, the No. 8 bus misses its stop once again, and Tzachi smokes one last cigarette, punished with a life sentence of living in the dilapidated neighborhood. And the books all around him have not yet taken an interest in the stories trapped inside Beersheba’s housing projects.”Ashan Hazman, 17 Anielewicz Street, Beersheba Holzer Books, Jerusalem Holzer Books is the only place in Jerusalem where you’ll find a homeless person engaged in a discussion with a history professor about Roman philosophy.“And it turns out that the homeless man speaks Latin better than the professor,” Lior Holzer, the bookstore owner, says with a smile.In 2010, Holzer opened his store “out of a love of books and a love of the people of Jerusalem.” He currently stocks 55,000 books, including works in Hebrew, English, German, French, Russian and Yiddish. He carries novels, historical works, tomes on philosophy, as well as Jewish religious texts, psychology and poetry.Holzer Books, 91 Jaffa Road, Jerusalem Sipur Pashut, Tel Aviv For 14 years, the Sipur Pashut (Simple Story) bookstore in the Neve Tzedek neighborhood of Tel Aviv has been watching how the picturesque area changes from year to year.“The goal of the bookstore owner, Roni Kramer, has been to provide a platform for the unique voices of young people,” says Mira Rashti, the manager of Sipur Pashut.According to Rashti, the advantage of an independent bookstore that’s not part of a chain is its ability to recognize trends and effect changes quickly. For instance, Sipur Pashut was one of the first to feature nonfiction and poetry books, and is currently promoting activist literature and books with social agendas.“In an era of political change, an independent bookstore can choose very carefully which books it sells,” says Rashti. “Its customers understand that books are not a commodity. They have added value that need to be taken into consideration.”She adds that the store recently began publishing the Hebrew edition of the international literary magazine Granta, and is also collaborating with the Ruth Kanner Theatre Group to establish a pop-up activist store and reading circles of poignant political treatises.Sipur Pashut, 36 Shabazi Street, Tel Aviv Translated by Hannah Hochner. Originally published in Ma’ariv.