Sisters in arms: Female veterans from the US and Israel combat trauma together 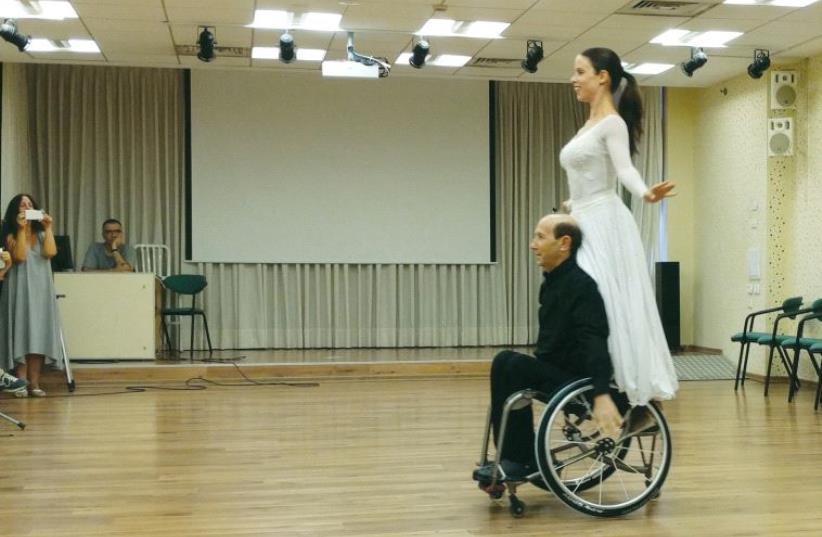 A dance performance by Adam Greenfeld and Tal Galor at Beit Halochem, Tel Aviv
(photo credit: ARIANE MANDELL)
Advertisement
However treacherous the battlefield, some of the greatest horrors await soldiers at home.The US Department of Veterans Affairs has estimated that in 2014 approximately 20 American veterans a day were committing suicide. 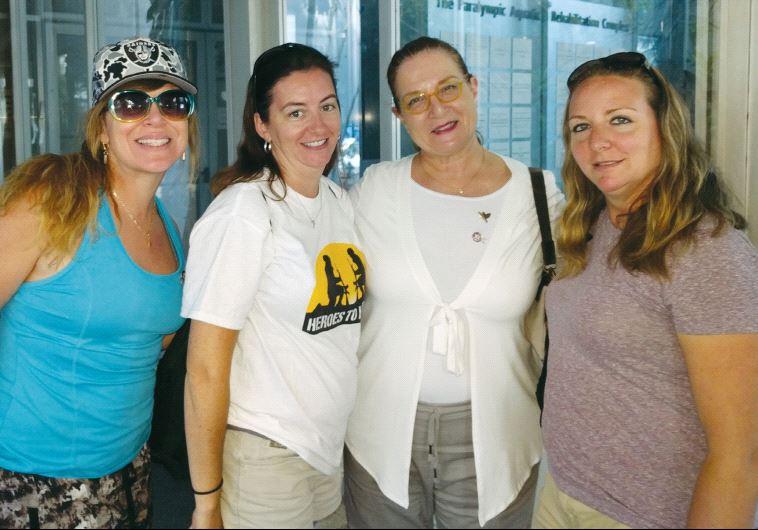 Heroes to heroes participants with Anat Yahalom (second from right)
“Men who are wounded,” she said, “they’re war heroes. Women, on the other hand... it’s a different story. Scars are handsome on a man, but not so attractive on a woman.”Another veteran amputee who became a star runner saw her crying and told her she needed to swim.“If you need to cry,” he said, “then go cry in the water. No one will see you.You can shout in there and you can cry in there, and you can sing in there.”She took his advice, bought herself some tights, a swimsuit and a top (which she referred to as the “first burkini”) and took her sorrows into the pool. Everything changed after that.Eventually she married and had three children. She swam regularly and after two years could walk with crutches, clinging to a wall or supported by her husband, Rafi. Today, she walks completely unaided, and no one would suspect her decade of agony and immobility. She has been an art educator in the Galilee. She served as a Jewish Agency aliya emissary in South Africa. She founded youth programs.She took up hand-bike riding, started a riding group for disabled women and then completed the New York hand-bike marathon.Yahalom credits her recovery in large part to the enduring support of her community.“Together, we can fight and we can win anything,” she said.“If you are by yourself and you stay behind... then, well, you stay behind. Your life goes nowhere.”She added that the true story of Beit Halochem is social rehabilitation.“If you miss a few days, people call you,” she said. “They ask: ‘Where are you? What happened to you? Why didn’t you come by today?’” Reclusiveness is highly discouraged among disabled IDF veterans.“Come,” she said. “Let’s ride together. Let’s talk. Let’s have a coffee by the beach. Let’s cry together. You can cry, it’s okay, but then you pull yourself together.”THAT, PERHAPS, is where Heroes to Heroes truly helped the women on the trip: It connected them to each other. They finally had a community of peers on which to lean.Two of the Israeli veterans, Mimi and Rami, both remarked on how startlingly different the circumstances of American female veterans were from those of their Israeli counterparts.“They’re often the only one in their group of friends who is a vet, and the only female vet they know at all,” one remarked.This points to the staggering difference in participation between the two countries. CNN reported that in 2013 there were approximately 200,000 American women in the military (less than 1% of the female US population), compared to Israel where, despite exemptions for religious and minority women, the majority of Israeli females serve in some capacity. In Israel, where it is more likely that women have female friends who can relate to their military experiences, in America female veterans are very isolated.One American participant, Kamilla, described one highlight of the trip as getting to have “girl time” with other former female soldiers.“We’re getting really close to our Israelis,” she said.“It’s comforting. It’s home. This is family. It’s so fun to learn to do [the religious women’s] hair wraps. All the girly stuff we normally miss. You can’t really engage with your normal friends like this.... What am I supposed to say? ‘Wanna do our nails together and hear about what’s freaking me out?’” she said.“Family is home,” Kamilla continued. “But the army is, too, in a different way. They’re there for you when they don’t have to be.”According to Judy Schaffer, the founder and director of Heroes to Heroes, the participants “really bonded as women.It was beautiful. And it was upbeat, it was fun – they laughed, they cried together. And for many of them who had isolated themselves, it was the first time to be part of a group again....It was women bonding as only women do when they’re free. It was wonderful to see.”On the last night of the trip, Schaffer recalled, one of the Israeli women led the Havdala service that closes Shabbat. She wrote each of the American women’s names on a candle, lit each with the Havdala light, handed them out, and then had them blow out their candles together.“This brings the light from the Havdala candle into your lives in the United States, and every time you look at this candle, think of this light,” she told them.It was the last thing they did on the trip before they boarded their planes for home.Both nations have a long way to go to support female soldiers suffering from trauma, and a longer way to ending assaults on women-in-arms. But Heroes to Heroes and Beit Halochem are taking the important first step of bringing veterans together, bringing them out of isolation and introducing them to communities where people can understand and help relieve their pain.