Sylvia goes to Cannes – in a documentary about her life. 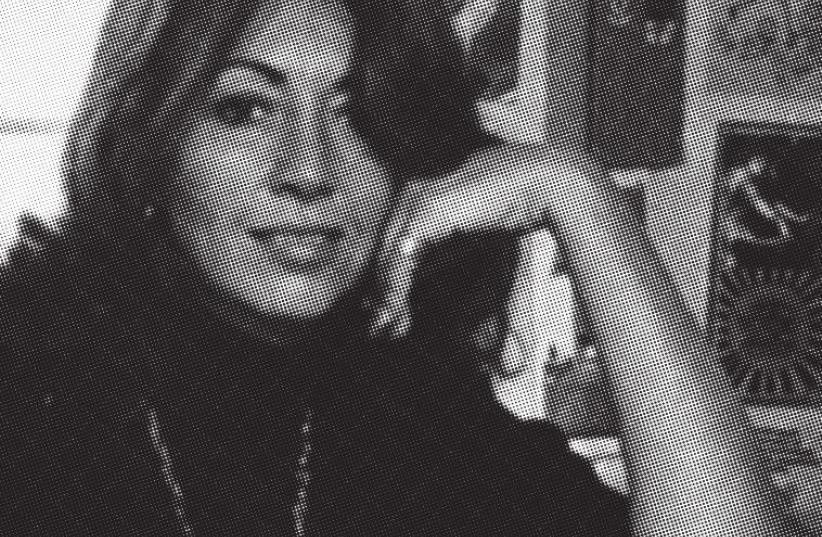 Ace Mossad agent Sylvia Raphael strikes a pose in her apartment in Paris in the Seventies
(photo credit: DAVID ‘BUNTY’ RAPHAEL)
Advertisement
My interest in Sylvia Raphael began at the end – her end.“One day when true peace comes, they will write books about her, name streets after her and make movies of her life,” wrote Eitan Haber, former defense correspondent and close associate and adviser to former prime minister Yitzhak Rabin, in Yediot Aharonot in 2005, following the funeral of top Mossad agent, Sylvia Raphael at Kibbutz Ramat Hakovesh.Her “unveiling” at the world premiere on the March 29 at Yad Lebanim in Ra’anana is proof that the day has assuredly dawned.Interviewed in the movie Sylvia – Tracing Blood following years of personal interest and research, I am proud – as a South African – to introduce the film and its director Saxon Logan, before both departed for Cannes. 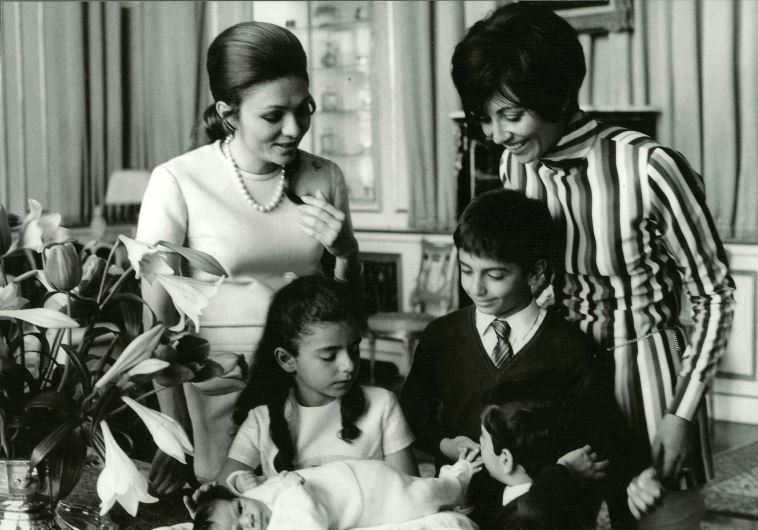 MY JOURNEY with Raphael began one morning in 2005 when my eyes zoomed in on a brief report on Page 3 of The Jerusalem Post regarding a funeral that had taken place the previous day, a few kilometers north of my home city of Kfar Saba.It revealed that the deceased was a South African, that she had been a Mossad agent convicted of a botched assassination in Norway connected with the 1972 Olympics Games Munich Massacre. It also seemed to hint at her not being Jewish. Fed on crumbs, I was hungry for more, and it came in the form of a line that to most would be inconsequential, but for me was alluring and illuminating: “The entire perimeter of the kibbutz had been cordoned off by the police.”This was a red rag to the journalist’s Gallic bull. The message between the lines was clear – the funeral would be attended by a Who’s Who of Israel’s security community, and the powers- that-be did not want the general public to know too much about it. Why? While her remains were lowered into the earth, it was her life that invited unearthing.My first question was why would a woman, not Jewish, dedicate the best years of her life, risking life and limb, to a foreign cause – the survival of the Jewish state? Shmuel Goren, a former deputy head of the Mossad, had also expressed after the funeral, “It is a pity that there are not more like her.”

I began digging, interviewing her friends and family and her lawyer husband in what would lead to the first of many published articles – including in the Post, and finally culminate in being interviewed myself in the film about her: Sylvia – Tracing Blood.Haber’s 2005 prediction was figuratively emblazoned at the 2016 packed-to-capacity Yad Lebanim auditorium. The rights to the movie had already been bought by eOne, the world’s leading movie distributor, who granted permission for the world premiere in Israel for the benefit of Keren Beth Protea.The Keren is a recognized Israeli nonprofit foundation that subsidizes many former Southern African senior citizens who either reside in the secure and caring retirement home of Beth Protea in Herzliya or who choose to remain in their own homes.Director Logan felt he “had come full circle.”“Without me knowing until yesterday,” he said, “I was unaware that my financial backers were major financial supporters of Beth Protea.”Here were philanthropists supporting a communal cause of caring for seniors, while at the same time financing a movie that honored a fellow South African looking out for all Israel.At the movie’s end, many in the audience remained mesmerized in their seats. Mainly former South Africans, they sat stunned, acknowledging how little they knew “of one of our own.”From an early sequence in the movie of the rocky, arid desert and desolate terrain of Graaff-Reinet in South Africa’s Eastern Cape where Raphael, born to an atheist Jewish father and Calvinist Afrikaner mother, grew up, to the fertile fields and green and orange specked orchids of Kibbutz Ramat Hakovesh where she was laid to rest, spans a journey of love, passion, dedication and deception.I recall her Norwegian husband, Annaeus Scholdt, telling me in 2005, “She was a gifted woman; quick witted; and well qualified to do what was required of her. I still do not know – even as her husband and lawyer – what she had done prior to her business in Norway. She was the consummate professional; she would never speak to me about her Mossad past. All I know it was extremely dangerous.” 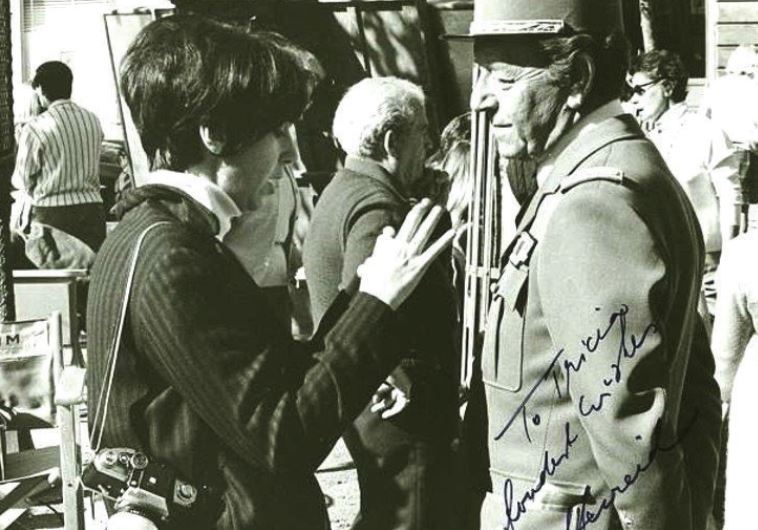 RAPHAEL TOOK over from Israeli spy Eli Cohen following his public hanging in Damascus in May 1965, defying the Syrian assumption that Israel would never replace him with a woman.In 1967 she watched from a hotel balcony in Egypt as Israeli mirages flew over on a bombing mission. As an intimate friend of the Jordanian royal family, Raphael used to babysit the current monarch of Jordan, King Abdullah II.Only a few years earlier she had joined the stream of young Sixties adventurers volunteering on kibbutzim, attracted by the alluring amalgam of ideology and fun on Israel’s agricultural cooperatives. She found herself on Kibbutz Gan Shmuel, near Hadera. If her good looks were attracting attention, there were others interested as well. The Mossad spotted and recruited her.The late Sixties and early Seventies were turbulent times.Palestinian terrorism was constantly front-page news, replete with aircraft hijackings, assassinations and attacks on airports and embassies. Rising rapidly to become a top Mossad operatives, Raphael posed as a Canadian freelance photojournalist, Patricia Roxburgh, joining an agency in Paris known for its sympathies for the Palestinians.Dropping subtle anti-Semitic barbs on the European cocktail circuit, she was welcomed into the anti-Israel circles and eventually into inner sanctums of the Arab world.Her brother “Bunty” Raphael says in the movie, “One day she was in Cairo, the next in Damascus and a week later in Mogadishu. Who had even heard of Mogadishu in those days? We all thought she was covering stories for her publisher. Now we know she was leading a complete double life.”She had been one of the very few agents who penetrated the PLO bases in Jordan and Lebanon when an unattractive little- known gangster dressed in khaki, a red-and-white headscarf and a holstered gun on his belt, had set his sights on causing as much mayhem and destruction in pursuit of high-profiling the Palestinian cause. Did the “Beauty” and the “Beast” ever meet? With both Arafat and Raphael now gone – Who knows? Rising through the ranks to become one of the spy agency’s star operatives, most of Raphael’s exploits are still shrouded in mystery, apart from the one assignment that went horribly wrong.In July 1973, Raphael joined a hastily assembled team of Mossad agents to track down Ali Hassan Salameh, Black September’s operations chief in Europe and suspected mastermind of the Munich massacre. In the sedate Norwegian village of Lillehammer, the team gunned down a Moroccan waiter called Ahmed Bouchiki instead of Salameh. The movie shows how Salameh deviously masterminded the Mossad to kill the expendable waiter. Sylvia had expressed constant doubts about the mission, but her bosses authorized the mission to proceed.It was while Raphael was languishing in prison – her health declining – that a David “Bunty” Raphael arrived in Israel from Johannesburg and joined Kibbutz Ramat Hakovesh as a volunteer.“He worked with the children and made such a fine impression with everyone,” says Hadas Zamir, who was born on Ramat Hakovesh and became a close friend of Bunty’s.“We were reading all the time in the papers about Sylvia and naturally we would ask Bunty if he was related. He denied any connection, but after having disappeared for three weeks without telling anyone, he returned and revealed that Sylvia was his sister. It was then that the kibbutz decided to adopt Sylvia. We wrote letters and sent gifts on her birthday and Passover to make sure that she knew that there were people who cared and had not forgotten her.”Released early for health reasons, one of the first places Raphael made for was Kibbutz Ramat Hakovesh.“The kibbutz had prepared a party in the dining room packed with people waiting to welcome her. I received a message that Sylvia could not break through the cauldron of media people that had surrounded the kibbutz. We felt we were under siege. A few of us got into a jeep and went to look for her, and at 11 o’clock that night we sneaked her in, having taken a serpentine route through the orchards.”How appropriate that even a homecoming ended up for Raphael like a complex espionage operation. 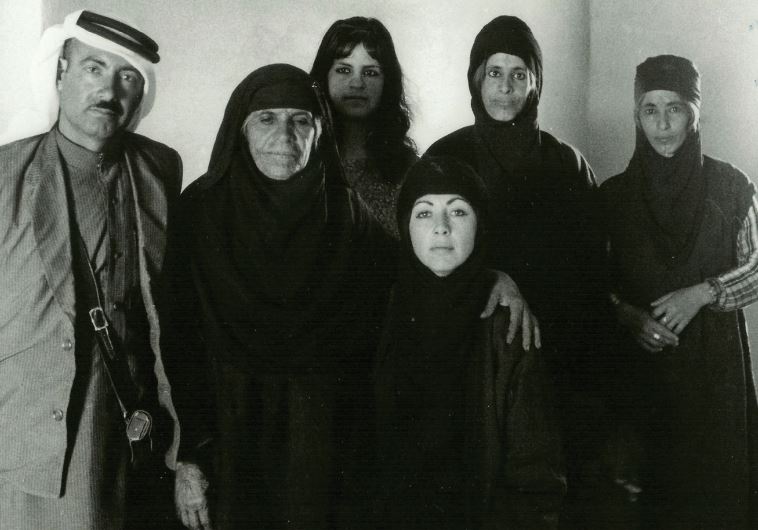 RAPHAEL TOOK an apartment in Tel Aviv, where she became a teacher, but would spend weekends on the kibbutz with Scholdt.“The two of them were very much in love and they worked in the fields and with the cows. They looked like typical kibbutzniks,” recalled Zamir.Raphael married Scholdt, and after two years the couple returned to Norway, where they lived for a few years before moving to Pretoria.No matter how professional, in the furtive world that Sylvia had lived, mistakes with lethal consequences were always a possibility. Hazards of the “trade.”The Mossad’s botched assassination would prove a prelude to another mistake, this time from the other side. In September 1985, Force 17, a splinter group of the PLO, murdered three Israelis on a yacht off the coastal resort of Larnaca in Cyprus. They claimed publicly that the victims were Mossad agents, one of whom was the prized Sylvia Raphael. They believed they had their revenge.Not so. Raphael would live another 20 years before succumbing to leukemia at the age of 67.She was not without her humor – “Dark humor,” as her friend Zamir from Kibbutz Ramat Hakovesh reveals in the movie.“When Sylvia told us she was dying of leukemia, she added, “All my life I wanted to lose weight; I did not realize I would have to die to achieve it.”Logan mentioned in his address before the premiere showing: “When a young relation asked Sylvia what she had done while working for the Mossad, she replied, “Well, sweetie, I can only whisper to those who I have helped pass on. You’re a little young; are you sure you want to hear anymore?” Following the 1972 Munich Massacre, then-prime minister Golda Meir’s clear and simple message – “mess with us, and you will pay” – set the new rules of the game that are still in play today. One of Golda’s messengers was Raphael, who took the leading role in taking out the masterminds and murderers of Israel’s 11 athletes.IN 2015, I had occasion to interview Haber on the 20th anniversary of the assassination of his close friend Yitzhak Rabin. At the end, I asked him: “You said Sylvia was one of Israel’s best agents. Can you tell me more?” He replied, “Firstly, she was not one of the best, but the best, and secondly, I will say no more.”I doubt a Torquemada of Spanish Inquisition infamy could have extracted any more information on Raphael from Haber.Nevertheless, close to the movie’s end he says, “I say to all the Jews in Israel, you should go twice a week to the grave of Sylvia and lay flowers for the contribution she has made for future generations.”No doubt this line resonated with many in the audience. The next morning, I received calls from those wanting to lay flowers on her grave, and on April 11, a large group will be “visiting” Raphael at Ramat Hakovesh.Inscribed on her headstone are the words: “I want to be buried in the soil of my soul.”I know of few who could have expressed their commitment to Israel as passionately as Raphael, who went to the very limits to ensure that in Abba Eban’s words: “Israel’s future will be longer than its past.”  The feature-length movie will be shown in cinemas in late summer 2016.