As the wave of terrorism enters its fourth week in Israel, the lessons and dangers of incitement over al-Aksa Mosque are not forgotten in Hebron. 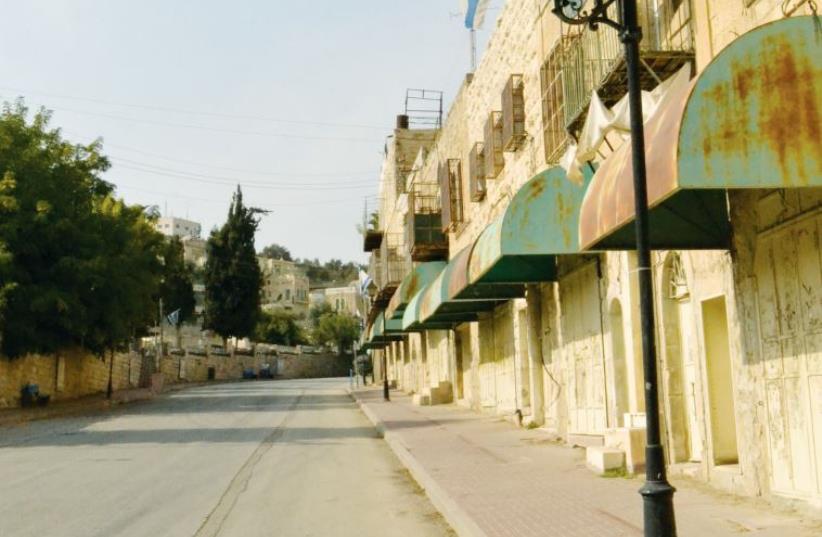 Upper Shuhada Street leading from the Avraham Avinu Jewish community to Beit Hadassah
(photo credit: LAURA KELLY)
Advertisement
"The situation is crazy. I hope it will stop soon. This is leading nowhere,” says Lina A.Lina was born in Hebron in 1990 and after studies in Al-Quds University, east of Jerusalem in Abu Dis, she finds herself spending more time in the city of her birth. She strolls down Shuhada Street, the main street for Jewish residents, which leads from the Tomb of the Patriarchs in central Hebron toward the small Jewish community on the hill above, called Tel Rumeida.It’s a supremely quiet day, but there is a feeling of being anesthetized – that there is violence under the surface.“Those who started the stabbing have harmed our everyday lives. Now the soldiers are suspicious of everyone, and I have to go through the checkpoint with my hands up, even if my phone is ringing. If I reach for it, I fear they will shoot me,” says Lina. “This is not a third intifada, this is just leading to more anger.”A few minutes before, Lina – wearing a colorful hijab and tight dark blue jeans – had crossed through the “container” checkpoint at the north end of Shuhada Street. It was at this checkpoint that Hadil al-Hashlamon was shot on September 22 after reportedly approaching soldiers with a knife.Lina’s sense of fear is palpable. “Look here. This is where they killed Fadil [Qawasmi] on Saturday after they said he pulled a knife. But what really happened? He was harassed by a settler. The video shows that they planted the knife afterward.”This is where the conflict between Israelis and Palestinians collides, with the diametrically opposed viewpoints of the two sides.For Palestinians like Lina, 18-year-old Fadil Qawasmi is a victim – an innocent teenager walking home on the street, harassed and killed.For Jewish residents like Tzipi Shlissel, who works at the Beit Hadassah Museum down the street, Qawasmi was the perpetrator of a stabbing attack that endangered her life. She was walking on Shabbat when she passed Qawasmi. “I heard shooting and he [the Jewish man] shot the terrorist who would have come at me, it was a miracle.”An inconclusive video that exists shows a Jewish man clad in white for Shabbat with a pistol, moments after shooting Qawasmi. Israeli soldiers, running to his aid from Beit Hadassah and the nearby “container” checkpoint are on the scene. Qawasmi is on the ground. 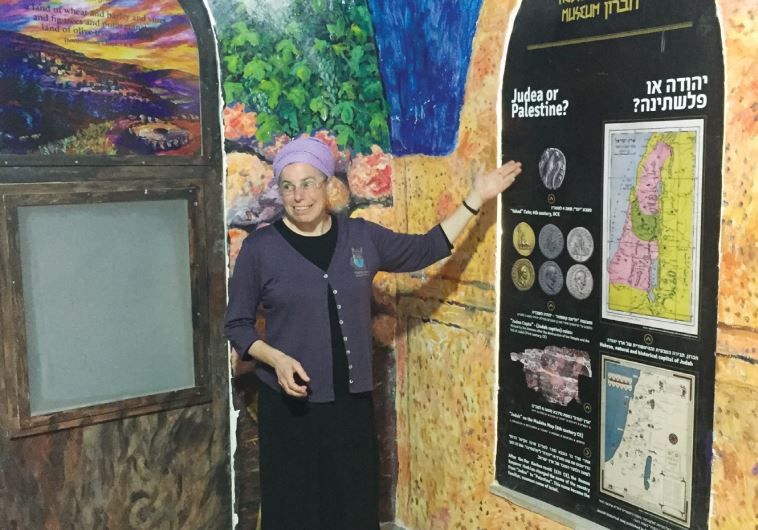 WHILE THE month of October races to a close, the weeks have been marred by terrorism. The murder of Eitam and Naama Henkin in the West Bank on October 1 and the stabbing death of Aharon Benita and Rabbi Nehemia Lavi in the Old City on October 3 – where Benita’s wife and two-year-old were also wounded – were shocking to Israelis.Palestinian and Arabic social media praised the attacks, the perpetrators were revered as heroes and propaganda and instructional videos were released promoting more violent attacks.Palestinians killed by Israeli forces during riots further inflamed tensions, allowing no end to a Sisyphean cycle of violence, as foreign media have categorized it. Many blamed Palestinians frustration and anger at the occupation boiling over.But others looked to the lessons of history as to what inspired the third intifada. Threats to the change of the status quo to al-Aksa Mosque – on the Temple Mount – visits and provocations by right-wing Israeli politicians, Jewish tours on the compound and restrictions of entrance to those of a certain age supported Palestinian leaders rhetoric that a threat to Islam’s third-holiest site was mounting.“We welcome every drop of blood spilled in Jerusalem. This is pure blood, clean blood, blood on its way to Allah,” Palestinian President Mahmoud Abbas said in a television interview on Palestinian TV on September 16. “... All of their steps, we will not allow them. All these divisions, al-Aksa is ours, and the [Church of the] Holy Sepulcher is ours, everything is ours, all ours. They [the Jews] have no right to desecrate them with their filthy feet and we won’t allow them to.”Despite repeated claims from Prime Minister Benjamin Netanyahu that the status quo is not in danger – the Palestinian street fumes.The word on everyone’s lips in Hebron seems to be 1929, the year of the brutal massacre of 67 Jews at the hands of an Arab mob, many of whom had personally known the Jewish residents they were killing. It has similarities with the events today because it stemmed from a dispute over the Temple Mount and al-Aksa compound. It also conjures up competing “narratives.” Muslims like to talk about the 19 Muslim families who saved the 300 Jews who survived the massacre.FOR SHLISSEL, the lessons of the Hebron pogrom of 1929 are part of her family history. Shlissel was named for her grandmother Tzipora, who survived the massacre along with her sister Leah.As tensions flared in Jerusalem over perceived threats to al-Aksa Mosque nearly 90 years ago, Tzipora and Leah barricaded themselves in Leah’s home – refusing an offer from the head of the community Eliezer Dan Slonim, to gather in his home with other members of the community.Slonim counted on his good relations with his Arab neighbors to protect himself, his family and his community from the mounting violence. By night’s end, Slonim and 23 other people would be brutally murdered.“My grandmother was standing by a window and Leah grabbed her hand to have her move away. At that moment Arabs threw a huge rock through the window and it landed right where my grandmother was standing before. This is our own personal miracle, it’s how I’m here today.”Shlissel, 50, is a tour guide in the Beit Hadassah museum in the small and central Jewish community in Hebron. An underground cavern of Arabic arches, the museum moves through five small rooms detailing the history, tragedy and triumph of the Jewish community in Hebron.The room dedicated to the atrocities of the 1929 pogrom displays the weapons used by the Arabs and photos of the carnage. A memorial with photos of the murdered is illuminated with a soft red light in the dark room. Jewish gravestones, destroyed earlier and used to pave roads, have been reclaimed as part of the memorial.“This was the big shock of Hebron. They thought they lived together, yet suddenly their friends, their neighbors, came to murder them. Eliezer Dan Slonim’s home was the worst site – 24 people were murdered there.”Shlissel is the daughter of Rabbi Shlomo Raanan, who was stabbed to death in his Hebron caravan in 1998 by an Arab man who had climbed in through the window. It was a defining moment in strengthening the resolve of the Jewish community in the city.Shlissel moved to Hebron with her husband and children a few years later in 2001.“The last story is what happened here this Shabbat. I went to the minyan at 8:00 a.m. and I met someone who came back from the early minyan, here, on this road. I said hello. I continued, he kept walking, then I heard shooting. I turned around I saw that he shot a terrorist who had come at him with a knife; it was just behind me. If he hadn’t been there, the terrorist would have come for me. This was such a miracle you cannot imagine...“I feel that it continues, all the time. They murdered my father with a knife and they almost murdered me.”Outside the museum, a bit of tear gas can be smelled in the air. Booms are heard in the distance; the Israeli army is clashing with youth somewhere nearby.But here, in this tranquil setting, with a young boy playing in a playground, it is quiet. Upstairs, an Israeli officer is briefing his soldiers about the situation.There is a dissonance. Quiet here, but armies of men to protect it.URI KARZEN is a jovial and smiling man. As the director-general of the Jewish community in Hebron, he says their situation is not much different than the rest of the country at the moment. 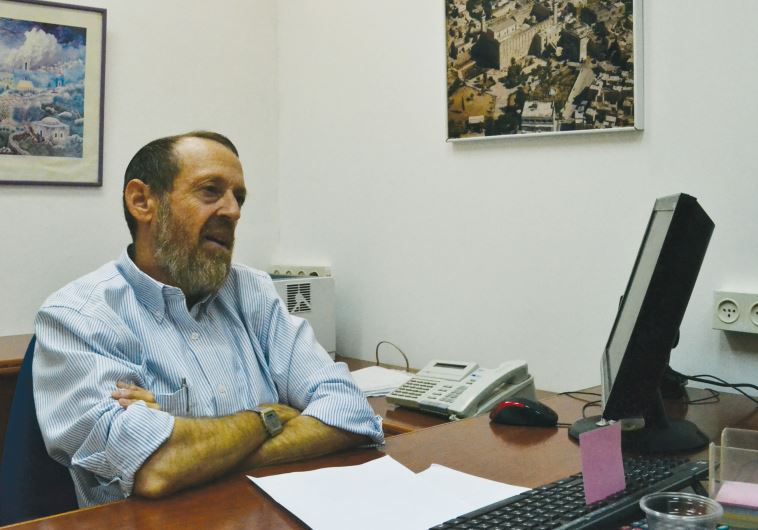 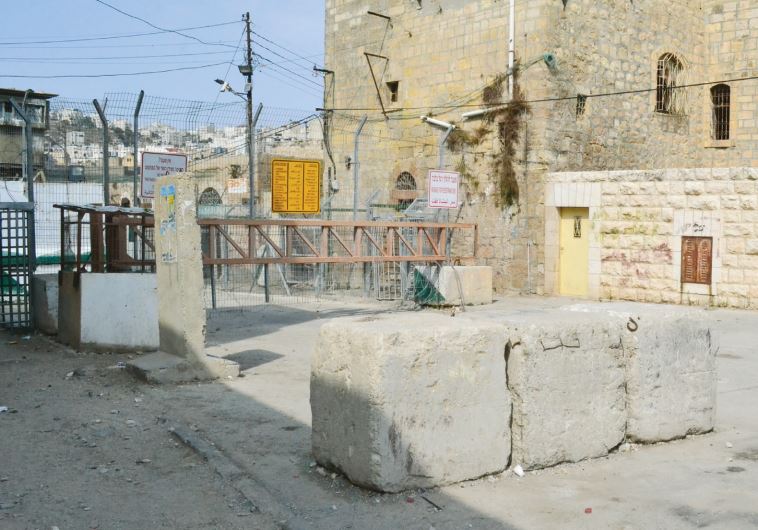 For Palestinians, it makes sense that they would see it this way – it could be them next. “Regular people at the checkpoint can be arrested for doing nothing, which is what happened to me last week.”Mohtaseb relates that he was leading a tour group and they were finishing up at the Ibrahimi Mosque (the Cave of the Patriarchs). When going in, the soldiers asked for him to hand over his ID – “it happens, they ask for your identity and you get it back on the way out” – but when he exited they detained him.They brought him to the local police station, accused him of throwing rocks, said that they had photographic evidence and that he had been in hiding for two days. Mohtaseb says they held him for five hours before a short interview, and then they let him go.“Of course I have anger but it’s under control. I’m not the only one, there are a lot of people who have this mentality. I consider myself with a gift from God that I can control myself despite this whole situation, and still present my people in a peaceful way.”He believes that Jews and Muslims can live together. “We don’t want to throw you into the sea,” he says. But Mohtaseb thinks the two-state solution is dead.For Lina, it is a depressing reality. She looks at the old dilapidating buildings falling into disrepair, the storefronts that were once a bustling street of business, closed since the second intifada.One sign says, improbably, “Turkish Bath.” Was there once a thriving bathhouse culture here? Lina doesn’t recall. Prevented from walking further on Shuhada Street, because many Palestinians are barred from certain areas bordering the Jewish community, Lina takes a roundabout route up by the Qurdoba School that overlooks Hebron. For an ancient city, site of the Jewish Patriarchs, it occurs now how improbable it is that its old city was built in a valley. To the south is a large Muslim cemetery. Here are buried the old families of Hebron, many of whom now have relatives in Jerusalem, to which they migrated in the early and mid-20th century.“The real intifada should be against the Palestinian Authority,” says Lina.“We need a new leader. The violence against Israeli settlers will lead nowhere. It doesn’t bring us rights and freedoms, just more checkpoints, more walls and more Israeli security forces.”