Back to the roots

Eco-Judaism reconnects the People of the Book to its ancient soil. 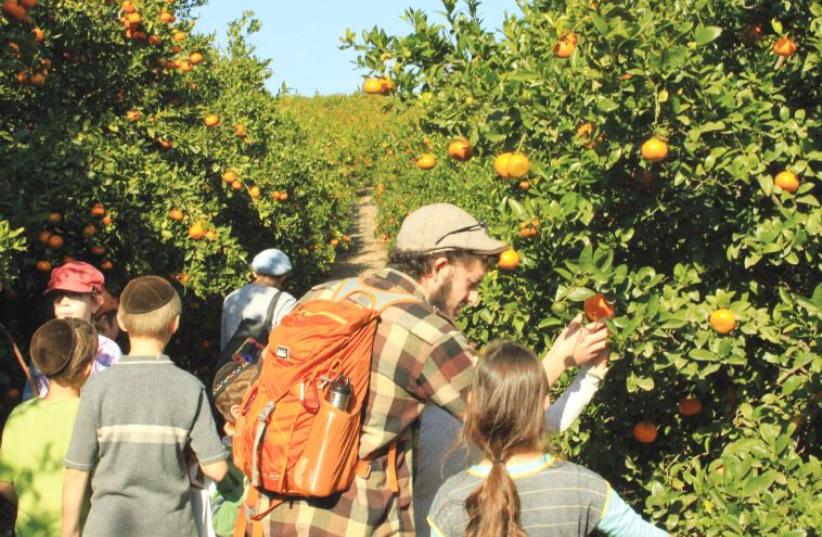 Benji Elson teaches kids about Judaism and ecology on a tour of fruit orchards
(photo credit: LEMOR SIDES)
Advertisement
Judaism, at its ancient roots, is an earth-based tradition. This may feel obvious when we are celebrating holidays like Succot, Passover and Shavuot, but in the day-to-day lives of most Jews, connection to the land is not strongly felt.There has been a resurgence recently of what can be called Eco-Judaism. It is a shift in consciousness to reconnect with our environment, with the land under our feet and with the Torah’s teachings on sustainability.“I realized that there is the written Torah, the oral Torah and the Torah of nature,” Marissa Nuckels, founder of The Homestead, explains. “In order to get the Torah of nature, you have to be in nature. The same way you have to learn to read a book, you have to learn to read nature. How does King David know what a gazelle is like when he describes it leaping over the mountains in Psalms? He has to know a gazelle; he has to be in nature.Our original job here [on earth] was to work and guard the Garden. It’s time to get back to that.”Eco-Judaism is developing a particularly strong presence in Jerusalem. The Homestead, which Nuckels and her husband, Roee Salem, will launch officially in the capital this Succot, is a prime example.After making aliya and moving to Tel Aviv in 2011, the couple started hosting Shabbat meals on their roof.What started out as a small group gathering quickly grew in size.“We created a home away from home as the community around us grew,” Nuckels recalls. “At the end of three years, we met our close circle of friends and things really took off. We had never met people who were so like-minded, and the power of collaboration was massive.”Nuckels and Salem began what is now known as Seaside Shabbat on Tel Aviv’s Frishman Beach, with a diverse crowd of over 100 people gathering on an average week.“It was like a song circle, and it felt so amazing,” Nuckels says. “It attracted people who would never go to synagogue, because there was a hippy vibe. Afterwards, everyone would come over for dinner to our house. We really did our best to give people the taste of Shabbat.” 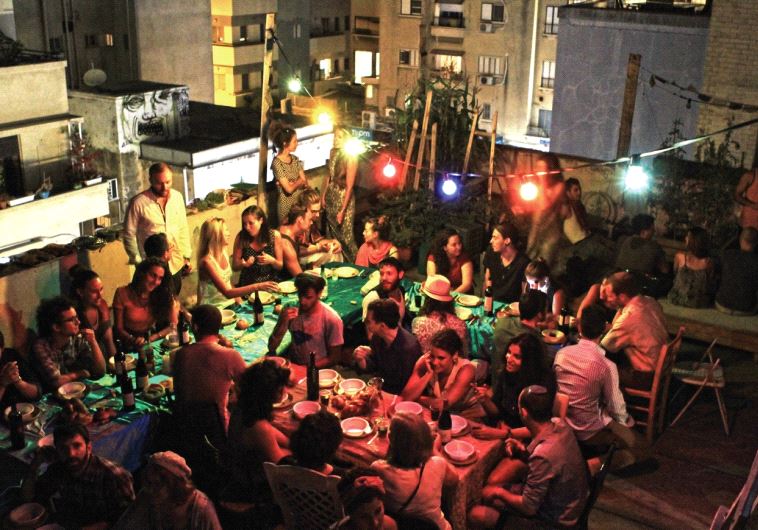 Shabbat dinner on the roof in Tel Aviv, following a seaside Kabbalat Shabbat event on Frishman Beach in the summer of 2014 (photo credit: ZAN MOSTOW)
The Seaside Kabbalat Shabbat, followed by a communal Shabbat dinner, became the impetus to launch The Homestead, part urban farm, part communal hosting space, part Eco-Judaism learning center.“You get these moments in life that are very unique and special where Hashem [God] gives you a little glimpse into what His dream for you is, what you could do here. Those seaside Shabbat events were moments like that for us. Having them created a huge sense of purpose,” she says.Last year, Nuckels applied to PresenTense LA’s Fellows program for social entrepreneurs with her idea for The Homestead. Then she and Salem began searching for the perfect location, which they found on Beersheba Street in the heart of Jerusalem’s Nahlaot neighborhood.The home-based community center they established also has an urban farm on the roof. Nuckels has been excitedly buying heirloom seeds online, which are seeds that have been saved and preserved for a variety of reasons: nutritional content, unusual colors and textures or excellent taste.The key to The Homestead’s rooftop is vertical farming.“That’s what makes The Homestead urban, because all urban locations have vertical space: walls and railings,” Nuckels expounds. “We needed to figure out a model for a planter that’s cheap and that will maximize what we can grow vertically; that’s the future of farming.“We are building a model that’s called a living wall.It’s basically a pocket-style planter, where the plants grow over until it just looks like a green wall. We actually have more square meters of railings than horizontal space, so we can grow much more, and this way, we don’t lose any space for guests, because a big pillar of The Homestead is hosting.”The Homestead will provide Jerusalem with a model of how to live a sustainable life in an average, urban space. It will implement a water catchment system, where the water used for laundry and from the sink will be caught and used again to irrigate the plants. It will also catch the rainwater.“It’s really about harnessing what we have,” Nuckels adds. “Obviously, we are going to recycle, but it’s not just an urban farm, or a space to host events for the community, or a place to have classes on Eco-Judaism; it’s a combination of all of the above. We are super green but also educational.”The Homestead will offer farm-to-table Shabbat and holiday meals, as well as rooftop Kabbalat Shabbat services and other ritual celebrations. The roof will also provide space for yoga classes and kabbalistic meditations.Although the official class list has not yet been finalized, the classroom inside will be used for DIY workshops on things like candle-making and herbalism, as well as classes such as eco-kashrut or conscious eating, and zero waste workshops.It is fitting that The Homestead will launch on Succot, since the main principle behind building the succa’s roof is to have more shade than sun, but to still have the ability to see the stars. The succa’s roof is thus a metaphor for Eco-Judaism, encapsulated: connection to nature through Jewish ritual.“Nature leaves us awestruck,” Nuckels states. “Even the most secular atheist will say that they feel something in nature. So we’re bringing nature to the city, and we want people to walk up to the roof and be in disbelief as to what is going on with these green walls just popping with stuff that most people have never seen, like golden beets and purple carrots.“We’re celebrating creation.” 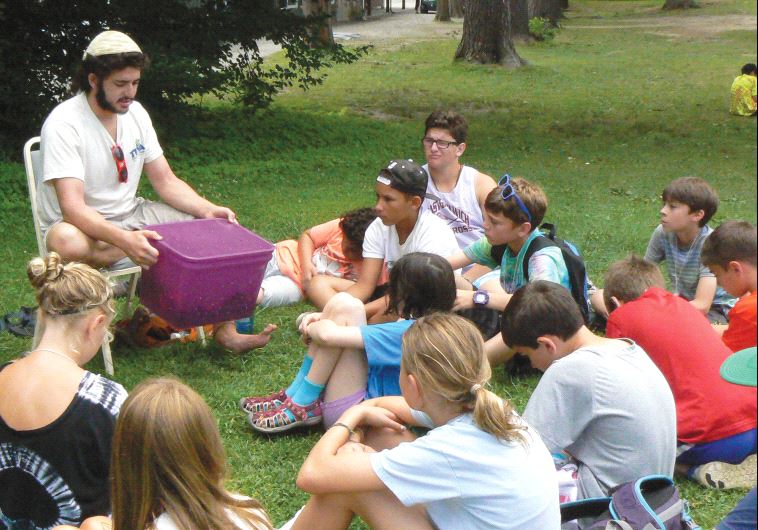 Elson explains the connection between compost and Judaism (photo credit: SONIA WILK)
YET ANOTHER example of Eco-Judaism’s manifestation in Israel is the Eco-Succa Competition, which was started by permaculture specialist and Food Integrated Gardens (FIG) director Paz Faigenbaum.The competition is in its sixth year and attracts succa designers from both Jerusalem and Tel Aviv. Faigenbaum encourages a modern interpretation and design of the ancient temporary dwelling, based on permaculture principles: green edibles, recycling, ethically sourced materials and innovative aesthetics. Contestants submit their eco-succa designs, and a winner from each city is chosen.For Faigenbaum, Eco-Judaism means staying in tune with the Jewish cycles and festivals and grounding them in nature.“It’s experiential Judaism, stripping it back and making it more simple,” Faigenbaum says. “It connects us to our ancient roots and also to the land. We’ve lost our connection in this regard, and we need to feel that the connection is bigger, more holistic; not that we’re separate from our surroundings, whether it’s from Hashem, our community, our nation or our environment.“We have the tree of life within ourselves: Our legs are the roots that go down, our trunk is the midsection of our bodies giving strength, and our faces are unique and extending to the sky. Whereas an actual tree is rooted in the ground, our spiritual roots are in heaven.It’s very much about the spiritual and the physical mirroring each other.”Faigenbaum, who has been running earth-based Judaism events in Israel for over seven years, focuses his work on permaculture. Permaculture is defined as the development of self-sufficient, sustainable ecosystems.It could be said that permaculture is to gardening as Eco-Judaism is to Jewish tradition: a model aimed at going back to the roots and fostering lasting connection.Through his FIG organization, Faigenbaum hosts permaculture design courses that empower healthy living through design, installation and education. The organization recently held a permaculture workshop with residents of the Protea Hills Retirement Village in Shoresh.Faigenbaum also devotes time, most recently in Safed, to designing rooftop wicking beds, which are a unique and increasingly popular way to grow vegetables because they are self-contained with built-in reservoirs that supply water from the bottom up. Moreover, FIG has an eco-Jewish component that explores the relationship between spirituality and permaculture through nature retreats and events around Jewish festivals.Since the end of August Jewish Eco Seminars, a subsidiary of the Interfaith Center for Sustainable Development, has been holding classes every Wednesday on the 18 core principles of Jewish ecology, as found in the Torah.“We’re trying to tie it to the weekly parsha also, to pull out the environmental teachings and incorporate that into the classes,” says Benji Elson, ICSD program coordinator. “Judaism started out as a tradition that was very connected to the land. Most of the mitzvot are about the land itself and can happen only here. There are a lot of teachings about sustainability.”Elson sees one of the main issues today as the concept of the megacity, the sprawling urban centers that have come to dominate many landscapes.“The Torah says that once you’ve set up the walls of the city, there needs to be 1,000 cubits of pasture for animals, and then 1,000 cubits of farmland, which is basically the concept of a green belt,” Elson says. “In urban planning, this is a big thing. How do you keep people connected to nature and all of its benefits from within a city? Once the city is set up, the Torah says that you can’t continue to expand; you have to make another one outside of this green belt. It’s really fascinating.”Perhaps the most well-known ecology teaching found in the Torah is shmita, the sabbatical year. Elson quotes Rabbi David Seidenberg as saying that the entire Torah and all of the laws found in it are only to be able to create a society that keeps shmita. 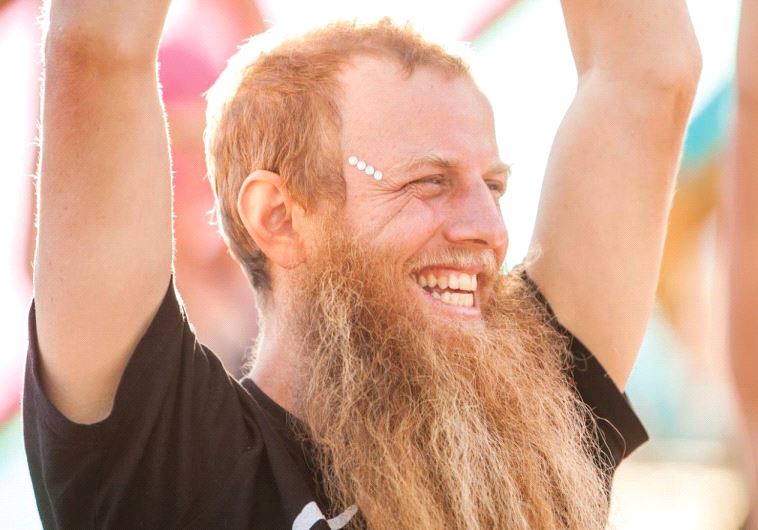 ‘It’s experiential Judaism, stripping it back and making it more simple’: Paz Faigenbaum (photo credit: FACEBOOK)
“There are only two reasons given in the Torah that Jews will be kicked out of the land: worshiping idols and not keeping shmita,” Elson states. “Shmita is very important. It’s a reorienting, or a checks-and-balances system every seven years. That’s sustainability.”ICSD also hosts eco tours in Israel, where groups are taken to various locations to be viewed through the lens of environmentalism. One of the tour stops is Mahaneh Yehuda, where participants learn where the vegetables come from, how the market has changed over time and where to buy organic produce.For Elson, Eco-Judaism represents more than a simple shift in consciousness or a nice, eco-friendly trend; it is the lifeline of the Jewish people.“I think that our future rests in us reawakening our connection to earth-based Judaism,” he says.For more information: www.thehomestead.life www.interfaithsustain.com www.foodingardens.com.au www. facebook.com/FIG-Food-Integrated-Gardens- 123856747717312/?pnref=story www.facebook.com/jewishecoseminars/?fref=ts