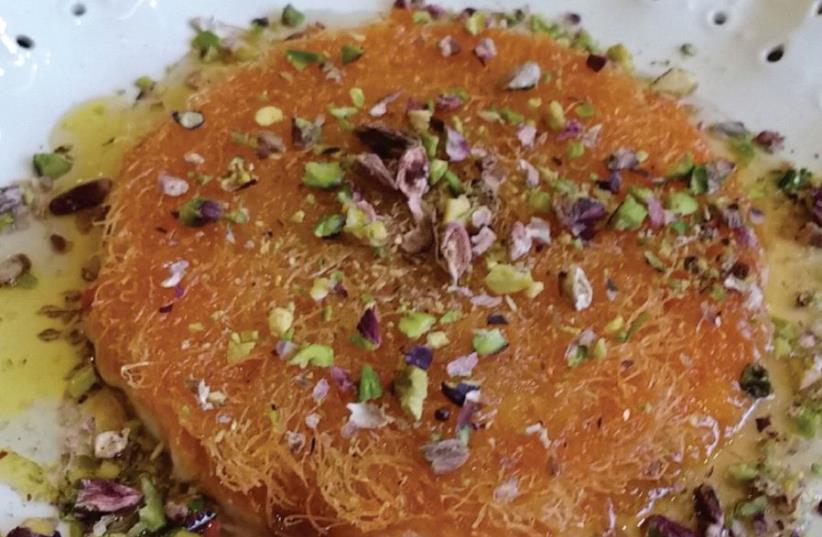 The knafeh offered at Basma Coffee in Jaffa
(photo credit: AVERY ROBINSON)
Advertisement
For the past few weeks, a small bakery in Tel Aviv has been going croissant crazy, and not in a Cronut fashion yet.Avner Gamliel, the young baker behind Baker’s Patisserie & Boulangerie, who knows nothing about Dominique Ansel or his signature Cronut, has been making nouveau croissants inspired by the diverse culinary traditions found in the region. Notably, his knafeh ma’afeh, a fusion of Arab knafeh and French croissants, is an unexpectedly brilliant fusion of pillowy, laminated pastry with crispy kadaif noodles (see below) and sweet-and-salty cheese.To understand this delicious, debatably decadent pastry, you need to understand a little bit about Israeli and Palestinian coffee cultures.They love black coffee, and it is the basis for most social interaction in the region.When you enter an Israeli or Palestinian home, local hospitality dictates you are to be offered coffee. Similarly, the workday here begins with a cup, or few, taken leisurely before emails are checked or work begins in earnest. But black coffee is often bitter, which can explain why it has such strong connections to dairy-filled pastries like knafeh and croissants.Prolific in Arab and Israeli bakeries, respectively, knafeh and croissants are two very distinct pastries that serve similar roles as digestifs.In brief, knafeh has been popular in the Levant for centuries. Palestinian knafeh is most commonly shredded, wiry semolina noodles (kadaif), caramelized with lots of butter and sugary syrup, cooked with some sort of salty cheese, then inverted and covered in more sugary syrup.The noodles may or may not be dyed a vibrant shade of orange, and the syrup varies from aromatic rosewater or orange blossom to the simplest of simple syrups.Croissants, however, are not indigenous to the Arab world. So how did Jewish-Israeli baking cultures, with such strong roots in the baking cultures of Central Europe (e.g., babka and rogelach), the Balkans (burekas) and Eastern Europe (poppy-seed cookies), enable the French croissant to become de rigueur in Israeli cafes? Croissants, born in Vienna and then popularized by the French, became prolific in Israel in the 1980s. Ever since, the humble croissant has become shorthand for coffee pastry in Israeli culture.Ordering a café uma’afeh – literally, “coffee and pastry” – almost exclusively refers to a viennoiserie (French term for most pastries made with croissant dough) and generally a deal on the price of your coffee + sweet. Whatever the reason, croissants are very popular in Israel, especially chocolate and almond varieties, which are much sweeter than the typical butter croissant.For decades, these two pastry cultures have thrived in the region. However, they did so independently of each other, even in multicultural cities like Jaffa, Haifa, Beirut and Jerusalem, where culinary fusion is commonplace. So when I saw this fusion pastry at Baker’s, I was beyond surprised, as though I were seeing a banh mi sandwich for the first time.Lest I digress too much, let’s get back to this harmonious cultural embrace.Gamliel designed the knafeh ma’afeh as a delicate balancing act between the sweet, buttery and crunchy knafeh with the simplicity of a tender, soft and moderately flaky croissant.At its core, given the dough, this is a croissant.After the ring of dough has risen in the proofing oven, Gamliel layers on his knafeh-inspired mascarpone cream.This sweet and salty blend cooks more evenly on this dough than the conventional goat or inexpensive cottage cheeses commonly used by knafeh bakers. When baked, the light mascarpone is magically able to retain its moisture, without making its underlying dough gummy or soggy.At this point, the cheese is given a wash of simple syrup and then given its kadaif crown, reminding us that this viennoiserie is not French, but rooted in this land. Then, into the hot oven it goes for the transformation and caramelization.A couple minutes later, the knafeh ma’afeh is dusted with powdered sugar – in lieu of simple syrup, which could destroy the structural integrity of the dough – and ready for the morning rush.Is this heavenly? Maybe. The harmonious blend of sweet and salty cheese, crunchy kadaif and tender croissant is a lot to handle for the unexpecting, but it is so worth it. Moreover, it is more substantial than a simple croissant, offering a perfectly sweet and savory balance to your morning cuppa.Warning, it does not inherently come with coffee. That decision, be it black coffee, latte or espresso, is up to you. (Personally, I’d recommend an Americano or café hafuch.) The writer is a Dorot Fellow. He researches culinary history and cultural foodways.