Breast cancer survivors not only go on with life but triumphantly take part in the Tel Aviv Marathon. 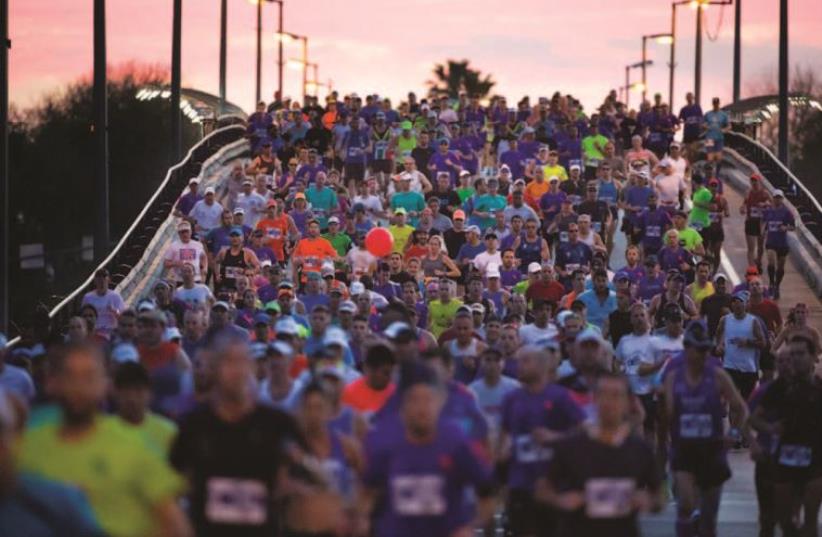 Marathon participants pound the Tel Aviv pavement.
(photo credit: RONEN TOPELBERG)
Advertisement
For a number of Israeli women who have survived breast cancer, crossing the finish line in the 2016 Tel Aviv Samsung Marathon on February 26 poses one more hurdle to overcome on their path of life.Running a marathon is undoubtedly a challenge. And, according to two inspiring and resilient women who spoke to Metro this week, running such a race after having battled breast cancer is not only a challenge but also a catharsis.Ra’anana resident Edith Saban, 46, is a veteran athlete who returned to her usual routine of running a mere month after undergoing multiple surgeries related to breast cancer. 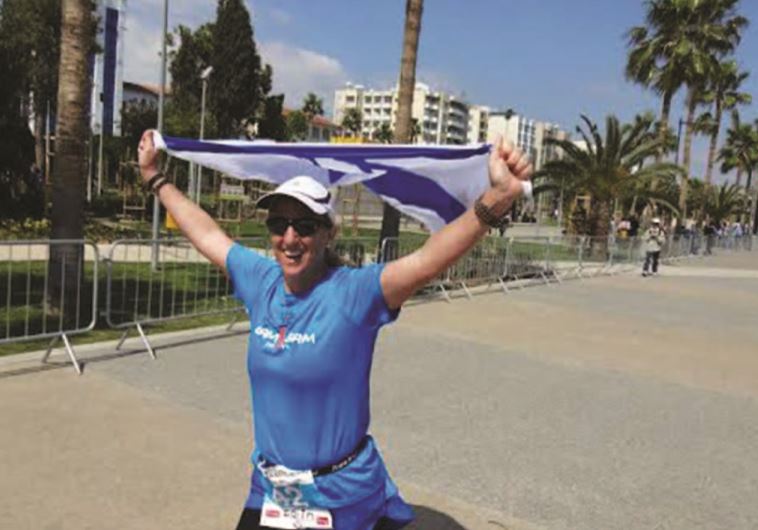 This year’s marathon in Tel Aviv will be the fifth overall, and the second in the city, for the sprightly Argentina native and mother of three who defeated cancer a year and a half ago.“Those who know me know that I’ve always been a runner – while pregnant, with a baby, without a baby, with cancer, without cancer. I run because it makes me feel good,” she asserts.Saban, who works as a sport therapist for children, explains that for her, athletics were vital in overcoming feeling victimized by the disease.“Running is good for the body and for the soul,” she says. “It’s true that when you’re battling cancer, you feel very weak and it’s hard to train. But [running] gives you strength and joy and a sense of well-being.”She recounts how during one period, when she was hospitalized for 10 days, it was a nightmare for her not be able to go running – so she took walks around the hospital.“Even when I was in the hospital, I didn’t wear hospital gowns,” she recalls. “I wore my athletic shirts and running shoes. I didn’t want to feel sick.”Saban participated in her first Tel Aviv marathon on her birthday in 2012, finishing the 42-kilometer race at age 42, minutes before turning 43.In recent years she has also participated in a marathon in Limassol, Cyprus, and the Jerusalem Marathon. And in March 2015, six months after undergoing a full mastectomy and another operation, she ran in the Vienna City Marathon in Austria.She started training for the race about a month after undergoing two surgeries to extract the cancer.After being diagnosed, Saban decided to register for the Vienna race without knowing whether she would have to undergo radiation treatment or chemotherapy in her battle with breast cancer. She says the prospect of the race gave her encouragement to emerge from the ordeal even stronger and “overcome it like a hurdle.”“I didn’t think it was something that would stop my life, but rather another hardship that had to be overcome,” she says of the diagnosis.“Every hardship – cancer was also a hardship – has to be overcome, and it isn’t something that puts life to a halt, it’s just another pothole in the path that has to be overcome,” she underlines.While in the past Saban has checked in with the medical staff that treated her after finishing races, her doctors have applauded her exercise routine and told her that it helped in her recovery process.Saban notes that running a marathon is not an easy task and requires months of preparation.Along with being a vegan, her training regimen for the Tel Aviv marathon includes five or six workouts a week. She combines distance running with strength training, along with some swimming, biking and Pilates. She says that some days she wakes up at 4 a.m. in order to run at 5 a.m. and get her children off to school by 6:30.“It’s somewhat like pregnancy, in the sense that there are several months to prepare for it” before the big day, she says.To deal with the difficult physical and mental phases of completing a 42.195-kilometer marathon, Saban reminds herself of a runner’s phrase: “The first 30 kilometers of a marathon are run with the legs; the next 10 kilometers are run with the head; the nearly last two kilometers are run with the heart; and the final 195 meters are run with a big smile on the face.”Saban credits her local running group in Ra’anana, Gam v’Gam Gonen Runner, for providing her with moral support in her past marathon experience and the upcoming one. Despite having the flu in the past month and training at half force, Saban hopes to finish the marathon in good condition.The marathon in Tel Aviv this year holds further significance for Saban, as it falls on the birthday of her father, who died when she was 18. In commemoration of the day, those of her children who are able will run alongside their mother for part of the race.More than 40,000 people are expected to participate in the race day events, which include six courses of varying lengths.Along with the full 42-kilometer marathon, there will be a 21-kilometer half marathon, a 10-kilometer race, a five-kilometer route, a 42-km. hand-cycle race for people with disabilities, and a children’s mini-marathon. 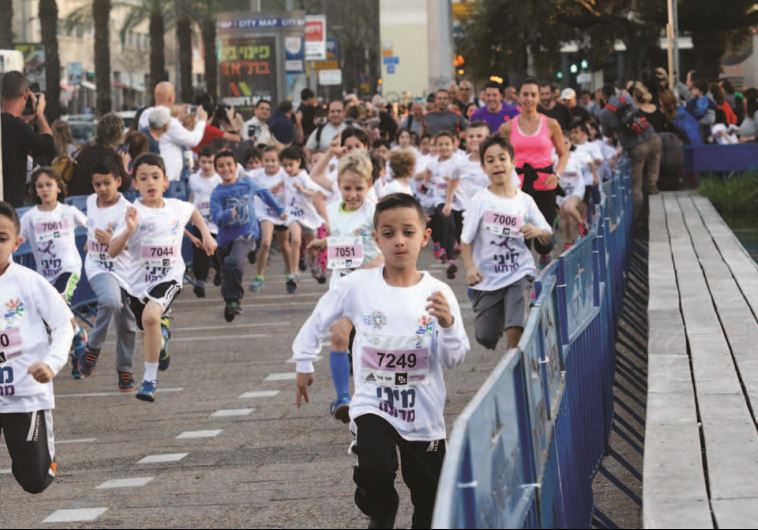 One participant set to run the 10-kilometer race is Rachel Shukrun, a 56-year-old mother of three and grandmother of seven.Shukrun ran her first marathon in Tel Aviv two years ago. Around the same time, a lump was discovered in her breast during a mammogram screening.Surgeons removed the cancerous mass in a lumpectomy, but after further pathological examinations and an MRI test found that the whole breast was infected with cancerous cells, doctors recommended she undergo a full mastectomy. In July 2014, Shukrun decided to go through with the procedure, followed by reconstructive surgery using muscle tissue from her back.Shukrun, who has long been physically active, was determined to return to running shortly after her operations. Last February she ran the Tel Aviv race, admitting that it was very difficult to bounce back. For the most part, she doesn’t feel pain in her back anymore. However, recovery has been an arduous process.“Even now I don’t feel back to my full self. I used to be able to run 10 kilometers easily. But ever since the surgery, my body betrays me,” she notes. “But I’m not giving up.”This year, she is planning to travel from her home in Tirat Carmel area to run in her third race in Tel Aviv.Shukrun will run with a message urging all women to do annual breast check-ups.“[The cancer] was detected and it happened, but I had always told myself it wouldn’t occur,” she says, adding that she hopes other women will learn from her experience. “An annual check-up can save a life.”According to the Israel Cancer Association, approximately 4,500 women in Israel are diagnosed with breast cancer every year.As part of her rehabilitation process, Shukrun visits an oncologist every six months and takes immunotherapy drugs every day, along with routine annual check-ups.“The body is like a machine. You can fix it, but it doesn’t come out like new. However, I try to challenge myself and do thing that people say I can’t do,” Shukrun asserts. “I won’t let this [cancer] beat me.”In addition to working at UMI, Shukrun trains four to five times a week, varying the running with spinning, strength training, Pilates and yoga. As a personal goal this year, she aims to finish the marathon in an hour or in less time than she did last year.“I do what I can. I do what’s good for me. I’m trying to get back to myself, and it’s much better than it was after the surgeries. So, little by little, my body is recuperating,” she says.