After 'selling Egypt to Saudi Arabia', Sisi clashes with Sudan over disputed territory

The Sudanese Foreign Ministry issued a statement affirming that Sudan should receive its right to sovereignty over the Hala'ib Triangle, contested by both Egypt and Sudan. 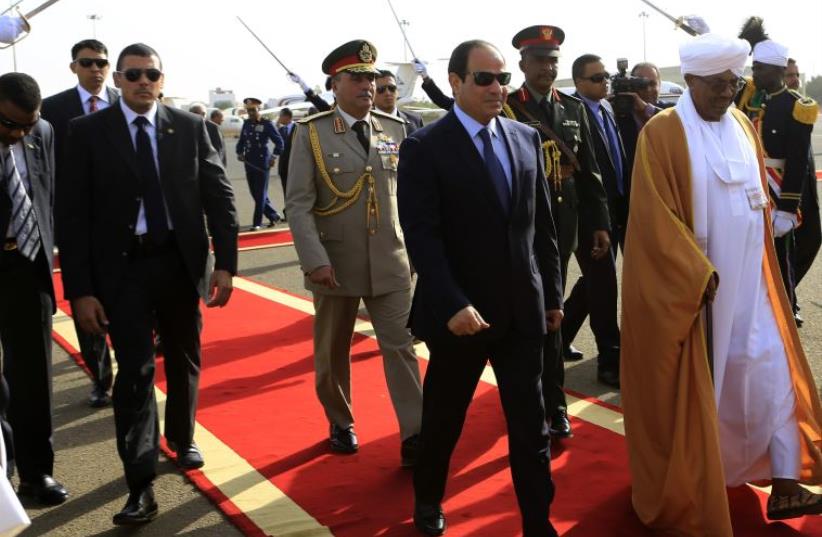 Sudan's President Bashir welcomes Egypt's President Sisi in Khartoum
(photo credit: REUTERS)
Advertisement
Shortly after Egypt handed over two Red Sea islands to Saudi Arabia in a controversial agreement, it is currently facing another territorial dispute, this time with its southern neighbor, Sudan.On Sunday, the Sudanese Foreign Ministry issued a statement about the Red Sea islands deal, affirming that following this agreement, Sudan should receive its right to sovereignty over the Hala'ib and Shalateen areas.Located in the Hala'ib Triangle in the south of Egypt, the two port cities have been contested by both Egypt and Sudan since Sudan gained independence from joint British-Egyptian rule in 1956. In the 1899 border demarcation agreement between Egypt and Sudan, supervised by the UK, Hala'ib and Shalateen were included within Egypt's territory. However, in 1902, the British Empire decided to hand over the two cities to Sudan, which was governed by Egypt at the time.After declaring its independence in 1956, Sudan officially imposed its sovereignty over the cities by including them within its electoral districts, which deeply enraged Egypt. However, since 1990, the Halai'b Triangle is under Egypt's control after it issued a decision to annex it.The diplomatic clashes between the states are not unprecedented, and have repeated each and every year since 1958, when Sudan first appealed to the UN Security Council to demand sovereignty over the two cities.
However, it appears that this time the Saudi-Egyptian deal has made tensions between the states heat up.
Sudan called on Egypt to negotiate over Hala'ib and Shalateen, or solve the dispute in the International Court of Arbitration, stating that it holds historical documents proving that it owns the territory.However, Egypt unequivocally refused to renounce its sovereignty over the Hala'ib Triangle. A statement issued on Wednesday by Egypt's Foreign Ministry compared the Egyptian-Sudanese dispute to the Egyptian-Saudi dispute over Tiran and Sanafir, the two Red Sea islands. Egypt called on Sudan to imitate it, claiming that just like it handed over the islands to the Saudi Kingdom after they were under Egyptian administration for many years, so should Sudan, which governed the islands temporarily until 1990, return them to Egypt.The Egyptian-Sudanese territorial dispute, similar to the Egyptian-Saudi dispute, became a tool used by Egyptians to lash out at President Abdel Fatah al-Sisi, presenting him as a fragile president ready to forego Egypt's territory, unlike "strong" previous presidents like Mohammad Morsi and Hosni Mubarak.In the past few days, Egyptian activists have distributed on social media networks a video from a meeting of Mubarak with Sudan's President Omar al-Bashir. Mubarak is documented telling Bashri: "There is no such thing called 'renouncing territory'. Shalateen and Hala'ib are Egyptian land.”