Saudi Arabia has already cut $3 billion in military aid to Lebanon after the Lebanese government failed to condemn an attack on the Saudi embassy in Tehran in January. 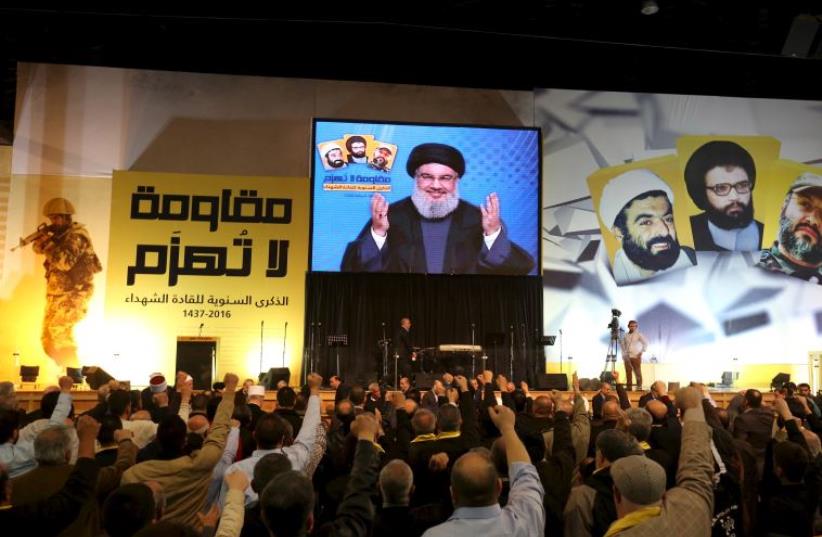 Lebanon's Hezbollah leader Sayyed Hassan Nasrallah addresses his supporters through a giant screen during a rally commemorating the annual Hezbollah Martyrs' Leader Day in Beirut's southern suburbs, Lebanon February 16, 2016
(photo credit: REUTERS)
Advertisement
The Saudi-owned television news channel Al Arabiya has shut its offices in Lebanon and dismissed 27 employees, two of its journalists said on Friday, in a sudden move that comes amid political tensions between Riyadh and Beirut.
Saudi Arabia has already cut $3 billion in military aid to Lebanon after the Lebanese government failed to condemn an attack on the Saudi embassy in Tehran in January.
The Sunni Gulf monarchy interpreted Lebanon's lack of public solidarity as a sign that it had become beholden to the Lebanese Shi'ite group Hezbollah, which is backed by Saudi Arabia's main regional ally Iran.
"We were informed that the offices have been shut and that 27 employees have been fired," one Al Arabiya journalist said.
A statement from the channel confirmed that its Beirut office had been shut, describing the move as a restructuring brought about by "challenges on the ground" and citing its concern for the safety of its employees.
Lebanon's Minister of Information Ramzi Greige dismissed the suggestion of security concerns, however.
"Of course there are no security grounds for closing the Al Arabiya office in Beirut. There may be political reasons for taking this step, but I don't know until I seek clarification from them," Greige told Reuters.
Al Arabiya, one of the main Arabic language broadcasters in the Middle East, is part of the Saudi-owned Middle East Broadcasting Center (MBC).