The Shin Bet and IDF have prepared for possibility that ISIS-linked terrorists could target planes over Israeli airports near Egyptian border. 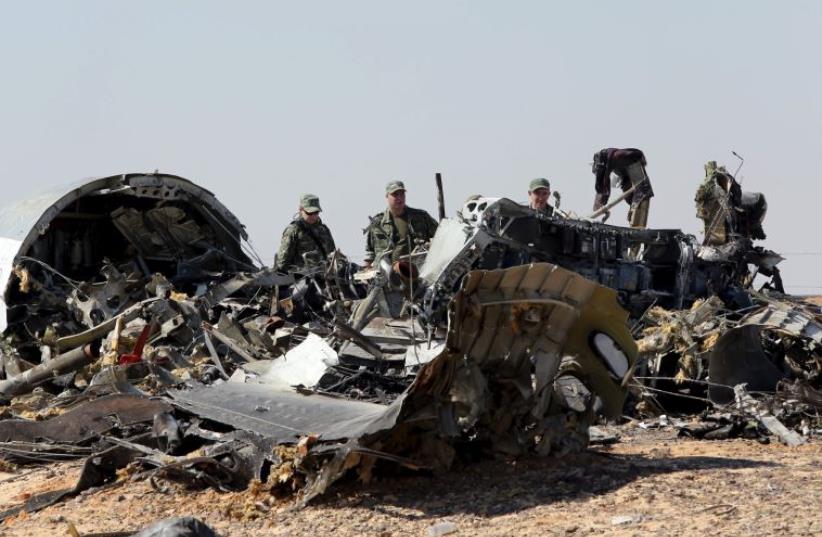 Russian airliner at its crash site at the Hassana area in Arish city, north Egypt
(photo credit: REUTERS)
Advertisement
The conflicting reports from senior Russian officials about the circumstances behind Saturday’s crash of an Airbus A-321 in Sinai, in which 224 passengers and crew were killed, only serve to increase the spread of rumors and conspiracy theories. In actuality, nobody yet knows what caused the plane to go down.
Russian airliner with 224 aboard crashes in Egypt"s Sinai
A senior official from the Russian airline that operated the plane, Kogalymavia, claimed at a press conference in Moscow on Monday that only “an external force” could have caused the plane to blow apart in the air, fueling speculation among those who believe that the crash was caused by an act of terror. However, the head of Russia’s State Civil Aviation Authority, Alexander Neradko, said claims of external forces causing the crash “are not based on facts.”According to Neradko, it is too soon to determine the cause of the tragedy.Only a thorough probe of the plane’s fragments, and analysis of the so-called black box – the device that records flight data – can help Russian and Egyptian aviation investigators come to a clear conclusion.
Sinai plane crash: Did ISIS do it?
The plane departed from Sharm e-Sheikh – a popular tourist destination visited by some 1.7 million Russians a year – and climbed to an altitude of approximately 10 kilometers (32,000 feet), which is standard for a passenger flight. But, within 22 seconds, it suddenly dropped 6,500 feet before blowing apart in mid-air. From the debris of the plane, which was scattered over a 12-kilometer radius, it emerged that the tail section disconnected from the body of the plane in mid-air.Even though an incident in which a plane breaks-up in the middle of a flight is quite rare, there is a high probability, according to aviation experts, that there was a technical or mechanical failure caused by flawed maintenance procedures.This particular plane had a long history of such problems. In 2001, the plane’s tail section was badly damaged when it struck the tarmac while landing at the Cairo airport. Another possibility is human error – a mistake or series of mistakes made by the pilots.In the instance of a crash in which the circumstances are not immediately clear, the tendency is to blame an act of terrorism or sabotage. Furthermore, in the case at hand, a murderous and cruel terrorist organization has taken up residence in the area of the crash – “the Sinai Province,” which has pledged allegiance to Islamic State. The terrorist group, which like its mother organization has risen through the use of digital media and psychological warfare, was quick to claim responsibility for the crash. In a statement released by the group a few hours after the crash, it claimed that it downed the plane as revenge for Russia’s acts of murder against Muslims – meaning Moscow’s involvement in the civil war in Syria.However, Sinai Province, like Islamic State, is no stranger to propaganda ploys and has previously issued false claims of responsibility for acts it did not commit.Chances are that the plane was not shot down by missiles fired by Sinai Province terrorists. They succeeded in shooting down an Egyptian helicopter in the past, but it was flying at a low altitude. Al-Qaida terrorists also fired a missile – likely a Russian SA-7 (Strela) shoulder-launched anti-aircraft missile – at an Arkia plane flying from Mombasa, Kenya 13 years ago, and missed. The missile was fired while the plane was taking off and at a relatively low altitude.The range of the advanced missile reaches 4.5 kilometers. Therefore, even if the Sinai Province possessed such missiles – and the working assumption must be that they do have them – if the plane blew apart at an altitude of eight kilometers, it was outside the missile’s range.If, indeed, the crash was caused by “an external force,” as the airline representative claimed, which is not a technical failure, and again it must be stressed that this is solely speculation, the more likely possibility is that a bomb was placed on Flight 9268. Such incidents have happened before. One instance, in particular, comes to mind – the tragedy of Pan Am Flight 103 from Frankfurt to New York on Christmas 1988. A bomb was placed on the flight by Libyan intelligence agents, which caused it to explode above Lockerbie, Scotland, killing 259 passengers and crew members.Egyptian security forces are well aware of the danger posed by terrorists, and airport security checks at Egyptian airports are stringent. However, no security apparatus is 100 percent immune to terrorist breaches.In any event, at this stage, conclusions cannot be drawn. And, even if, eventually, it emerges that this was an act of terrorism and sabotage, there are no major implications for Israel.The Shin Bet (Israel Security Agency) is responsible for securing flights to and from Israel, and it, as well as the IDF, has for a number of years taken into account that Sinai Province terrorists could try to target planes coming from and going to the Israeli airports near the Egyptian border – Eilat and Uvda. The necessary precautions against such attempts have been taken. Furthermore, some Israeli planes recently have been outfitted with anti-missile systems.As for security checks on the ground prior to flights, Israel is considered the most meticulous in the world (sometimes at the expense of passenger comfort, the right to privacy and racial or religious discrimination).