Gaza's 'worst zoo in the world' to close

Along with the 16 other animals still residing at the Khan Younis Zoo, Laziz the tiger is set to leave his desolate home in the coming days. 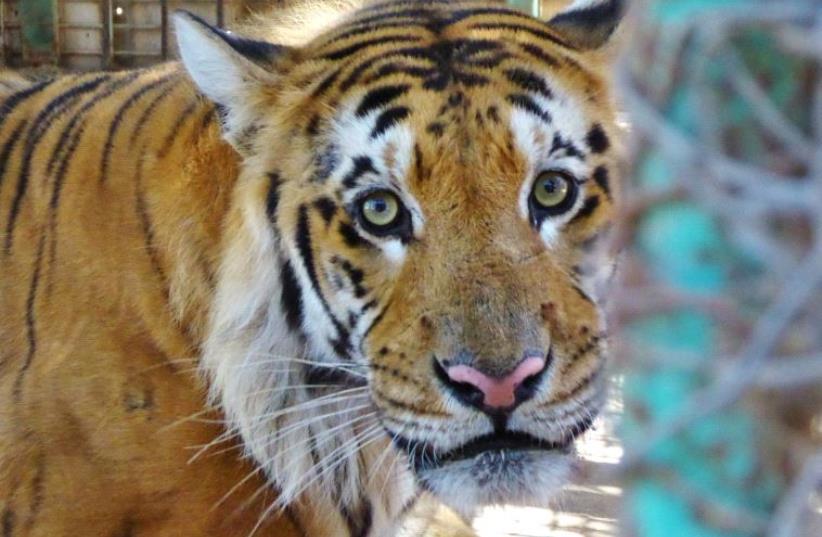 Laziz the tiger at the Khan Yunis Zoo
(photo credit: FOUR PAWS)
Advertisement
The sole surviving tiger in a southern Gazan cage will soon make a cross-continental journey from the Middle East to South Africa, as Four Paws, an international animal rights organization, rushes to close the “worst zoo in the world.”Along with the 16 other animals still residing at the Khan Yunis Zoo, “Laziz,” the tiger, is set to leave his desolate home in the coming days, the Vienna- based Four Paws group announced on Thursday. The operation follows a long series of negotiations with the various relevant authorities, and will involve several veterinarians and a logistical support team, the organization said.“The closure of the zoo means a new life for the tiger and the other animals, which up to now have had to waste their lives away in desolate cages, suffering from a lack of food and medical care,” said Dr. Amir Khalil, who is heading the closure operation.Laziz will be heading to the Big Cat Sanctuary in South Africa, while the tortoises, porcupines, the emu and other animals will be going to Jordan’s New Hope Center – part of the Al Ma’wa for Nature and Wildlife sanctuary, run jointly by Four Paws and the Princess Alia Foundation.Because the New Hope Center lacks an enclosure for a big cat, Laziz will make his new home with more than 100 other big cats at the South African facility, the organization said. After a familiarization period in an adaptation enclosure, he will then move to a one-hectare space (2.47 acres) with grass, trees and a pond.Earlier this year, the Khan Yunis Zoo began facing financial difficulties and could no longer adequately care for its animals, according to Four Paws. In order to attract more visitors, the zoo’s owner took to exhibiting mummified cadavers of animals, which have since been removed, the group said. In February, Four Paws responded to the owner’s call for help with urgent food supplies, and in June, the organization came to assess the situation on the ground and bring medical supplies.In response to a query from The Jerusalem Post, a statement from Four Paws said that the group eventually received a green light for its mission following talks with a number of parties, including Israeli authorities, the owner of the zoo and the Princess Alia Foundation.“The largest challenge was to find a really sustainable solution as many parties are involved in the case and had different opinions on the topic,” the statement added.After the animals are rescued, those that do not require anesthesia or further checkups will be directly loaded into their crates, while those that do need anesthesia will receive antidotes before beginning to travel, to prevent injuries during the journey, the group explained. While most animals will travel to Jordan by car, Laziz the tiger will travel by car to the airport, fly to Johannesburg and then continue by car to his final destination.“During the whole journey the accompanying vets will regularly monitor all animals carefully,” the statement said.“The animals will be checked by experienced vets, who have worked with wild animals and accompanied transfers many times. With all necessary precautions provided, the risk for the animals and surrounding humans is kept at the smallest possible level.”At the beginning of August, Four Paws launched a fund-raising campaign called the “Lemon Challenge.” The group asked supporters to film themselves biting a lemon, post the video on social media with the hashtag #2sour2ignore and ask friends to do the same – giving the option either to bite the lemon themselves or make a donation to Four Paws instead. The funds, according to the campaign, would help transfer the 16 animals out of the Khan Yunis Zoo.The Lemon Challenge campaign is still ongoing, and has thus far raised €3,737 out of the goal of €40,000.“The hardest part is still ahead of us,” Khalil said. “Just before we reach our goal, we need an extra boost of support from every single person. To actually get the animals out of the worst zoo in the world and transfer them to their new homes, every bite of the lemon and every donation helps.”