Is Turkey backing a former al-Qaeda affiliate in Syria?

BEHIND THE LINES: Turkey appears to be cooperating with Hayat Tahrir al Sham, a designated terror group, in north west Syria.

Recent developments in northwest Syria have showcased the ambiguous relations between the Turkish authorities and one of Syria’s largest Sunni jihadi groups. Syria observers have long noted the tacit cooperation between Ankara and the Hayat Tahrir al-Sham group (HTS; formerly known as Jabhat al-Nusra and formerly the official franchise of the al Qaeda network in Syria).

The latest events, however, suggest an increased level of cooperation. The reasons behind this increased closeness remain in dispute. Closer observation reveals the extremely dysfunctional nature of life in Turkish-controlled northwest Syria, where Islamist militias compete for power and control, Turkish regular forces act as the ultimate arbiter, and Ankara’s ultimate agenda remains unclear.

The latest events saw HTS moving in force into Afrin city in northwest Syria, before partially withdrawing, apparently at Turkish insistence. Since 2018, when Turkish forces destroyed the Kurdish Afrin canton, the city and its surrounding area have been controlled by Turkey in cooperation with the “Syrian National Army.”

The latter is an amalgamation of various Sunni Islamist militias into a structure established by Ankara. The SNA officially answers to the “Syrian Interim Government.” Based in Azaz in northwest Syria, this authority was formed by the remnants of the Syrian opposition leadership.

The Syrian Interim Government and the Syrian National Army are what remain of the forces that raised the banner of revolt against the Assad regime 10 years ago. Confined to a poverty-stricken corner of Syria, largely ignored by the world, they exist because Turkey, for its own reasons, prefers to keep this area out of the hands of the Kurdish de facto authority further east.

While the SNA is a notionally united organization, in practice the various Turkish-supported Islamist militias maintain their separate structures and engage in feuding with one another over control of resources. 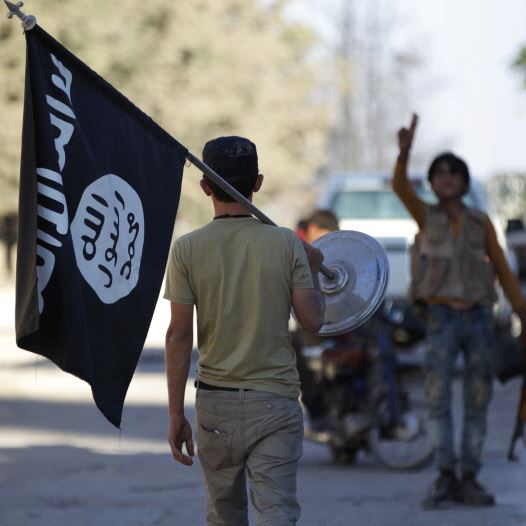 A rebel fighter takes away a flag that belonged to Islamic State militants in Akhtarin village, after rebel fighters advanced in the area, in northern Aleppo Governorate, Syria, October 7, 2016 (credit: REUTERS)

But these organizations do not administer the entirety of the area of de facto Turkish control in northwest Syria. To their south, in Idlib Province, HTS maintains its own area of control. Here, the so-called “Syrian Salvation Government” rules, in accordance with the strictest interpretations of Islamic Sharia law.

HTS is designated as a terrorist organization by both the US and the government of Turkey. Yet ultimately it is able to rule this area because of the Turkish military presence, without which it is clear that the Assad regime would move in.

These two areas, the SNA and HTS zones of control, are not tiny, remote enclaves. Around 2.6 million people are estimated to live in the HTS-controlled area, while 2.3 million are residents in the area controlled by the SNA.

So what just happened?

The current series of events began on October 7, with the killing of a local activist, Muhammad Abdul Latif, in the SNA-controlled city of al-Bab. Latif and his pregnant wife were murdered by gunmen. The SNA-affiliated 3rd Legion, which was in control of the area, concluded that a rival militia, al-Hamza Division, was responsible for the killings.

The 3rd Legion raided a number of facilities maintained by the Hamza Division in al-Bab and Afrin city. Clashes between the two forces began.

HTS, which maintains relations with the Hamza Division and a number of other SNA-affiliated groups, intervened in the fighting on behalf of Hamza, and sent fighters and tanks into Afrin to assist them. The city rapidly fell under the control of HTS. HTS and its allies also took the town of Jenderes and a number of surrounding villages.

The move by HTS reflected a long-standing ambition on the part of the organization to unite the remaining rebel/Turkish-controlled enclaves under its own rule. Aymenn Jawad al-Tamimi, a UK-based researcher who closely monitors Syrian jihadi groups, noted that HTS leader Abu Muhammad al-Jolani has hinted at this desire in recent speeches.

Tamimi also noted that prominent HTS Twitter accounts following the taking of Afrin began to express support for this goal. One such account began to use the hashtag “one liberated area.” Abu Mariya al-Qahtani of HTS, according to Tamimi, wrote on October 13 that the taking of Afrin may “be a beginning for a new stage and a new dawn, in which people will live in security for their religion, lives, families and wealth.”

Taher al-Omar, a journalist close to HTS, wrote on his Telegram channel on October 15 that efforts were underway to form a single, unified military council and a single, unified civilian authority (with the implication that these would be under HTS control.)

Following the fall of Afrin, opponents of HTS, however, began to assert a different version of events, claiming that Turkey’s apparent acquiescence to the loss by its clients of Afrin reflected an emergent strategy with broader implications

According to this view, which was repeated by analysts in a number of regional media outlets, Turkey’s true intention is to negotiate the return of the Assad regime to northwest Syria as part of a larger effort to normalize Ankara’s relations with Damascus, and draw a line under the period of civil war in Syria.

To facilitate this, according to this view, Turkey wants to allow HTS to consolidate its control, after which the entire area will be returned to the regime.

A source close to the (Turkish-backed) Syrian opposition, in conversation with this author, dismissed this view, however. The source noted correctly that Turkey over the weekend deployed troops in Afrin in order to facilitate the withdrawal of HTS from this area. Turkey also appears to have prevented HTS from moving on to conquer Azaz, where the Turkish-supported Syrian Interim Government is based.

AS OF now, HTS forces have indeed redeployed from Afrin. Still, it would be wrong to entirely dismiss the assertions of tacit cooperation between Ankara and HTS. The rapid redeployment of HTS from Afrin may well have been in response to US pressure.

A statement from the US Embassy on Syria’s active Twitter account called on HTS to withdraw “immediately” from Afrin, describing the US as “alarmed” by the latest developments.

Ankara has thousands of troops in this area and controls the airspace. As such, it is clear that Turkey could have prevented the HTS incursion should it have wished to do so. It did not.

Furthermore, a Turkish-brokered agreement announced on October 15, between HTS and the 3rd Legion, stipulated the establishment of a unified military administration under the supervision of HTS.

The fate of the agreement now appears uncertain following renewed clashes between the sides. But the fact that Turkey made no effort to prevent HTS’s initial advance, and appeared willing to broker an agreement allowing it an entrance into the administration of SNA-controlled areas, would suggest that the claims of collusion between these two players have some merit.

This does not mean that Turkey has a plan to back HTS and then hand the area over to Assad. It is more likely that Ankara is simply aware of HTS’s relative cohesion and strength when compared to the corrupt, divided and squabbling factions that comprise the SNA.

Still, the events of the last weeks in the Afrin area demonstrate the extent to which the Turkish government cooperates with Sunni jihadi factions as a matter of policy, including organizations that Ankara itself designates as terrorists.

This has implications beyond the blighted corner of northwest Syria in which Turkey and HTS hold sway. These events should be carefully studied by all countries for whom a correct understanding of the nature, motivations and behavior of the current Turkish government is a matter of importance.