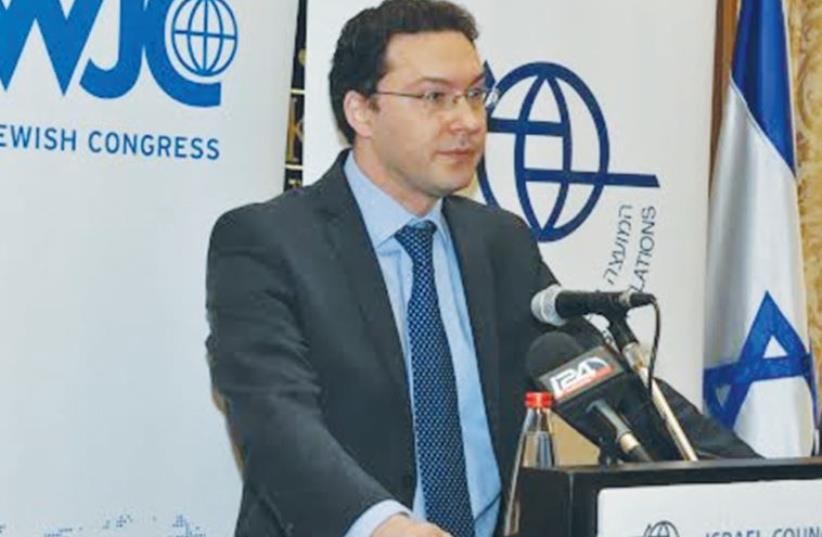 BULGARIAN FOREIGN MINISTER Daniel Mitov addresses the Israel Council on Foreign Relations in Jerusalem on Friday.
(photo credit: ANDRAS LACKO)
Advertisement
Syrian President Bashar Assad opposes efforts to stop the turmoil in Syria and wants to undermine the negotiation process, Bulgarian Foreign Minister Daniel Mitov told a breakfast meeting of the Israel Council on Foreign Relations in Jerusalem on Friday.Mitov, who accompanied Bulgarian Prime Minister Boyko Borissov on his two day visit to Israel, said that it had been very successful and that talks with Israeli officials had been most productive.Relating to the overall chaos in the Middle East, Mitov said that the world is witnessing a loss of territorial integrity and a rise of pseudo states.Mitov said that the tensions and turbulent events of the Middle East could shape the European agenda and are already provoking new isolated and unilateral decisions. “A conflict can quickly be turned into an ethnic or religious fire,” he said, adding that a guarantee of security is one of many shared interests of Israel and Europe.While confident that the fight against terrorism will eventually be won, Mitov was annoyed that more attention is being paid to the consequences of terrorism and the migration of refugees than to winning the fight against terrorism, which he said cannot be measured in days, but in civilian casualties.The conflicts in the region are religious, political, national and ideological, and will continue to recur until religion is put into a different context, he opined.There is already a push for change he said, “but it needs to gain speed.Europe can be part of the conversation without imposing solutions.”The big problem in international politics, as Mitov sees it, is lack of trust. “Trust is being lost among the major players. The EU is now shaped by circumstance. EU citizens expect us not to be shaped by history, but to make history. Otherwise other people will make history for us.”The EU functions brilliantly in times of calm, said Mitov, but in times of crisis, the EU lacks political integration. “European citizens want us to regain control. Right now, they feel we’re incapable.”The migration and refugee issue, which is a direct reaction to terrorism, is becoming increasingly worrisome, especially as fewer than half the people migrating to Europe are refugees, said Mitov.While advocating that EU resources should be applied to those who need them, “for the rest we have to apply an efficient repatriation process.”Turning to energy, which was one of the key areas of discussion between Borissov and Prime Minister Benjamin Netanyahu, Mitov said the security of Europe is largely dependent on energy. Bulgaria, in particular, is dependent on a monopoly for its supplies. This poses a security threat and is another reason why normalization of relations is so important to Europe, said Mitov, emphasizing that the Middle East is a significant source of energy resources.On the subject of security, Mitov was proud to report that there is no evidence in his country that any of Bulgaria’s Muslim citizens have joined ISIS or any other radical movement, but this knowledge does not have a calming effect, he said. “We need to take measures to prevent radical elements from coming to Bulgaria.”Ten percent of Bulgaria’s population is Muslim, Mitov noted, “but we have never had any trouble from them. They are all EU citizens.”