Women in Iran risk prosecution if caught contravening the ban, which was issued by ayatollah Ali Khamenei. 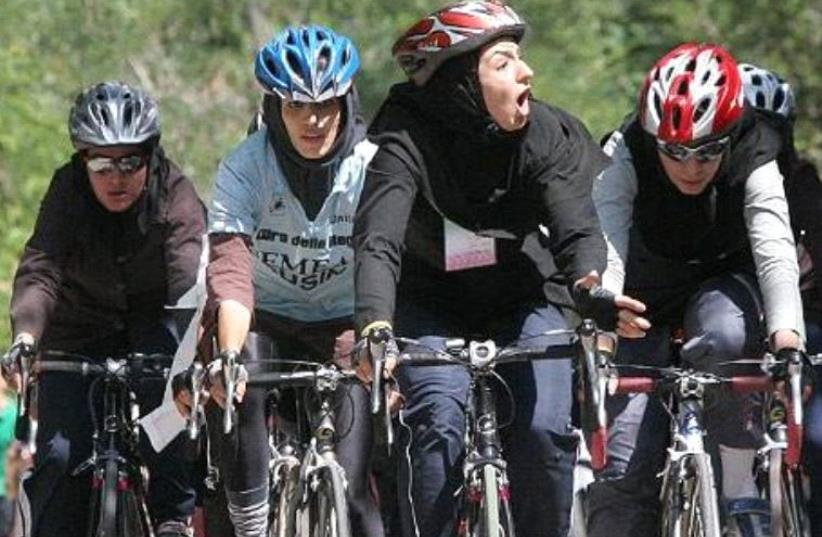 MY STEALTHY FREDDOM FACEBOOK
(photo credit: MY STEALTHY FREDDOM FACEBOOK PAGE)
Advertisement
In a bold act of civil defiance, Iranian women are taking to social media to upload pictures of themselves riding bicycles in direct breach of a recent fatwa issued by the country's religious autocrat.According to the BBC Wednesday, Iran's Supreme leader Ayatollah Ali Khamenei earlier this month issued a decree stating that women are prohibited from cycling in public or in the presence of strangers. "Riding a bicycle often attracts the attention of men and exposes the society to corruption, and thus contravenes women's chastity, and it must be abandoned," Khamenei told state media. In response, women have begun using social media as a form of protest, risking prosecution and possible jail time if caught defying the edict. One Facebook group, dubbed 'My Stealthy Freedom,' has already garnered over a million likes, and has received thousands of  image uploads along with over a dozen videos showing women throughout the Islamic Republic openly contravening social taboos, such as the bike ban. "Hello, we finished biking in the city just now. We were nine people, two more joined us in our path," one women said in a video posted to the Facebook group of herself riding a bike. "I will be proud that I did resist the oppression, as I believe those who oppress us are wrong," she added. "Biking for women is not a taboo, and no one can tell me it is."In another post, a mother and daughter duet issued a direct message to the ayatollah, saying: "we love cycling and we are not going to give up."Before now,  no rule had been instituted against women cycling in public throughout the country. But a number of clerics began raising concerns following a "car-free Tuesdays" campaign began earlier this year designed to limit the use of automobiles in order to cut down on pollution.The religious leaders claimed the activity subverts public decency and compromises the chastity of women.