Egypt's population continues to boom - and it means an uncertain future for the country. 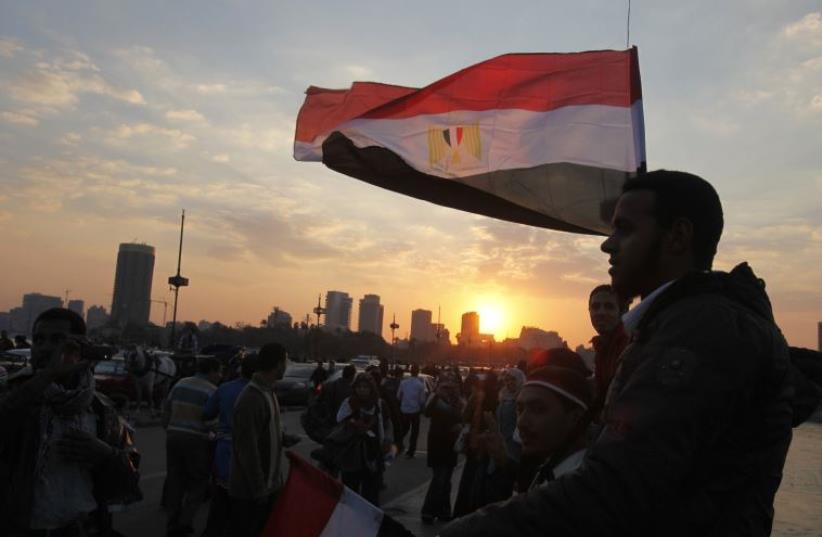 People stand on a bridge overlooking the river Nile as many Egyptians walk on the streets with Egyptian flags in Cairo
(photo credit: REUTERS)
Advertisement
Egypt is grappling with a challenge its president, Abdul-Fattah al-Sisi, has implied is as dangerous to the country’s future as terrorism: runaway population growth.The publication Saturday of results of a national census has heightened concern that the growth – about two million newborns a year – is smothering prospects for sustained economic recovery and could further swell the ranks of young people unable to find work, generating social unrest.The census put Egypt’s population at 94,798,827 million as of April, an increase of 22 million since 2006. Egypt’s population was 38.3 million in 1986 and 59.3 million in 1996.According to the census, Egyptians ages 15-34 make up more than a third of the population.If Egypt’s population continues to grow at the same rate – 30.2% over the last decade – it is set to double every 30 years, census coordinator Hussein Abdel Aziz told Egyptian journalists in remarks quoted by the Cairo-based Enterprise newsletter.As the London-based New Arab website reported Sunday, the Egyptian economy has shown some initial signs of recovery after years of turmoil following government reforms including the flotation of the Egyptian pound and lifting subsidies on fuel. Economic growth has risen to 4.3%, but inflation is soaring and further subsidy cuts promise to raise tensions.Youth unemployment is also soaring, with the economy unable to absorb the spiraling numbers of those seeking to enter the work force. Many young people do not have the skills to match the needs of the Egyptian market, and the economy is small, weak and insufficiently industrialized, says Ofir Winter, an Egypt specialist at the Institute for National Security Studies.“Instead of being something productive, the population growth is a barrel of explosives,” he said. “There are a lot of educated youths who are very frustrated by their inability to work and develop. It impacts on the younger generation from which revolutions can come.”Early this year, Egyptian government official Mohamed Abdel-Galeel termed population growth a monster that “swallows Egypt’s economy,” according to the website Al-Monitor. Development and bettering the lives of Egyptians can only be accomplished by curbing population growth, he said.The survey results have driven that point home. Television personality Amr Adib, who is close to the regime, said on his Kol Youm program that the results “belong to a wreckage, not a country.”Egyptian officials said one of the reasons for the high rate of population increase, most pronounced in rural areas, is that children there are viewed as additional sources of income.Religious conservatives from the Muslim Brotherhood and Salafist groups also view birth control as a violation of God’s will.Over the last two years, Sisi has identified population increase as one of the major threats to the country’s future, according to Yoram Meital, a Middle East scholar at Ben-Gurion University of the Negev.“He is aware that Egypt has very limited sources to even survive as a country and he decided to fight fiercely on the issue of population, to make a breakthrough on the economy by decreasing the population growth,” Meital said.“The government is very experienced with this issue,” he said, noting there have been failed attempts at population control since the era of Gamal Abdul Nasser in the 1960s.“They know it’s highly controversial but they understand that without tackling it Egypt will get into an even more difficult situation.“The government understands this is a marathon effort and that it will take them years and years of working on a new generation trying to shift their thinking in terms of how they perceive their family life and taking into account the number of kids they will have,” Meital said.The government has succeeded in getting the top leadership of Al-Azhar, the Sunni world’s highest religious authority that is state affiliated to back birth control and family planning as consistent with Islamic law. The argument is that the believer should look at what is in the best interest of society.But an active campaign in the countryside could risk alienating parts of the population there and help drive them into the disgruntled ranks of the brotherhood, observers in Cairo say.Still, that is a risk the government now may be inclined to take. Social Solidarity Minister Ghada Wali told Egyptian journalists Sunday that birth control programs will be established in upper Egypt, where the birth rate is highest.Meital cautions, however, that the government’s efforts may be doomed to failure if its struggle with the Muslim Brotherhood persists “because they are totally against anything the Sisi government suggests.”To succeed, the government’s efforts must be made alongside further economic reform and “seeking reconciliation” with brotherhood supporters to heal the split in Egyptian society.