‘Crucial’ Syria talks to begin this week amid cease-fire violations

The UK-based Syrian Observatory for Human Rights has recorded an uptick in cease-fire violations by both sides in recent days. 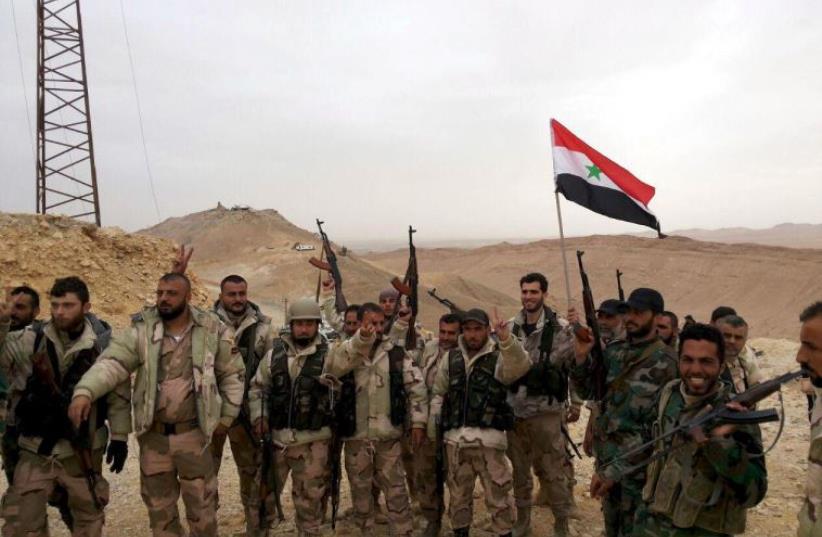 Forces loyal to Syria's President Bashar al-Assad flash victory signs and carry a Syrian national flag on the edge of the historic city of Palmyra in Homs Governorate, in this handout picture provided by SANA on March 26, 2016.
(photo credit: REUTERS)
Advertisement
WASHINGTON – Talks over Syria’s civil war set to begin this week will focus for the first time on the viability of a political transition for the war-torn country, a UN official said on Monday from Damascus.The second of three rounds of negotiations, scheduled to begin on Wednesday, will test the government of Syrian President Bashar Assad, whose deputies said just last month that his presidency is nonnegotiable. Rebels fighting for Assad’s ouster vow to continue the war unless he steps down.US Secretary of State John Kerry said last week that the set of three rounds of talks are a test of whether Assad is “capable” of negotiating “in good faith.” The first round, which recessed on March 24, produced meager results, but kept both parties at the table for a record period of time.“The Geneva talks’ next phase are crucially important,” said Staffan de Mistura, the UN’s special envoy to the crisis, on Monday, “because we will be focusing in particular on political transition, on governance, and constitutional principles. We hope and plan to make them constructive and we plan to make them concrete.”De Mistura has been conducting “proximity” talks between Assad officials and members of the High Negotiating Committee, a group tasked with representing Syria’s diverse rebel organizations. That means shuttling between different conference rooms in the same hotel, relaying messages.The UN hopes to bring both sides around the same table soon.After meeting with de Mistura, Assad’s foreign minister, Walid Muallem, said the regime would attend the talks without preconditions, according to Syrian state-run media. The minister went on to accuse rebel groups of trying to sabotage the talks by violating the cease-fire brokered by the US and Russia in February.While Russia’s Foreign Minister Sergei Lavrov said on Monday that the cease-fire is largely holding, de Mistura characterized the truce as “fragile.”“We need to make sure that it continues to be sustained even when there are incidents to be contained,” de Mistura said.The UK-based Syrian Observatory for Human Rights has recorded an uptick in cease-fire violations by both sides in recent days.According to Russia’s military general staff, fighters from the Nusra Front – a branch of al-Qaida – are amassing around the besieged city of Aleppo. The nationwide cease-fire does not provide cover for al-Nusra, Islamic State or any other group internationally cast as a terrorist organization.