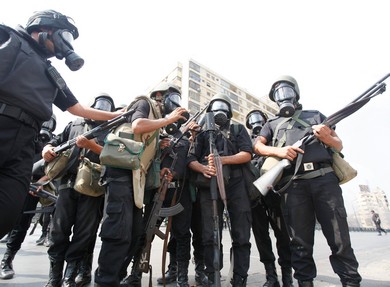 "The reports of deaths and injuries are extremely worrying," Michael Mann, a spokesman for EU foreign policy chief Catherine Ashton said. "We reiterate that violence won't lead to any solution and we urge the Egyptian authorities to proceed with utmost restraint."Turkey and Qatar joined the EU's calls for a halt to the violence. Turkey's President Abdullah Gul said an armed intervention by Egyptian security forces against pro-Morsi protesters in Cairo was "completely unacceptable"."Armed intervention on civilians, on people demonstrating ... This is completely unacceptable," Gul told reporters in the capital Ankara.Turkey has emerged as one of the fiercest international critics of what it has called an "unacceptable coup" after Egypt's military ousted the elected Morsi.Turkish Prime Minister Tayyip Erdogan called on the UN Security Council and Arab League to take immediate steps to stop a "massacre" in Egypt, saying international silence had paved the way for the Egyptian authorities' violent crackdown."The international community, especially the UN Security Council and Arab League, must act immediately to stop this massacre," Erdogan's office said in a statement.
Iran, whose hardline Islamist leadership put down post-election unrest by force in 2009, denounced the Egyptian bloodshed and called for a "national dialogue and democratic process".In a statement, the Foreign Ministry expressed deep concern and added: "Undoubtedly the current approach ... strengthens the likelihood of civil war in this great Islamic country."Qatar took the lead in Arab criticism of the violence, condemning the attack on the protest camp and urging Egyptians to return to dialogue to ease the crisis polarising the Arab world's most populous nation.A Qatari Foreign Ministry official, quoted by the state news agency QNA, said Egyptian authorities should "refrain from the security option in dealing with peaceful protests, and preserve the lives of Egyptians at protest sites".Qatar strongly backed Morsi's Muslim Brotherhood government before he was ousted by the army a year after becoming the first freely elected leader in Egyptian history."Qatar believes that the safest and guaranteed way to resolve the crisis is a peaceful way based on dialogue between parties that have to live together in a pluralist social and political system," the official said.QATARI AIDEnergy-rich Qatar, among the world's wealthiest states and under authoritarian dynastic rule, gave Egypt $7 billion in aid after his election last year following the 2011 uprising that toppled longtime autocrat Hosni Mubarak.In the Palestinian Gaza Strip, a spokesman for the ruling Islamist Hamas movement, which arose out of the Egyptian Muslim Brotherhood, said Hamas "condemns the massacres ... and calls for an end to bloodshed and a halt to the killing of peaceful protesters".European Union foreign policy chief Catherine Ashton said she was following the situation with great concern."Confrontation and violence is not the way forward to resolve key political issues. I deplore the loss of lives, injuries and destruction in Cairo and other places in Egypt. I call on the security forces to exercise utmost restraint and on all Egyptian citizens to avoid further provocations and escalation," she said in a statement.Britain, France, Germany, Spain and Norway all appealed for mutual restraint by Egypt's factions and for negotiations to resolve the crisis. Britain said it had advised its citizens visiting Egypt to avoid demonstrations and large gatherings."It is essential that violence stop and conciliation prevail. France calls on all sides to show restraint and hold back from disproportionate use of force," French Foreign Ministry spokesman Vincent Floreani said.German Foreign Minister Guido Westerwelle said: "We expect the transitional government and Egyptian authorities to allow peaceful protest and do everything to ease the situation."
Advertisement
Subscribe for our daily newsletter