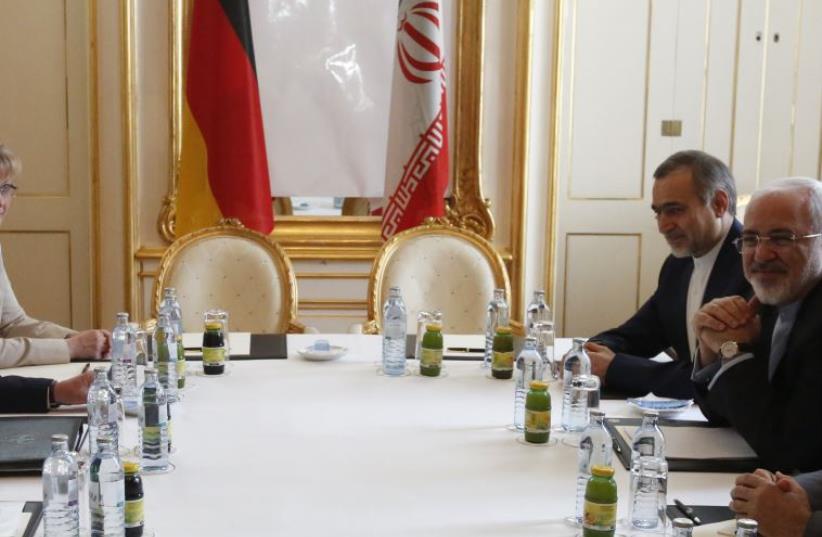 Iranian FM Javad Zarif (R) waits for the start of a bilateral meeting with Germany in Palais Coburg, the venue for nuclear talks in Vienna, Austria, July 2, 2015.
(photo credit: REUTERS)
Advertisement
VIENNA -- The foreign ministers of Britain, France, Germany and the European Union all said on Thursday that a final nuclear agreement with Iran is not yet guaranteed, with some key political questions still unanswered.The two-year diplomatic effort has entered its endgame, now two days past a self-imposed deadline for world powers and Iran to reach a comprehensive accord which will govern Iran's nuclear work for over a decade.The arrival of Europe's ministers in the Austrian capital, where US Secretary of State John Kerry and Iranian Foreign Minister Mohammad Javad Zarif have been for days, coincided with a critical meeting in Tehran between the head of the United Nations' nuclear watchdog, the International Atomic Energy Agency, and Iran's president.The IAEA says it must secure access across all of Iran such that it can verify the correctness and completeness of Tehran's future nuclear declarations. That, they say, will require the occasional inspection of Iran's military sites.Iran's leadership has so far ruled out granting any access to its military sites. And Iran's supreme leader, Ayatollah Ali Khamenei, has suggested that the UN watchdog is a partisan agent of Western governments.EU high representative on foreign affairs Federica Mogherini called the IAEA meetings in Iran "very important.""The effort of all parties to reach success is genuine," Germany's foreign minister,  Frank-Walter Steinmeier, said. "The open question, which I cannot answer you yet, is whether the will and courage will be sufficient among all at the end."But Britain's foreign secretary, Philip Hammond, told the press to expect movement over several days."The work goes on," Hammond said. "You are going to see ministers coming and going to maintain the momentum of these discussions. I don't think we're at any kind of breakthrough moment yet and we will do whatever we need to do to keep the momentum."