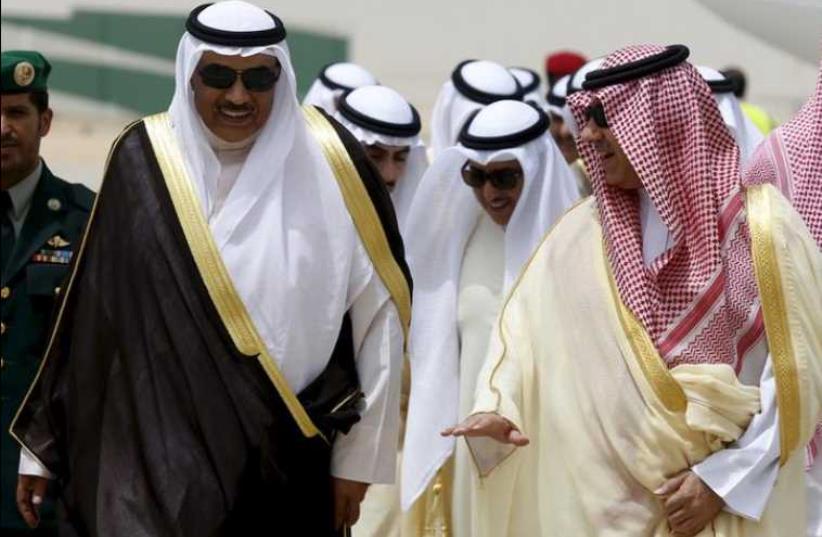 Kuwait's Foreign Minister sheikh Sabah al-Khaled al-Sabah.
(photo credit: REUTERS)
Advertisement
In order to back a nuclear agreement with Iran, leaders of the six-nation Gulf Cooperation Council are seeking new weapons technologies and major security guarantees from the White House to ensure the Sunni countries a military edge over Shi'ite Iran in the region, the Wall Street Journal reported Saturday.With a slated meeting with US President Barack Obama on May 13, leading Persian Gulf representatives plan to leverage their sought-after support as grounds for requesting additional fighter jets, drones, missile defense systems, and surveillance equipment. They reportedly expressed interest in the F-35 jet, an advanced US fighter known as the Joint Strike, sold thus far in the Middle East exclusively to Israel and Turkey to maintain military balance in the region.They also plan to pressure Obama into drafting new defense agreements between the Gulf Nations and the US to ensure intervention in the region should they feel threatened by Iran, the Wall Street Journal report said.The reported requests pose problems for US officials who want to appease the Gulf allies whilst maintaining Israel's military upper-hand in the region. Approving the quid pro quo exchange threatens to further strain US-Israel relations, already tense amid developments made in the nuclear deal negotiations. Senator Lindsey Graham expressed his concern over this possibility, telling the Journal, “I’m very worried that President Obama will promise every military toy they’ve always wanted and a security agreement short of a treaty, with the understanding they have to be sympathetic to this deal.” “If I get a hint of that, a whiff of that, then I would do everything I could to block every bullet and every plane,” he said.According to congressman Eliot Engel, Obama is addressing concerns posed by the Arab allies and is seriously considering their requests. He told the Journal, "I think they have a legitimate concern about Iran,” but assured that Israel's military upper-hand would be maintained should the US concede to the requests of the Gulf nations.