Senior official of Shi'ite Lebanese group tells local media that secret relations between Riyadh and Jerusalem led to the Saudi decision to classify Hezbollah as a terrorist organization. 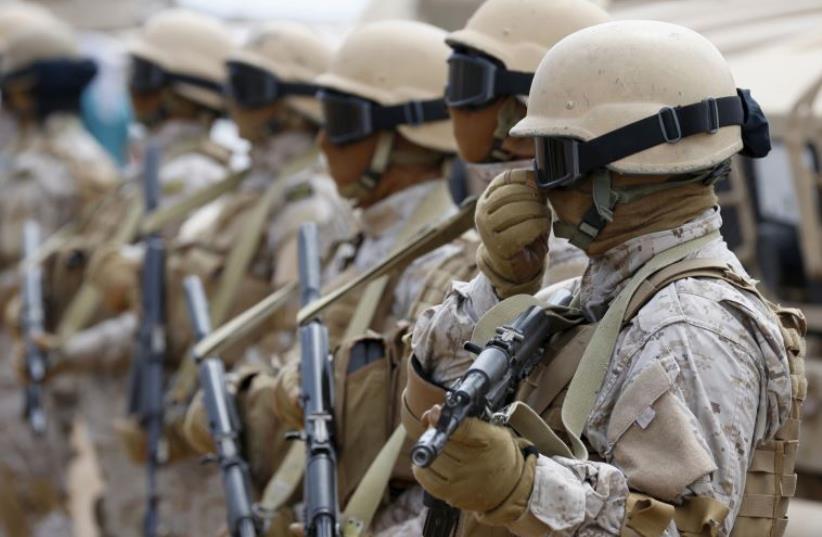 Saudi troops
(photo credit: REUTERS)
Advertisement
A Hezbollah official claimed on Sunday night that “Israel is training dozens of Saudi military officers” under the framework of alleged clandestine ties between the two countries.Hezbollah deputy leader Naim Qassem told Lebanese media that the secret relations between Riyadh and Jerusalem led to the Saudi decision, as part of the Arab League and the Gulf Cooperation Council, to classify Hezbollah as a terrorist organization.On March 2, the Saudi-dominated GCC made the designation, opening up the possibility of further sanctions against the Iran-allied group that wields influence in Lebanon and fights in Syria. Shortly afterward, the Saudi-led Arab League also classified the Lebanese Shi’ite organization as a terrorist entity.The labeling of Hezbollah as a terrorist organization is part of a struggle pitting Sunni-governed Saudi Arabia against Shi’ite regional heavyweight Iran. The rivals back different factions in Lebanon where Hezbollah wields enormous political influence and has a powerful military wing.The senior Hezbollah official added that “the Saudis are currently fulfilling the cycle of the Israeli project in public and secret meetings.” Qassem pointed to remarks made earlier in April by Saudi Foreign Minister Adel al-Jubeir after Egypt transferred control of two Red Sea islands to Saudi Arabia as indicating such ties.Riyadh, in its declaration following the April 10 transfer, maintained a frosty posture to Israel denying any direct relationship between the Sunni-led kingdom and the Jewish state due to the return of the islands.But in an apparent allusion to Egyptian- Israeli relations, al-Jubeir added, “There is an agreement and commitments that Egypt accepted related to these islands, and the kingdom is committed to these.”Qassem concluded that Riyadh “has for years avoided providing aid to the Palestinian resistance or the Palestinian people, and has not cooperated with Iran regarding the interests of the region and its stability.”