On Wednesday, the editors of the Shi'ite site Janubia announced that "the site has been witnessing threats from Hezbollah's activists on social media networks in the past few hours." 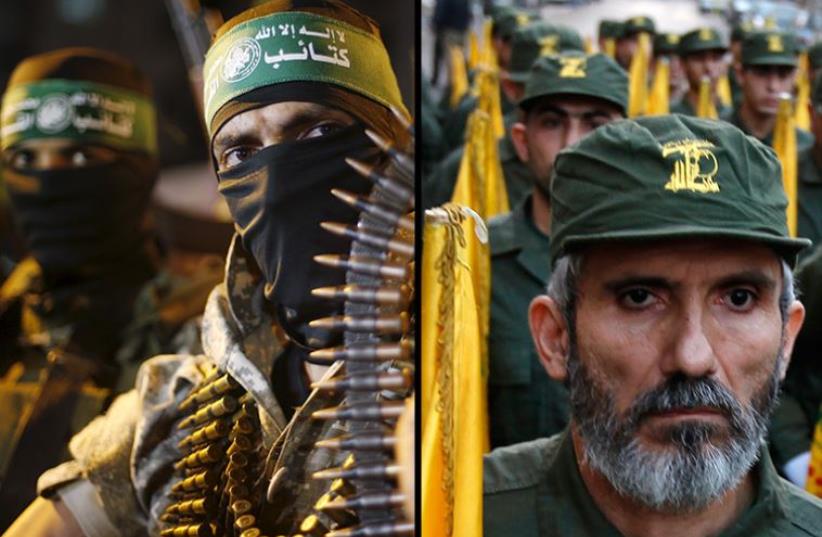 Hamas and Hezbollah fighters
(photo credit: REUTERS)
Advertisement
Hezbollah supporters launched a social media campaign against a Shi'ite news site opposing the terror organization, describing it as an "Israeli agent," Lebanese media reported.On Wednesday, the editors of the Shi'ite site Janubia announced that "the site has been witnessing threats from Hezbollah's activists on social media networks in the past few hours." A statement released on the site about Hezbollah's campaign read: "The neutral and moderate policy of Janubia which opposes anything hurting Lebanese nationalism is considered by Hezbollah as espionage for Israel. Anyone opposing the Iranian project of Hezbollah and refusing to obey its policies is accused by the organization of espionage.""The existence of a Shi'ite voice opposing Hezbollah poses a greater threat to the organization than the weapons of its Sunnis opponents, since it comes from within the country," the statement further read. According to the editors, the site is very popular in Lebanon, with 50,000 to 60,000 people who visit it daily.Janubia's statement followed a statement by Hezbollah's activists that was spread on social media networks. The statement read: "Lebanese security sources reported that the IDF's spokesman to Arab media, Avichai Adraee, started inspecting the contents of Janubia, the site operated by journalist Ali Amin, a personal friend of Adraee."The attack on the Shi'ite site may reflect a growing fear among Hezbollah's activists about their organization's image in Lebanon. It was Saudi Arabia's decision to halt military aid to Lebanon that signaled the beginning of the Lebanese protest against Hezbollah. The protest continued this week, with the broadcast of a TV show mocking Hezbollah Secretary General Hassan Nasrallah.