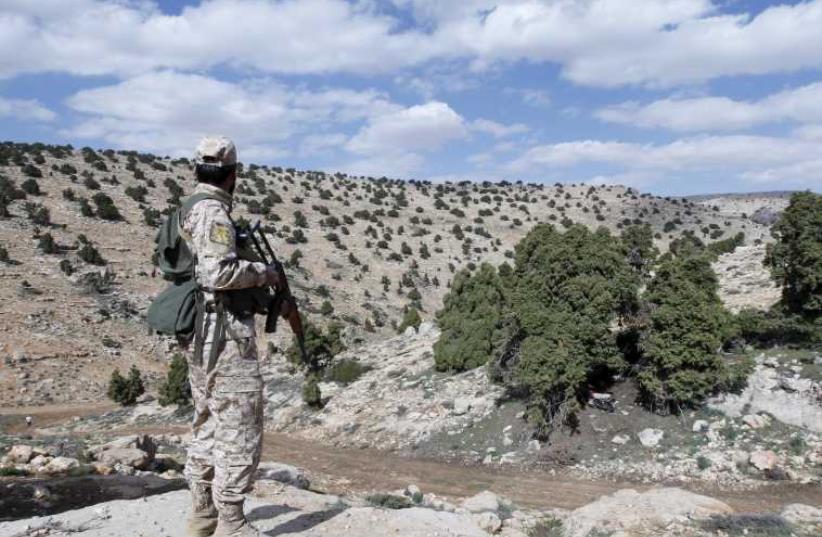 A Lebanon Hezbollah fighter carries his weapon as he stands in Khashaat, in the Qalamoun region
(photo credit: REUTERS)
Advertisement
Hezbollah fighters captured two hilltops from al-Qaida’s Syria-wing Nusra Front in areas close to the Lebanese border and have killed dozens of enemy combatants, Hezbollah-run al-Manar television reported Monday.It said the group had captured Quba’a and Naqar in Syria’s southwestern Quinetra province, which lies close to Lebanon and Israel.Hezbollah has backed President Bashar Assad in Syria’s civil war. The group’s leader, Hassan Nasrallah, has vowed to clear the border area of Sunni groups that have carried out attacks on Lebanese soil.Nasrallah fully defended his group’s war in Syria on Sunday playing down the sectarian nature of the war and instead framing it in terms of defending Lebanon and the region from the jihadist threat.Meanwhile, Lebanon announced Monday that it retains its right to liberate villages still “occupied” by Israel, the Lebanese Daily Star reported.A statement by the Foreign Ministry marking the withdrawal of the IDF from south Lebanon in 2000 declared “Lebanon’s right to liberate the remaining territory still under Israeli occupation by all legitimate means.”Lebanon “will spare no effort to convey this national, unanimous position to the international community until finally putting an end to Israeli violations of Lebanese sovereignty, ending occupation and full Israeli withdrawal from Lebanese territory,” it said.The UN ruled at the time that Israel had withdrawn from Lebanese territory.A statement by an Israeli Foreign Ministry spokesperson in 2002 and posted on the ministry’s website, clarifies that the Mount Dov area, as recognized by the UN, was Syrian, not Lebanese territory.Hezbollah has used Mount Dov as a pretext in its continued attacks against the Jewish state.Nasrallah told thousands of supporters via video link that Hezbollah was willing to increase its presence in Syria when needed and that the fight was part of a wider strategy to prevent groups like Nusra Front and Islamic State from taking over the region.“Our presence will increase whenever it should... Yes, we are not present in one place in Syria and not the other. We will be everywhere in Syria,” he said during a celebration to mark the Israeli withdrawal.He added that Hezbollah’s offensive in Qalamoun would last “until the borders are secured.”Nasrallah went on to accuse its domestic rivals from the Sunni Future Movement of supporting the jihadist groups and warned that “they will be the first victims,” according to al-Manar. He addressed the Christians, asking who would protect them from this threat.Nasrallah called on the region to unite against the jihadists.The leader also warned that the US could not help them against the jihadists.“Soon, it will be the Islamic State anniversary of occupying Mosul... The international coalition, led by the United States, what have they done? Let’s not talk politics or intentions, but what have they done?” said Nasrallah, according to the Star.The head of the Future Movement, former prime minister Saad Hariri, countered Nasrallah’s speech saying the state is responsible for protecting the country, not Hezbollah.“We, in the Future Movement, declare publicly that the Lebanese state and its legitimate institutions are our guarantee, our choice and our salvation,” Harari said in a statement following Nasrallah’s speech, the Star reported.“Defending the land, sovereignty and dignity is not the responsibility of Hezbollah, neither in Arsal, nor in its outskirts, or in any other area,” said Hariri.Hariri also rejected Nasrallah’s call for unity in Lebanon and the region to fight the jihadists: “The popular mobilization equation has no place in Lebanon. We will not cover any call for it under any circumstances,” he said.“But if what is required is to disengage Lebanon from the fires in the region, the issue is very simple. We go back to the state, unite around its authority and support the army and the legitimate security forces in protecting the borders and facing the dangers of terrorism, wherever it comes from,” added Hariri.